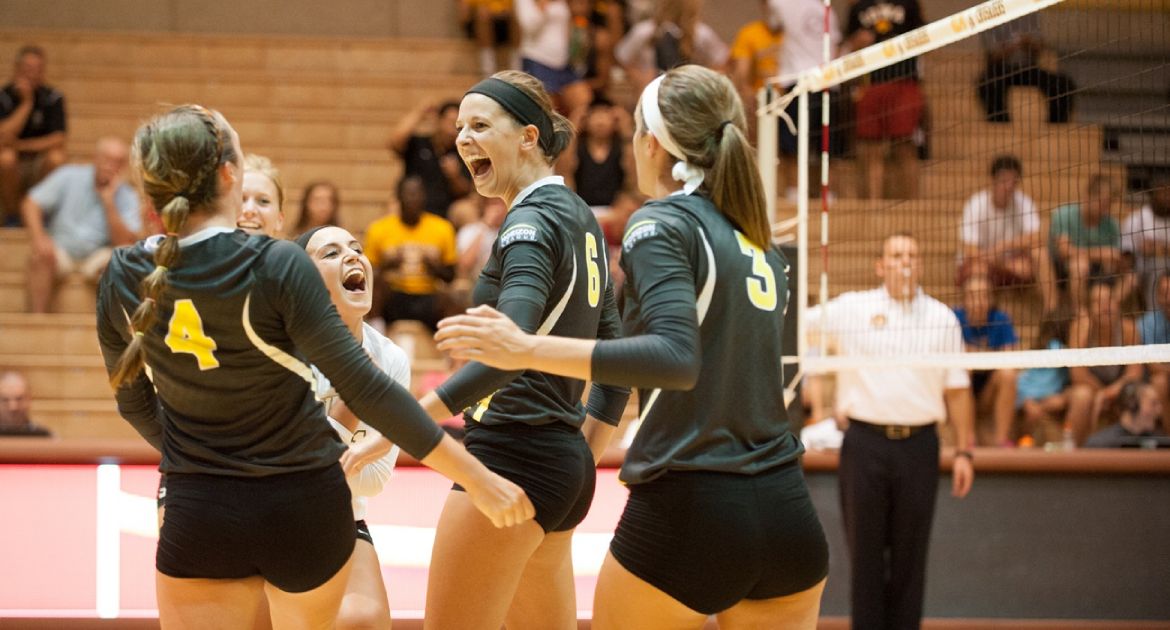 Crusaders close out first half of league play, step outside of the league for a pair of matches

This Week in Crusader Volleyball: The Valparaiso volleyball team returns home to the ARC to wrap up the first half of Horizon League play against UIC Friday evening.  The Crusaders then step out of league action for a pair of non-league contests, hosting North Dakota State on Sunday evening before traveling to Chicago to take on Chicago State Tuesday night.

Previously: The Crusaders split a pair of Horizon League road contests last weekend.  Valpo started the weekend by falling 3-1 at Oakland, but rebounded with a straight-set sweep of Wright State in Dayton Saturday afternoon.

Following the Crusaders: Live video through the Horizon League Network, as well as live stats, will be available for both home matches this weekend through ValpoAthletics.com. HLN will carry free live video of each of the Crusaders' league matches and all home non-league matches, while select matches will be covered by Valpo's student radio station, WVUR [95.1, Valparaiso], as well. In addition, most matches will have live stats available online.

Head Coach Carin Avery: In her 13th season as head coach at Valparaiso, Carin Avery has won 303 matches and has led Valpo to three league regular season and tournament titles, as well as three NCAA Tournament appearances. A two-time league Coach of the Year, Avery has coached 40 All-League recipients over her tenure as Crusader head coach. She is Valpo’s all-time leader in both victories and winning percentage, and owns 358 career victories overall as a head coach.

Series Notes: UIC – The Crusaders own a 25-23 edge in the all-time series over the Flames, but are a commanding 13-3 against UIC since joining the Horizon League.  Valpo won both matchups in the series last season, defeating UIC 3-1 in Chicago and sweeping the Flames at the ARC.

Chicago State – Valpo is 40-1 all-time against the Cougars, including road wins in Chicago each of the last four seasons.

Scouting the Opposition: UIC – The Flames enter the weekend at 9-12 overall, but are 3-3 in Horizon League action, sweeping matches at Wright State and at Oakland last weekend.  Stephenee Yancy, who transferred to UIC from Western Michigan prior to the season, leads the Flames and the Horizon League, hitting .353 with 4.17 kills/set.

North Dakota State – The Bison sit at 7-13 on the season and are 2-5 in Summit League action, with a Saturday night match at IPFW on the docket prior to Sunday’s meeting.  Jenni Fassbender leads NDSU with 3.17 kills/set, while Emily Miron and Emily Minnick each average 2.82 kills/set and hit just a click below .300.

Chicago State – The Cougars are 6-14 overall this season, but are 0-6 within WAC play.  Chicago State plays on the road at New Mexico State before hosting the Crusaders on Tuesday.

Milestone for Beil: Senior Morgan Beil, just one weekend removed from a record-setting performance [highest hitting percentage for a four-set match], reached a big milestone last Friday night at Oakland.  With her third kill of the match, Beil registered the 1,000th kill of her Crusader career, making her just the 14th player in Valpo volleyball history to reach four figures in kills.  Beil enters this week with 1,011 career kills, just 66 terminations shy of the Crusaders’ all-time top-10 in the category, while she is also tied for Valpo’s all-time hitting percentage record currently (.280).

Best Start: The Crusader volleyball team had never gone as deep into a season before sustaining its second loss as they did this season, winning 14 of its first 15 matches before suffering the loss at Milwaukee.  This season also set a new mark for the most wins Valpo has had in a season before losing for the third time (16-2), as the 2010 squad previously held the best mark at 13-2 before losing its third match.  This year’s team has a few more wins to go to reach the mark for most victories before a fourth loss, as the 2004 team opened the season 20-3 before suffering its fourth defeat.

Players of the Week: Buoyed by her record-setting performance against CSU, Beil earned Offensive Player of the Week honors from the Horizon League office, the first career weekly honor for the senior since she was a freshman. Beil became the third different Crusader to earn a league weekly award this year, as Emily Campbell and Allison Ketcham earned accolades in back-to-back weeks in mid-September.

Not Going Down Easy: While the Crusaders lost at Oakland last week, Valpo forced the Golden Grizzlies to go four sets for the win, continuing a string of being competitive in losses.  The loss at Oakland was actually the first of the Crusaders’ three defeats this season not to go a full five sets. In fact, going back to last year, over Valpo’s last 36 matches, it has lost just seven times, and five of those losses have gone a full five sets.

Continued League Success: Since joining the Horizon League prior to the 2007 campaign, the Crusaders have been very successful in league play and are looking to continue that success this season. Valpo owns a 75-37 (.670) mark in league play over the last seven years and has finished above .500 in all seven seasons. Four times, the Crusaders have finished in second place in the league standings and have never finished below fourth place.