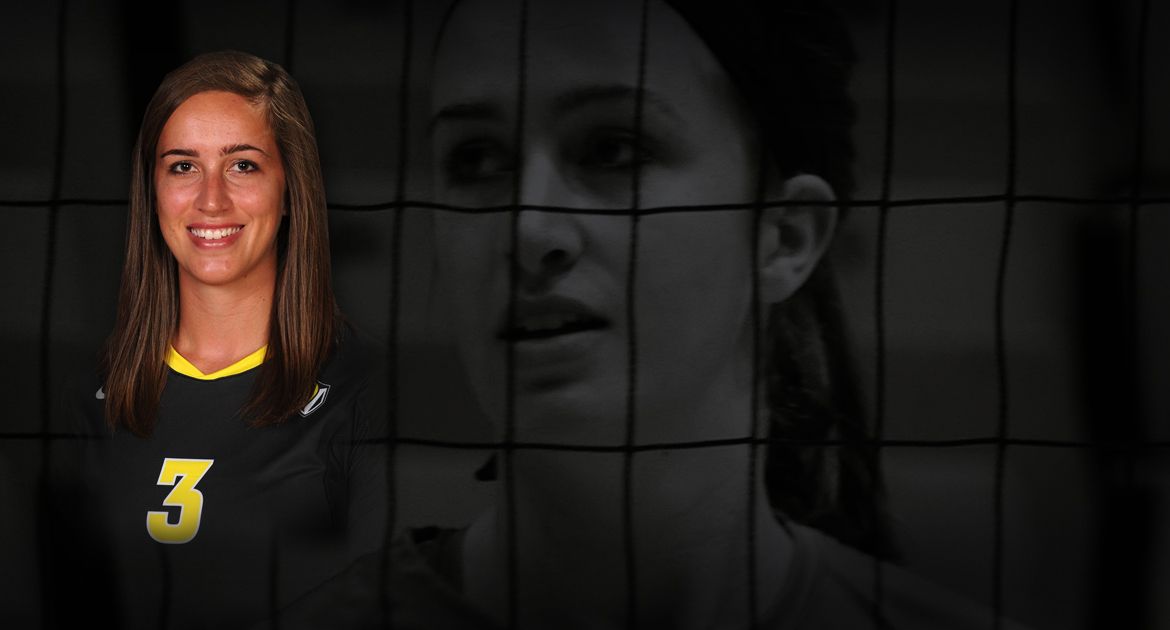 Watching volleyball, one’s attention is naturally drawn to big plays.  A huge kill from an outside hitter.   A big block at the net by a middle.  A diving, one-handed dig by the libero to keep a point alive.

What you might not notice is the play of the right-side hitter.  Someone who just goes out and does their job, picking up ten to 12 kills a match, hitting at a solid clip.  Someone at Valparaiso who, very quietly over their four-year career, has become one of the most accomplished players in program history.

And Crusader senior Morgan Beil is perfectly fine with that.

Beil has been a virtually silent assassin over her four-year career, quietly racking up over 1,000 kills.  She is poised to finish among the top-ten in Crusader history in kills and ranks second all-time in hitting percentage.  Most impressively, if she earns All-Horizon League honors this season, Beil will become just the second four-time All-League honoree in the last decade.

All this from someone who has flown under the radar and, by her own admission, was looking elsewhere before her visit to Valparaiso.

“Valpo was actually the last school I looked at, and I had been interested in going somewhere else before I came on my visit,” said Beil.  “As soon as I stepped on campus and started talking to the girls, I just got a different feeling than anywhere else I had been. I loved everything the coaches said about the program and I liked how successful [head coach] Carin [Avery] had been.”

But Avery knew she wanted Beil as part of the Crusader program – not just for her ability on the court, but for her off-court intangibles as well.

“Morgan had such a great arm swing when you watched her play, and caused a lot of people a lot of problems as a lefty middle in club,” said Avery.  “But also, every single person I talked to had nothing but wonderful things to say about her and about her family.  That's something that we really care about in our recruiting process, so from the second we met them, we knew they would be a perfect fit.”

Coming onto campus as a freshman, Beil was content to sit back and wait her turn.  Little did she know that she would not only end up a major contributor to the 2011 Crusader squad, but she would end up being named an All-Horizon League honoree – the only freshman to earn a spot on the team.

“I was not expecting to play right away at all,” said Beil.  “Carin had asked me how I felt about redshirting when I came on my visit, so I had no idea if it would happen or not. My parents didn't even come to my first tournament because they didn't expect me to play. From early on, the upperclassmen were very complimentary of my play, so I thought maybe I would play a little, but had no idea that I would be in the starting lineup.”

“Honestly, we did think that she would come in and contribute right away, because she was that good of a player and we needed her position at the time,” said Avery on Beil’s playing time as a freshman.  “She came in and filled that position wonderfully.  I was a bit surprised she made All-League that season – not because she didn’t deserve it, but because it can be so tough for a freshman to come in and beat out upperclassmen.”

That freshman season has been a springboard for a standout career for Beil, one in which she feels she has grown tremendously on the court.

“I was successful in high school, but Carin showed me just how much more I could add to my game,” said Beil.  “I remember my first spring and just how many more shots I was able to add to my arsenal. I learned from players who were better than me, and from coaches who could show me exactly what to do to be more successful.”

The accolades have rolled in year after year for Beil as she’s developed and grown as a player – a myriad of All-Tournament teams and All-League honors, spots up and down the Crusader record books.  But this year, Beil has undertaken maybe her most significant growth – going from someone who Avery described as a “very quiet person, someone who does not like to be the center of attention” to a senior mentor to Valpo’s younger players.

“This season, Morgan’s had to learn how to become a leader,” said Avery.   “She’s had to learn how to be in the forefront of things, and it’s been wonderful as a coach to see her grow that way.  Also, she’s a great example for our younger players because of her strive for excellence in the classroom.  Morgan’s just such a wonderful combination of a great human being, a wonderful student and a stellar athlete.”

“Leading by example is definitely my preference, but I have definitely tried to be more of a vocal leader this year,” said Beil.  “We have had such great leaders in the past, so I’ve tried to step up and fill their roles. I am so fortunate to have Lindsey (Hauch) and Kelsey (Victor) with me because I would not have been able to lead a team by myself.”

With Beil paving the way, both as a senior leader and with her output on the court, the Crusaders are on the brink of another 20-win campaign, while she is right in the discussion for her fourth All-League honor.  But, as you would expect from someone who has willingly flown under the radar throughout her career, the priority for Beil is on the team goals heading into the final weeks of the season.

“Individually, I do have a few more goals I would like to achieve, including finishing with my last All-League team,” said Beil.  “However, the team goal is what comes first, and that is to peak at the conference tournament and close out what has already been a successful season and career.”

Whatever happens over the final few weeks of the season, try to take a few moments and focus on the play of the right-side hitter, because you’re getting to see the final stages of one of the great careers in Valpo volleyball history – no matter how quietly Morgan Beil might have gone about it.