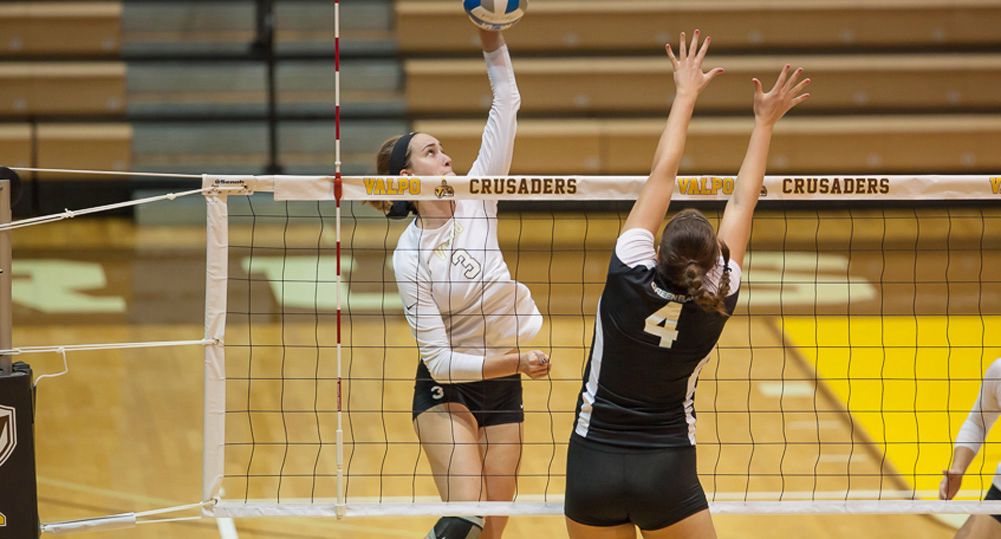 “This was a good road win tonight,” said Crusader head coach Carin Avery.  “We were able to get everybody into the match for a little bit tonight.  We will take the win, and work on the things that hurt us tonight during this week of practice.  This helped us prepare for our last league game on Saturday.”

Each of the first four sets saw the eventual winner claim control by the halfway mark, as the Crusaders won the first two frames before the Mastodons rallied to take sets three and four.  Then, in the fifth set, Valpo used a 5-1 run to pull ahead 11-7.  The Crusaders maintained the lead, as a kill from sophomore Emily Campbell (Grand Rapids, Mich./Forest Hills Central) gave Valpo match point at 14-12.

The Mastodons held off Valpo with a kill and a Crusader attack error to force extra points at 14-all.  But a kill from junior Kelsey Berrington (Britton, Mich./Tecumseh) gave the Crusaders their third match point chance, and senior Morgan Beil (St. Louis, Mo./Marquette) and junior Nicole Lambert (St. Charles, Ill./East [Radford]) combined on a block to close out the win.

Campbell registered a match-high 23 kills on .314 hitting to pace the Crusaders on Tuesday.  Campbell now has 440 kills on the year, just three terminations shy of Valpo’s single-season top-ten with at least two matches remaining.  The sophomore also tallied ten digs for her 18th double-double of the year.

Freshman Allison Ketcham (Mishawaka, Ind./Marian) also recorded a double-double on Tuesday, including a match-best 25 digs, her seventh effort of at least 20 digs on the season.  Ketcham added ten kills as well.  Berrington handed out 48 assists on the evening and narrowly missed a double-double with eight digs, while she also registered five blocks, just one shy of her career best.

Valparaiso (23-7) closes out the regular season Saturday afternoon at UIC in a battle for seeding in the Horizon League race.  First serve is slated for 5 p.m., with live video and live stats available at ValpoAthletics.com.