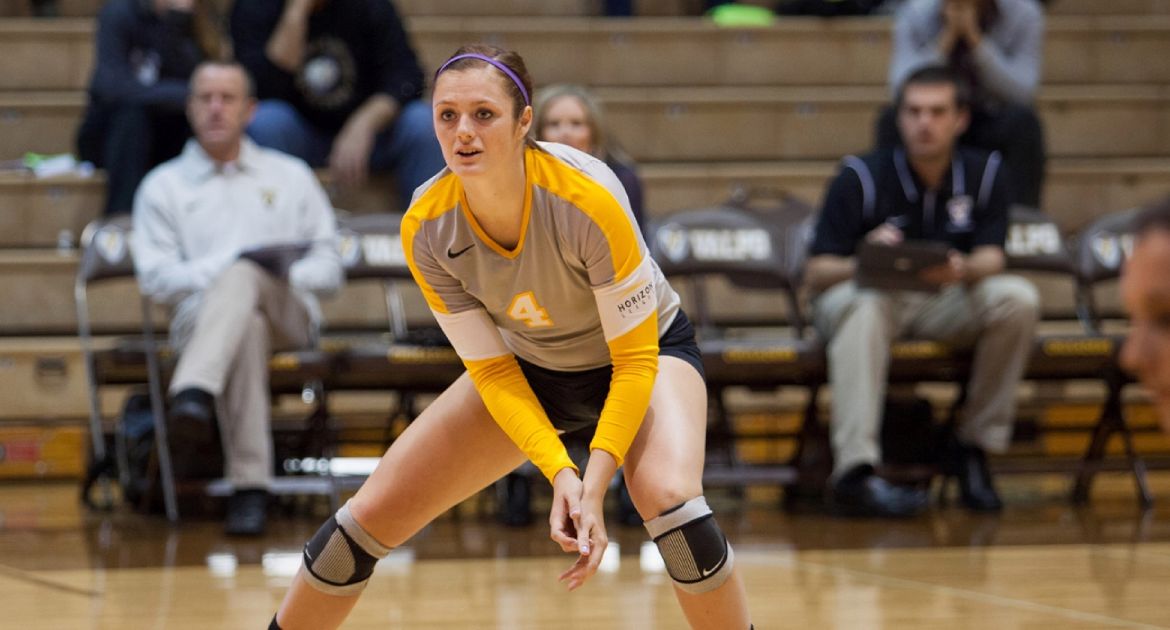 This Week in Crusader Volleyball: The Valparaiso volleyball team finishes up the regular season in a battle for seeding for the Horizon League Championship, as the Crusaders make the short trip up to UIC for a Saturday evening matchup.

Previously: Valpo split its final home weekend of the season last week, sweeping Wright State before falling to Oakland in four sets. The Crusaders then finished out non-league play with a five-set win at IPFW.

Following the Crusaders: Live video through the Horizon League Network, as well as live audio and live stats, will be available for the UIC match through ValpoAthletics.com. HLN will carry free live video of each of the Crusaders' league matches and all home non-league matches, while select matches will be covered by Valpo's student radio station, WVUR [95.1, Valparaiso], as well. In addition, most matches will have live stats available online.

Head Coach Carin Avery: In her 13th season as head coach at Valparaiso, Carin Avery has won 309 matches and has led Valpo to three league regular season and tournament titles, as well as three NCAA Tournament appearances. A two-time league Coach of the Year, Avery has coached 40 All-League recipients over her tenure as Crusader head coach. She is Valpo’s all-time leader in both victories and winning percentage, and owns 364 career victories overall as a head coach.

Series Notes: The Crusaders own a 25-24 edge in the all-time series over the Flames, but are a commanding 13-4 against UIC since joining the Horizon League. In the first meeting of the season, though, it was the Flames who escaped the ARC with a four-set victory in a match where all four sets were decided by just two points.

Scouting the Opposition: UIC enters Saturday afternoon's match at 14-15 overall this year and 7-6 in league play following a four-set win over Loyola Friday evening. Stephenee Yancy is the front-runner for Horizon League Player of the Year, leading the league in both kills (4.39/set) and hitting percentage (.361).

Battle For Seeding: Following Friday's matches, the match between the Crusaders and Flames will be for third place in the league standings. With a win, Valpo would finish alone in third place and face sixth-seeded UIC in the first round of the Horizon League Championship (which will be hosted by Oakland). A loss would leave Valpo and UIC tied for third position, with the Flames owning the tiebreaker - that result would give the Crusaders the fourth seed and a first-round matchup with fifth-seeded Youngstown State.

13 Straight 20-Win Seasons: The Crusaders have continued their tremendous streak of success again this season. Valparaiso has won 20 or more matches every year since 2002, Avery’s first at the helm of the Crusader program - a streak which now sits at 13 consecutive seasons. Valpo is one of just 10 programs nationwide to have won at least 20 matches each year from 2002 through 2013, and was just the fifth team to reach the milestone again in 2014.

Campbell Continues to Crush: Sophomore Emily Campbell continues to rank among the league's leaders in kills and is on pace to finish among the top-ten in Crusader history in a single season in the category. Campbell paced Valpo in each of its last three matches, tallying 12 kills against Wright State, 21 kills versus Oakland and a match-high 23 kills against IPFW. Campbell, who ranks second in the league with 4.31 kills/set. now has 440 kills on the year, just three terminations shy of Valpo’s single-season top-ten.

Victor Cracks the Block Chart: Senior Kelsey Victor combined for 12 blocks over the Crusaders' last three matches to continue her march up Valpo's career blocks chart. Victor has totaled 352 career blocks, with her last rejection against the Mastodons moving her past Jill Rychecky for eighth place in Valpo history in blocks.

Ketcham Picks Up Another Honor: Freshman Allison Ketcham earned her second Defensive Player of the Week nod from the Horizon League office after pacing the Crusaders in digs two weekends ago. Ketcham opened with a 14-dig effort in the Crusaders’ win over Cleveland State, and followed with a team-best 21 digs in the victory at Youngstown State, matching the most digs by a Crusader in a three-set match this season. Ketcham is the highest ranking non-libero in the league both overall (3.63 digs/set) and in league-only play (4.46 digs/set) in digs. She is the first Crusader freshman to earn multiple Player of the Week awards from the Horizon League office since Taylor Root picked up a pair of honors as a rookie in 2009.