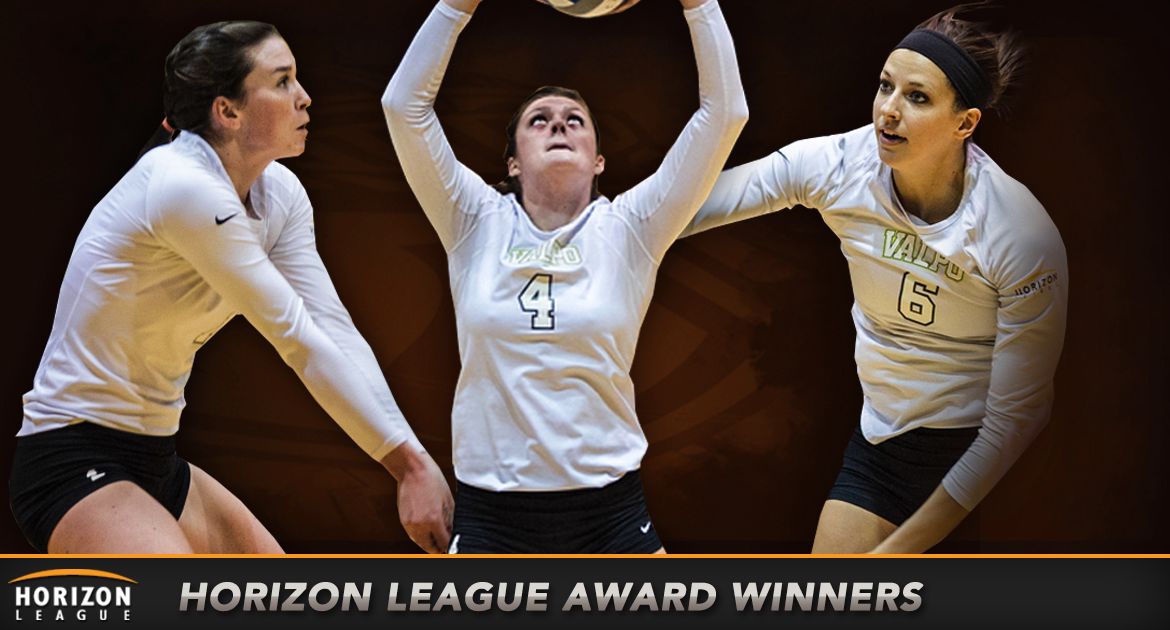 The Valparaiso volleyball team was well represented on Monday as the Horizon League announced its postseason awards as voted on by the league’s head coaches, highlighted by the selection of sophomore Emily Campbell (Grand Rapids, Mich./Forest Hills Central) as the league’s co-Player of the Year.  Campbell was joined on the All-League team by senior Kelsey Victor (Logansport, Ind./Logansport) and junior Kelsey Berrington (Britton, Mich./Tecumseh), while freshmen Taylor Graboski (Upper Sandusky, Ohio/Upper Sandusky) and Allison Ketcham (Mishawaka, Ind./Marian) both earned spots on the All-Freshman Team.

Campbell paced the Crusaders all season along on the attack, averaging 4.35 kills/set on the season, second-best in the league.  The sophomore has 457 total kills this year, already ninth in a single season in program history.  In league play, Campbell raised her average to  4.43 kills/set, also good for second in the league.  Strong in the back row as well, she averaged 2.96 digs/set overall and 3.49 digs/set in Horizon League play, the latter mark ranking ninth in the league and second-best among non-liberos.  Campbell picked up 18 double-doubles on the season, including ten in league action.

Victor earned her first career All-League honor after a stellar campaign on both sides of the ball.  The senior closed the regular season as the league leader in blocks/set, totaling 123 rejections overall this year.  In league-only play, Victor raised her average to 1.27 blocks/set, good for second in the league.  She has totaled 358 career blocks, ninth-most in program history.  On the attack, Victor raised her hitting percentage more than 100 points from last season, hitting .317 on the year, a mark which would rank second in Crusader single-season history.  In league play, she was even stronger, hitting at a league-best .385 clip.

Berrington, who was an All-Newcomer team selection two seasons ago, earned her first career All-League honors as well.  The Crusader setter tallied 1,231 assists on the regular season, averaging 10.80 assists/set, and handed out 11.32 assists/set in league play.  The junior is just 13 helpers shy of Valpo’s single-season top-ten in the category.  Berrington has run the offense all season long to the tune of a .253 hitting percentage, on pace to shatter the Crusaders’ previous single-season record.  She has also been a contributor on the back line, averaging 2.75 digs/set and tallying a team-high 19 double-doubles.

Ketcham made a strong debut on both sides of the ball as a freshman for Valpo in 2014.  The six-rotation outside hitter was especially stellar defensively in the back row, averaging 3.58 digs/set, ninth-most in the league.  Two times the league Defensive Player of the Week, Ketcham bumped that mark up to 4.29 digs/set in league-only action, seventh-best in the league.  Both marks were highest among non-liberos in the Horizon League.  Offensively, Ketcham posted 2.12 kills/set and reached double figures in kills on nine occasions, recording eight double-doubles.

Graboski joined Ketcham on the All-Freshman Team, making Valpo the only program with multiple honorees on the seven-player squad.  The Crusaders also placed two players on the All-Freshman team for a second straight year.  The middle hitter was a regular in the Valpo rotation all season long, standing out defensively with 72 blocks, second-most on the team.  Graboski raised her average to 0.81 blocks/set in league-only play.  Offensively, the freshman averaged 1.83 kills/set and hit .264 overall, ninth-best in the league.