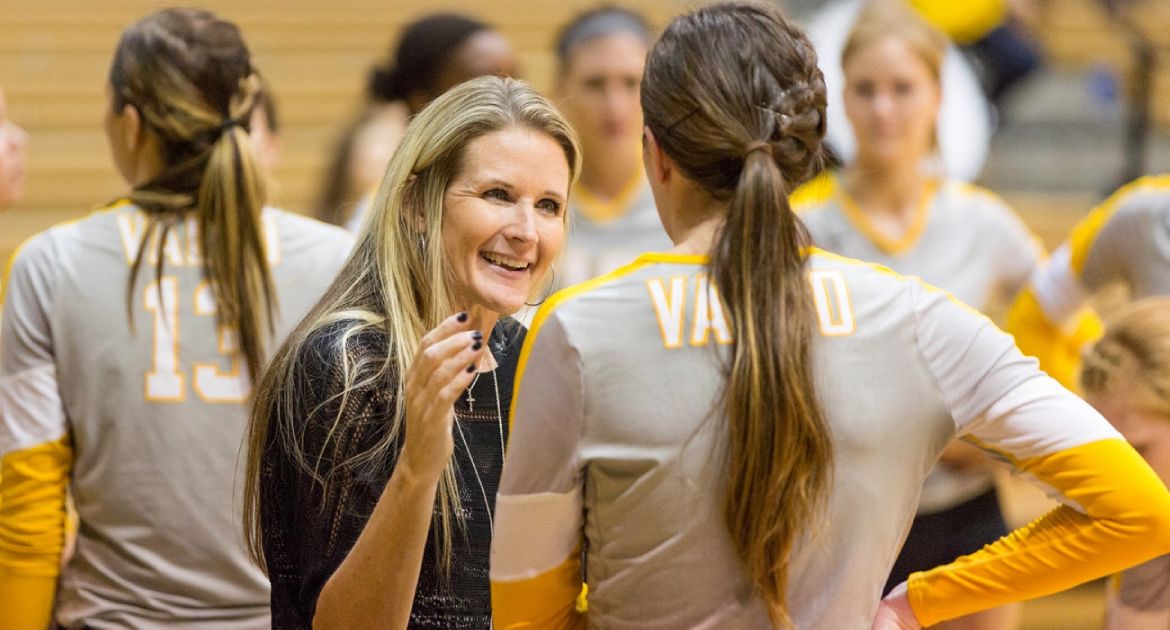 Carin Avery announced the signings of three incoming freshmen for next season.

Valparaiso volleyball head coach Carin Avery announced today that Sydney Bronner, Katherine Carlson and Lizzie Zaleski each signed National Letters of Intent during the early signing period and will join the Crusader volleyball program as freshmen for the 2015 season.

Bronner comes to Valpo from Frankenmuth [Mich.] H.S.  The 6’2” middle hitter was a Third Team All-State honoree as a senior and earned All-Conference, All-Region and All-Area honors for a second straight season after tallying 413 kills and 113 blocks on the season.  As a sophomore, Bronner earned a spot on the special mention list of PrepVolleyball.com’s top sophomores.  A versatile athlete, Bronner also is a three-time state champion in track and field.

“Sydney could be one of the most athletic players that we have ever recruited,” said Avery.  “She has been a state champion in track and field, and has a tremendous vertical - everything you want in a middle hitter.  The exciting thing about Sydney is that she has not come close to hitting her ceiling in volleyball - we can't wait to get her here to start training and see how far she can go.”

Carlson comes to Valpo from Pontiac Notre Dame Prep in Michigan, where she was named Michigan Miss Volleyball this season as a senior.  The 5’11” outside hitter also earned All-American honors from MaxPreps and the AVCA and was an Under Armour Honorable Mention All-American following her final season with the Fighting Irish.  As a junior, she helped lead Notre Dame to a state championship and was runner-up for PrepVolleyball.com Junior of the Year.  She was named MaxPreps National Sophomore of the Year in 2012 and was a finalist for the same award at PrepVolleyball.com.  Carlson earned All-State accolades in each of her final three seasons as well.

“Katherine is a special six-rotation player,” said Avery.  “She has great ball control and has the ability to control matches when she touches the ball.  She also has a super-high volleyball IQ and has done nothing but been a winner in both high school and club volleyball.  She doesn't know how to lose, and for us to take the next step, we need players like Katherine who know how to win.”

Zaleski comes to Valpo from Marist [Ill.] H.S.  The 6’0” right side hitter/setter was recently named MVP of the 2014 SportsTown Chicago All-Star Game after leading her team to victory.  A two-time All-Conference honoree, Zaleski earned First Team All-Area accolades from the Chicago Sun-Times and the SouthTown Star this season as well.  She served as team captain for the RedHawks during her senior season.

“With Lizzie, you get the best of both worlds,” said Avery.  “She has a dynamic left arm and is a super-athletic attacker, and she also sets as well.  She could give us an interesting look in our offense with her ability to do many things.  Lizzie is from a great high school program, where she was a tremendous leader, and she knows how to win.”

The trio joins a Valparaiso program which won 25 matches in 2014 – the 13th consecutive season that the Crusaders have won at least 20 contests.