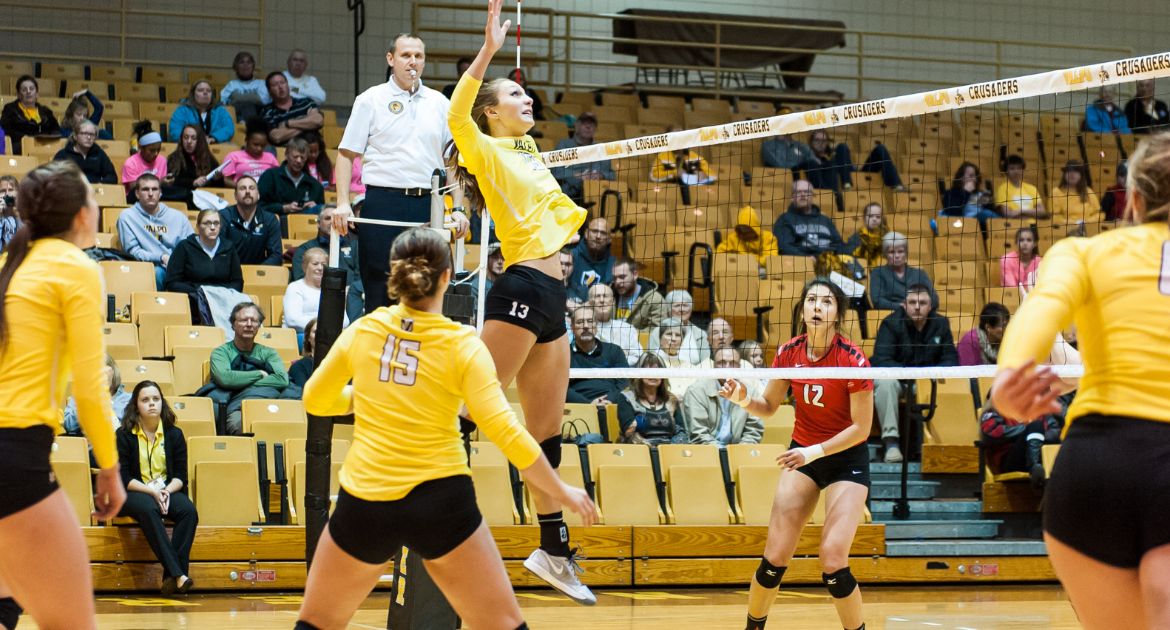 at Trojan Invitational – Troy, Ala.

This Week in Crusader Volleyball: The Valparaiso University volleyball team returns to action this weekend as the Crusaders travel south to Troy, Ala. to take part in the Trojan Invitational. Valpo will face New Mexico State and the host Trojans on Friday before concluding the tournament versus Austin Peay on Saturday.

Previously: The Crusaders posted a 2-1 record on the opening weekend of action versus a strong mid-major field at the Black Knights Invitational. Valpo claimed wins over CSU Bakersfield (3-1) and host Army West Point (3-2) while dropping a five-set decision to Hofstra.

Looking Ahead: Valpo opens the home slate next weekend, hosting the Popcorn Classic. The Crusaders will welcome SE Missouri State, Central Michigan, South Dakota State and Duquesne to the ARC for the two-day, eight-match event which kicks off Friday morning, Sept. 9.

Following the Crusaders: All three matches this weekend will have live stats available through ValpoAthletics.com. In addition, Troy will be providing live video of all tournament matches as well.

Head Coach Carin Avery: In her 15th season as head coach at Valparaiso, Carin Avery has won 341 matches (341-133) and has led Valpo to three league regular season and tournament titles, as well as three NCAA Tournament appearances. A two-time league Coach of the Year, Avery has coached 40 All-League recipients over her tenure as Crusader head coach. She is Valpo’s all-time leader in both victories and winning percentage, and owns 396 career victories overall as a head coach.

Series Notes: The Crusaders will be meeting New Mexico State for the first time. Valpo is 3-0 all-time versus Troy, including a sweep last season at the Chattanooga Classic. The Crusaders have also won both previous matchups with Austin Peay, with the most recent victory coming in 2002 - Carin Avery's first at the helm of the Valpo program.

Scouting the Opposition: New Mexico State - The Aggies posted a 1-2 record in their first weekend of action. NMSU won the WAC title last year with a perfect 14-0 mark in league play and went 28-6 overall.

Austin Peay - The Governors sit at 2-2 through four matches, most recently dropping a mid-week match to Western Kentucky. APSU went 10-22 last season and recorded a 4-12 record in the Ohio Valley.

All-Tournament Honors: Senior Emily Campbell and junior Taylor Graboski represented the Crusaders on the All-Tournament Team at the Black Knights Invitational. Campbell, who earned All-Tournament honors for the fifth time in her career, reached double figures in kills in each of the Crusaders’ three matches on the weekend, highlighted by posting 17 kills on .310 hitting in the win over CSU Bakersfield. Graboski, an All-Tournament honoree for the fourth time, hit .312 for the weekend, including matching her career high with 15 kills and hitting at a .405 clip in the win over Amy, and posted 12 blocks.

Zaleski Steps Into New Role: After playing primarily as a right-side hitter in her first season as a Crusader, sophomore Lizzie Zaleski saw regular action at setter in the opening weekend of play. Zaleski posted double-doubles in all three matches and averaged 5.14 assists and 2.21 digs per set for the weekend. She set new career highs in both assists and digs over the course of the weekend, posting 30 assists in the win over Army West Point and 11 digs in the victory over CSU Bakersfield.

Bruinsma Sees Action at Libero: Senior Rachel Bruinsma has seen time at outside hitter, middle hitter and as a back-row player over her time at Valpo, but found herself in a new position in the match versus Army West Point last weekend. Bruinsma was tabbed as the Crusaders' libero for the match against the Black Knights and responded by nearly doubling her previous career best for digs as she finished with a match-high 27 digs in the win.

New Career Highs: Zaleski and Bruinsma were far from the only Crusaders to post career bests over the course of the season's first tournament. Sophomore Kayla Currier matched her career high with seven blocks in the win over CSUB, while sophomore Katherine Carlson bested her previous career high with 16 kills in the same match. Meanwhile, senior Jamie Lacheta set a new career best with four blocks versus CSUB and matched that mark the very next day against the Black Knights.

Record Book Watch: Early on in the 2016 season, a pair of Crusaders rank among the program’s all-time best in their respective statistical categories. Senior Emily Campbell enters this weekend with 1,190 career kills – good for sixth in program history, just five shy of fifth place and within striking distance of second position (1,505 kills). Meanwhile, fellow senior Morganne Longoria owns 1,610 career digs entering this weekend, already good for fifth on the program’s all-time chart and just 43 out of fourth place.