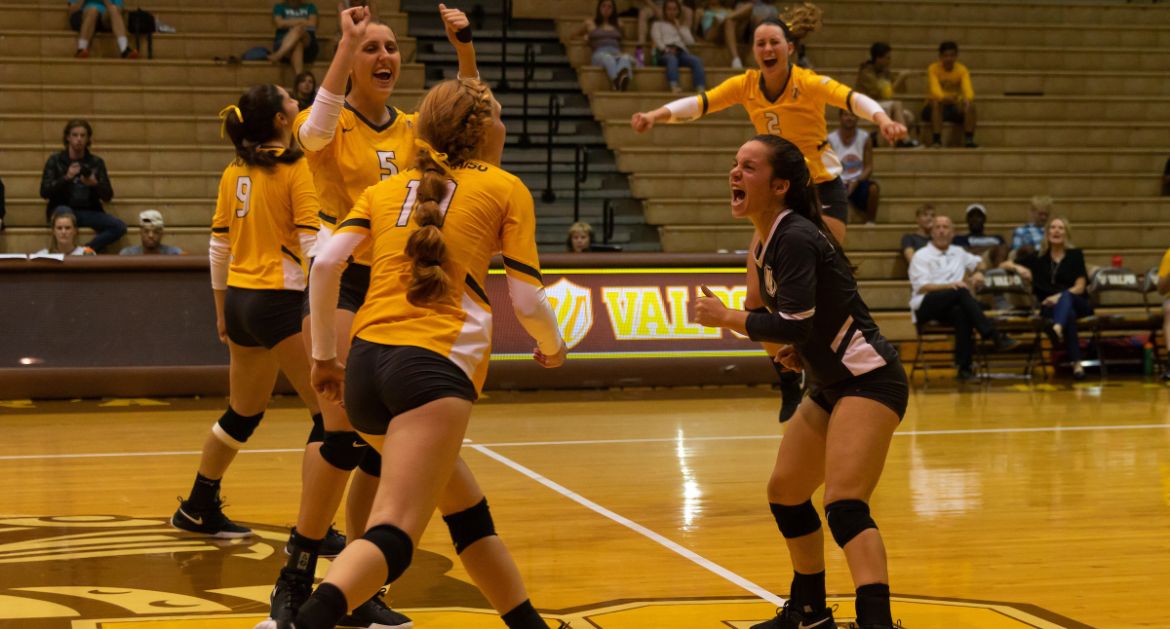 This Week in Valpo Volleyball: The Valparaiso University volleyball team passes the halfway mark of the MVC slate this weekend as it hosts the conference’s other two Indiana institutions. Friday night brings Evansville to the ARC, while Saturday night, Valpo will face Indiana State in the program’s annual Pink Match, where it will be raising money for the American Cancer Society.

Previously: Hurt by injuries in the middle, Valpo dropped back-to-back road matches last weekend for its first consecutive losses of the year, losing 3-1 at Illinois State and 3-0 at Bradley.

Looking Ahead: Next weekend brings three matches in a four-day stretch, as Valpo hits the road to face UNI (10/26) and Drake (10/27) before returning home for a Monday evening (10/29) contest with Missouri State.

Following the Action: Both matches this weekend will be broadcast as part of the season-long package with The Valley on ESPN, as both contests will air on ESPN+. Live stats will be available as well.

Head Coach Carin Avery: In her 17th season as head coach at Valparaiso, Carin Avery has won 389 matches (389-172, .693) at the helm of the Crusaders and has led Valpo to three league regular season and tournament titles, as well as three NCAA Tournament appearances. A two-time league Coach of the Year, Avery has coached 55 All-League recipients over her tenure at Valpo. She is Valpo’s all-time leader in both victories and winning percentage, and owns 444 career victories overall as a head coach.

Back-to-Back Defeats: The consecutive losses last weekend at Illinois State and at Bradley marked the first time Valpo has dropped back-to-back matches this season. It also is just Valpo’s second 0-2 weekend since joining The Valley, and the first since opening Valley play last year with home losses to Drake and UNI.

Hart Steps In: With senior middle Sydney Bronner sidelined last weekend due to injury, freshman Haley Hart made her first two career starts at Illinois State and at Bradley, tallying 12 kills and four blocks over the two matches.

RPI Ranks: Despite dropping both matches last weekend, Valpo still sits in strong position in the latest NCAA RPI release, coming in at 60th nationally. Valpo is one of three MVC squads in the top-60, joined by UNI (22nd) and Illinois State (47th). Valpo has posted a top-100 RPI finish just three times in the tenure of head coach Carin Avery, and not since 2008 (67th). Valpo’s best-ever RPI finish came in 2004, when it clocked in at 55th position.

Among the Nation’s Best: Coming into this week, only North Dakota has racked up more total digs than Valpo, as the team sits at 1,537 digs through 23 matches. Valpo is also eighth in digs/set, ninth in total kills, 12th in total assists, 22nd in opponents’ hitting percentage and 28th in win/loss percentage. Individually, Brittany Anderson sits 42nd in assists/set, Peyton McCarthy 47th in blocks/set, and Rylee Cookerly 49th in digs/set.

McCarthy Shuts Down Hitters: After registering just 16 blocks in 48 sets played last season as a freshman, sophomore middle Peyton McCarthy has come into her own this season as a defensive force at the net, entering the weekend leading the MVC and ranking 47th nationally with 1.25 blocks/set. McCarthy, who is just five blocks shy of hitting 100 for the season, tallied a career-best nine rejections in Valpo’s five-set come-from-behind win over Loyola in the last home outing.

Top-Ten Within Reach: The head-to-head battle for the most career kills between seniors Katherine Carlson and Allison Ketcham is rapidly approaching a battle for positioning on Valpo’s career top-10 chart in the category as well. Carlson and Ketcham, who both already rank among the top-10 in program history in another statistical category (Carlson - aces; Ketcham - digs), could both surpass the current holder of 10th place - Morgan Beil; 1,099 kills - this weekend, as Ketcham enters the weekend with 1,075 kills and Carlson 1,073 kills. Once both hit 1,134 career kills, which is the current ninth-place mark of Sarah Dooms, they will both be within the top-10, making them the only classmates to both sit in the top-10 of the category.