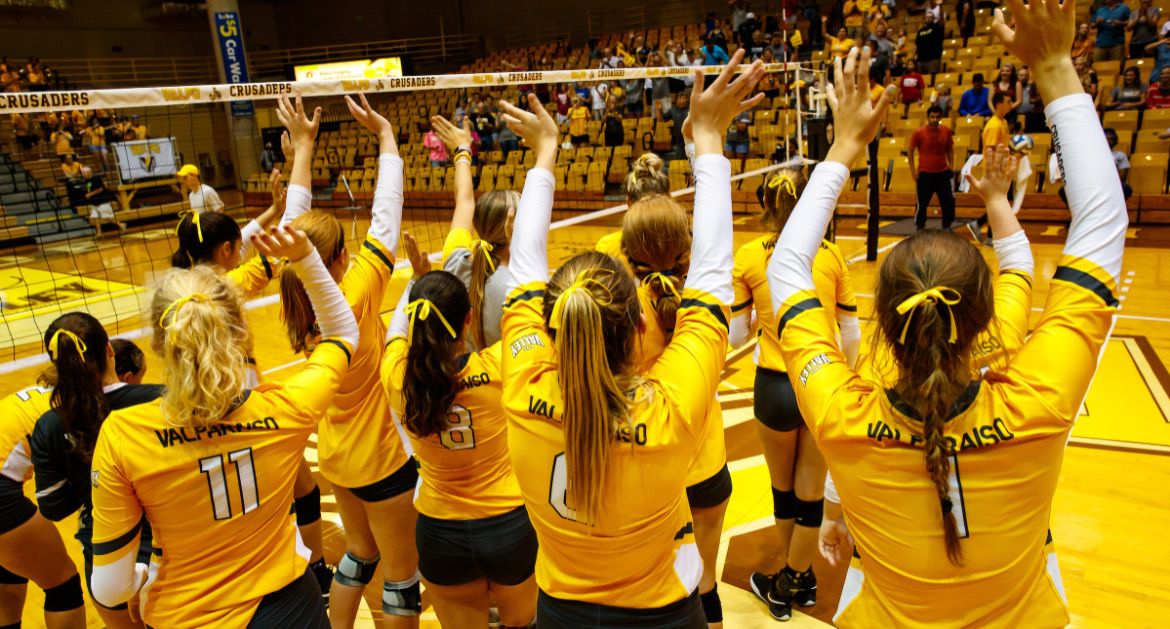 While the successful 2018 campaign for the Valparaiso University volleyball program carries on, excitement for the future of the program is in the air as well, as head coach Carin Avery announced today that eight high school seniors have signed with Valpo and will join the team as freshmen for the 2019 season.

Bechtold was an All-Conference honoree this year as a senior and earned All-Tournament honors at Lincoln-Way Central’s tournament. Previously her team’s Offensive Player of the Year as a sophomore, Bechtold has earned scholar-athlete honors each of her four years of high school and played her club volleyball for Ultimate Volleyball Club.

Bechtold on why she chose Valpo: “I chose Valpo because of the great academics and athletics offered, in addition to the very welcoming campus. My future coaches and teammates really made me feel like I was a part of the family when I first met them.”

Boyer earned All-State Special Mention in 2018 as a senior, also picking up First Team All-Area and First Team All-Conference accolades. A member of the Under Armour watch list heading into the season, Boyer led the DuKane Conference in kills this year. Boyer was a part of the AAU National Champions in the summer of 2018, and has been an AVCA Academic All-American each of the last three years.

Boyer on why she chose Valpo: “I chose Valpo because it feels like home. The coaches, players, professors and counselors are extremely welcoming and enthusiastic. They make me feel like part of a family. The athletic and nursing programs are challenging and exceptional. I knew Valpo would be a perfect fit for me from the very beginning.”

Cooper earned All-District, All-Area and All-Conference honors each of the last two years for LaPorte H.S. She earned the team’s Blocking Award each of her four varsity seasons and concluded her career as the school’s record holder for career solo blocks. Cooper is also an Academic All-State recipient.

Cooper on why she chose Valpo: “I was immediately drawn to the welcoming team and coaches, and the volleyball program’s continued success year after year. Valpo also has strong academics, which is important to me.”

Geise is an Honorable Mention All-State honoree who also has twice earned All-Area and All-District accolades and is a three-time First Team All-Conference selection. A two-time Academic All-Conference choice as well, she competed in the Iowa Senior All-Star Game this fall. Geise leaves Roland-Story H.S. as the school’s career and single-season record holder in kills.

Geise on why she chose Valpo: “I chose Valpo because of how awesome the school is! I loved the program, and the girls on the team were so welcoming. The coaches are experienced and have high volleyball IQs, which will help me become an even better player with them coaching me the next four years. Overall, Valpo just seemed like the perfect fit for me and I can’t wait to be a Crusader next fall!”

A four-year starter for Edwardsburg H.S., Leach helped lead her squad to a district championship this fall. She was a First Team All-Conference and All-Region honoree as a junior and earned Honorable Mention All-State mention. A member of the Under Armour Phenom list as a junior, she made the Under Armour All-America list as a senior.

Pease was a four-year starting setter for Marin Catholic H.S., helping lead her squad to four section titles and three league championships, as well as the #1 ranking in Division III three years in a row. A two-time First Team All-League honoree, she helped Marin Catholic to 132 victories in her four years. Playing club for Absolute Volleyball Club, she was a member of teams that finished fifth at USAV Junior Nationals each of the last two years and was an All-Tournament Team honoree in 2017. Pease was also named a Fab 50 player by Prep Volleyball.

Pease on why she chose Valpo: “I chose Valpo because of the culture and atmosphere. I love the team dynamics, coaching philosophies and the overall experience on campus. I’m looking forward to studying nursing and giving my best to the Valpo Volleyball program!”

Ravotto is a two-time First Team All-State honoree and earned First Team All-Conference accolades in all four seasons starting for Marian H.S. Conference MVP as a senior, she holds school records for single-game and career kills, and is also a member of the school’s 1,000-kill/1,000-dig club. On the club circuit, she was named to the All-Tournament Team at JVA Nationals at the 16u level.

Ravotto on why she chose Valpo: “I chose Valparaiso University because it is a place that I can see myself excelling – not only on the court, but also in the classroom and in building lifelong relationships. The Valpo community is a place where I felt at home after my first visit. I look forward to starting a new chapter in my life as a Crusader!”

Speck was a Third Team All-State honoree as a junior and has earned All-Region and First Team All-Conference accolades in each of the last two seasons. She helped lead Whitmore Lake H.S. to a district title as a junior, earning Team MVP honors. She closed her high school career as the school’s career leader in hitting percentage and blocks. Speck was listed on Prep Dig’s Top 50 list as a junior and as a senior, and was a member of the 2018 Ultra Ankle JVA watch list.

Speck on why she chose Valpo: “Valpo feels like home to me. From the welcoming and competitive volleyball team, to the challenging, wide range of academic choices, Valpo is where I want to be.”