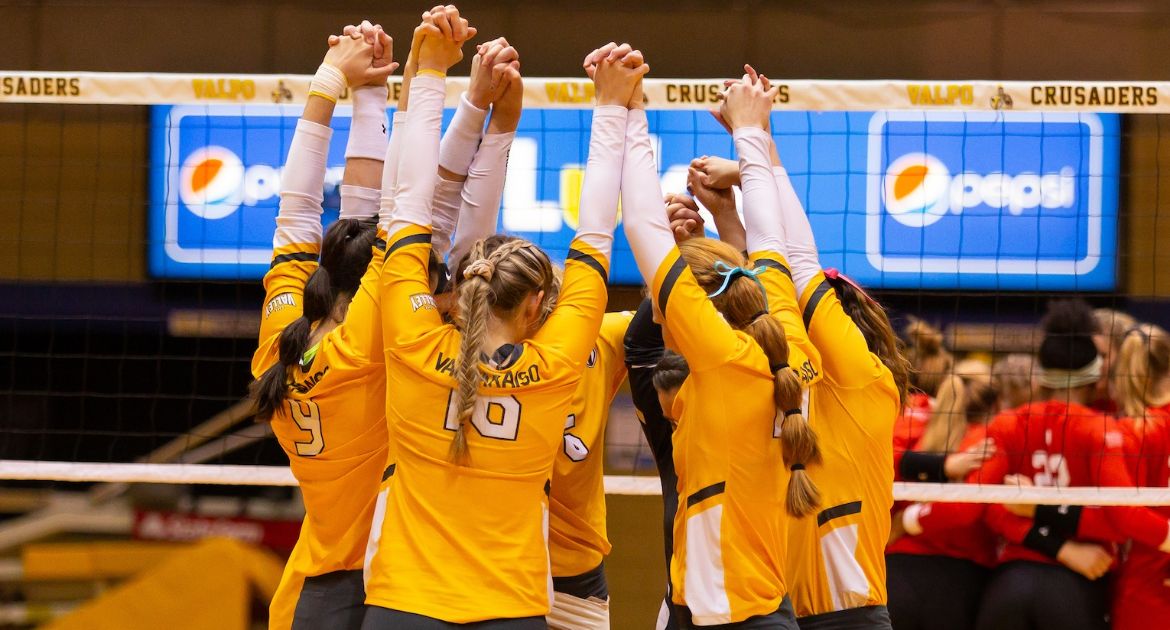 This Week in Valpo Volleyball: The Valparaiso University volleyball team makes its first postseason appearance since 2005 this week, traveling to Oxford, Ohio for the first two rounds of the 2018 National Invitational Volleyball Championship (NIVC). Valpo takes on Ball State Thursday evening in the first round of the tournament, and with a win, would face either host Miami University or Northern Kentucky in the second round on Friday night.

Previously: Valpo split two matches at the 2018 MVC Tournament. The program earned its first-ever MVC Tournament victory on Thanksgiving night, winning in five sets against host Missouri State. Valpo then fell in four sets to top-seeded UNI, which went on to claim the tournament title, on Friday. Allison Ketcham represented Valpo on the All-Tournament Team.

Looking Ahead: The winner of the Miami University pod of the NIVC will face the winner of the Tulane pod (which also includes Arkansas State, Little Rock and Cal Baptist) in the tournament quarterfinals.

Following the Action: All of this week’s matches can be seen live on Miami’s RedHawk All-Access subscription service ($9.95/month; auto-renewing service, so should be canceled following weekend). Direct links for the video broadcasts, as well as live stats, will be available at ValpoAthletics.com.

Head Coach Carin Avery: In her 17th season as head coach at Valparaiso, Carin Avery has won 396 matches (396-177, .691) at the helm of the Crusaders and has led Valpo to three league regular season and tournament titles, as well as three NCAA Tournament appearances. A two-time league Coach of the Year, Avery has coached 55 All-League recipients over her tenure at Valpo. She is Valpo’s all-time leader in both victories and winning percentage, and owns 451 career victories overall as a head coach.

Scouting the Opposition: Ball State - The Cardinals enter the tournament at 22-9 overall and went 12-4 in MAC regular season play, winning the West Division. BSU dropped a five-set decision to Miami in the MAC Tournament semifinals. Ellie Dunn leads the BSU offense with 3.66 kills/set, while setter Amber Seaman hands out 10.32 assists/set and ranks 24th nationally with 0.44 aces/set. Defensively, Meg Starling leads the Cardinals and ranks 40th nationally with 1.26 blocks/set.
Miami - The RedHawks enter the tournament at 22-8 overall and 13-3 in MAC play, tying for the East Division title and the MAC regular season crown. After the win over Ball State in the semifinals, Miami fell in five sets to Eastern Michigan in the championship match. Margaret Payne hits .316 with a team-high 2.56 kills/set and also paces the RedHawks with 1.06 blocks/set.
Northern Kentucky - Valpo’s brief Horizon League rival, the Norse enter the NIVC at 21-9 overall and 11-5 in Horizon League play. NKU tied for second in the league regular season standings and advanced to the HL championship match, where it fell to top-seeded Green Bay in straight sets. Haley Libs leads NKU with 3.92 kills/set and also adds 3.90 digs/set, while libero Ashton Terrill tallies 5.52 digs/sets in the back row.

Outperforming the Preseason Poll: For the second time in as many seasons as an MVC member, Valpo outperformed its preseason pick in the coaches poll. This year, Valpo closed the regular season in fourth position after being picked fifth in the preseason. Last season, Valpo was picked seventh before finishing in a tie for fifth place.

Success Away From Home: The final weekend of the regular season and the MVC Tournament have reflected Valpo’s strong play away from the ARC this season. Playing 23 of its 35 matches away from home, Valpo has posted a 17-6 record - going 11-4 in true road matches and 6-2 on neutral courts.

Spreading the Wealth: With no player among the top-10 in the Valley in kills/set, it has truly been a team effort on the attack this year for Valpo. Four different players are averaging at least two kills/set, with another trio clocking in above 1.5 kills/set. The offensive diversity can be seen in Valpo’s match-by-match leaders in kills, as seven different players have led the Crusaders in kills this season: 21 times by outsides (Ketcham 11, Carlson 9, Bulmahn 1); 7 times by right sides (Cummings 5, Zaleski 2); 6 times by middles (Bronner 3, McCarthy 3).

Just Win, Baby, Win: Valpo enters the NIVC with 25 victories on the season, the 15th time in Avery’s 17 seasons that Valpo has won 20 or more matches. This year’s squad is the eighth for Avery with at least 25 victories. This year also marked the seventh time out of Avery’s 15 20-win teams that the program reached the 20-win mark within the season’s first 25 matches.

RPI Ranks: Valpo sits in strong position in the latest NCAA RPI release. Valpo currently sits at 69th in the RPI and is one of four MVC squads in the top-100, joined by NCAA Tournament teams UNI (16th) and Illinois State (29th), as well as fellow NIVC qualifier Bradley (99th). Valpo has posted a top-100 RPI finish just three times in the tenure of head coach Carin Avery, and not since 2008 (67th). Valpo’s best-ever RPI finish came in 2004, when it clocked in at 55th position.

Outside Tandem: Seniors Katherine Carlson and Allison Ketcham have been the most productive pair of classmates on the outside in program history. They are the only set of classmates to both rank among Valpo’s all-time top-10 in kills (Carlson 6th, Ketcham 7th), and are two of just nine members of Valpo’s 1,000-kill/1,000-dig club. Carlson also ranks sixth in program history in career service aces, while Ketcham is fourth all-time at Valpo in career digs. Carlson ranks 18th among all active D-I players in aces and Ketcham is 20th among active D-I players in digs.

Leading the Back Row: Much like Anderson, sophomore Rylee Cookerly has played every set at libero since coming to Valpo. She currently ranks second among active D-I players in career digs/set with 5.46 digs/set. After tallying 59 digs over Valpo’s two MVC Tournament matches, including a Valpo season-high 30 in the win over Missouri State, Cookerly has picked up 691 digs this season, fourth-most in a single season in program history. With 1,377 career digs through two seasons, Cookerly is already only 18 digs shy of Valpo’s all-time top-10 in the category and is 37 digs ahead of Taylor Root’s total through her first two years - Root went on to set Valpo’s career record in the category and currently ranks fourth in NCAA history in career digs.

Freshmen Step Up: Valpo has had a pair of freshmen put together some strong performances recently as their rookie seasons near an end. Middle Haley Hart ended the final weekend of the regular season with a season high of seven kills, but obliterated that mark twice, going for 15 kills in a win at Missouri State and 14 kills in a win at Southern Illinois. Meanwhile, outside Jillie Grant has become a regular recently serving and playing back row, and tallied a career-best 12 digs to help Valpo to its first-round tournament win over Missouri State.