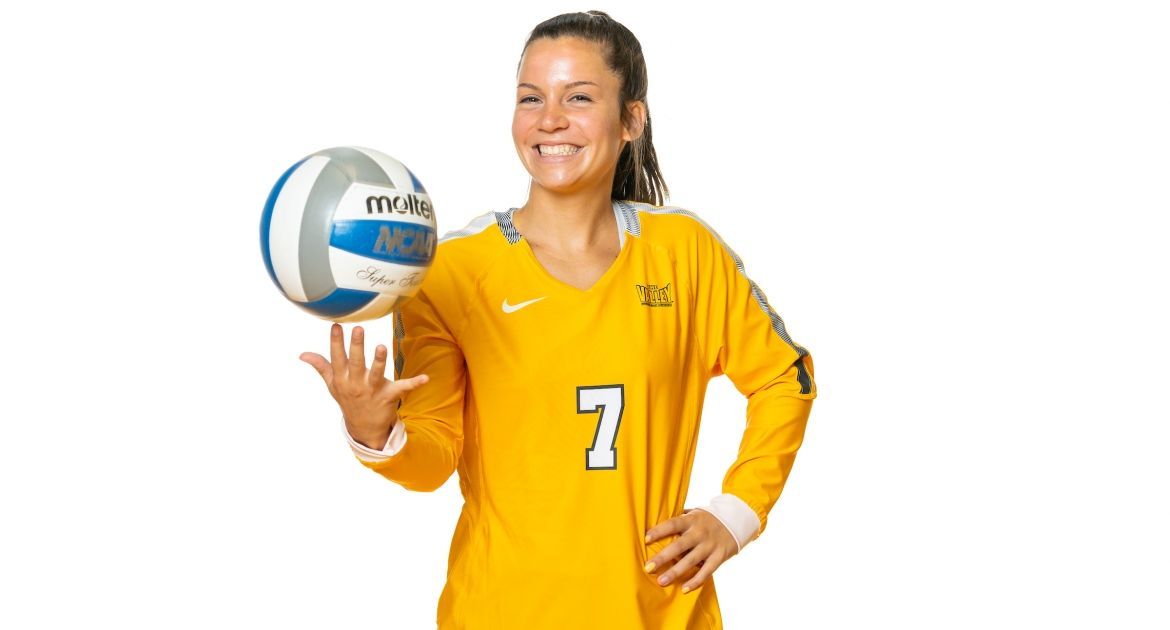 This Week in Valpo Volleyball: The Valpo volleyball team opens up Missouri Valley Conference play this weekend with the longest road trip on the conference slate, heading south to take on Southern Illinois Friday evening before continuing on to Missouri State for a Saturday matchup.

Previously: Valpo closed out pre-conference play with its second tournament championship of the season, claiming the SIUE Cougar Classic crown with sweeps of the hosts and of Western Illinois. Bella Ravotto was named Tournament MVP and Gretchen Kuckkan joined her on the All-Tournament Team.

Looking Ahead: After 13 consecutive matches away from home to open the campaign, the Beacons will finally step on the court at the ARC this season with three matches in a four-day span next weekend, taking on Indiana State on Friday, Evansville on Saturday and Drake on Monday.

Following the Beacons: The match at Missouri State will be broadcast live on ESPN3. Links for the live video, as well as live stats for both matches, are available via ValpoAthletics.com.

Head Coach Carin Avery: In her 20th season as head coach at Valparaiso, Carin Avery has won 432 matches (432-209, .674) at the helm of the program and has led Valpo to three league regular season and tournament titles, as well as three NCAA Tournament appearances. A two-time league Coach of the Year, Avery has coached 55 All-League recipients over her tenure at Valpo. She is Valpo’s all-time leader in both victories and winning percentage, and owns a 487-233 (.676) record overall as a head coach.

Series History: Southern Illinois - Valpo holds a slight 6-5 edge in the all-time series against the Salukis, but is 6-2 versus SIU since joining the MVC. Last season, the two teams split a pair of matches at the ARC, with the Salukis emerging 3-2 victors in the first contest before Valpo claimed a 3-1 win in the second matchup. Haley Hart averaged 3.00 kills/set on .382 hitting over the two matches.

Missouri State ­- The Bears hold an 8-3 advantage in the all-time series and are 6-3 since Valpo joined the MVC. Two of those MSU wins came last season, as the Bears bested Valpo in four and five sets on consecutive days in Springfield.

Scouting the Opposition: Southern Illinois - The Salukis enter the weekend with a 5-8 record and dropped matches last weekend to Central Arkansas, Tulsa and SEMO at the SEMO Redhawks Invitational. Anna Jaworski ranks among the nation’s freshman leaders in assists, averaging 10.68/set, while Katy Kluge ranks in the top-10 in the MVC in both digs and aces.

Missouri State - The Bears own a 9-3 record entering MVC play, taking two of three last weekend at the Jayhawk Classic, beating Albany and Kansas City while falling to Kansas. Amelia Flynn leads the team and ranks fifth in the Valley with 3.26 kills/set, while Azyah Green (1.29 blocks/set) and Teagan Polcovich (4.72 digs/set) both rank second in the MVC in their respective categories.

Digging Deep: Valpo continued its long tradition of strong back row play in the spring 2021 season, finishing the season ranked third nationally and second in the Valley with 20.37 digs/set. Valpo has ranked among the top-30 nationally in digs/set in each of the last 10 seasons, including leading the nation with 20.03 digs/set in 2017 to go along with a fourth-place rank in 2010 and a sixth-place finish in 2015. Since the move to 25-point scoring, only seven teams have averaged more than 20 digs/set over the course of a season, and Valpo is the only program to have done it twice. 2018 saw Valpo lead the nation with 2,613 total digs - a mark which set a program single-season record and a Division I record in the 25-point era. Through four weekends this year, Valpo sits 22nd nationally in digs/set.

Another Trophy For the Collection: The Beacons earned their second tournament championship of the season as they won the SIUE Cougar Classic last weekend with victories over SIUE and Western Illinois, pairing it with the trophy they won earlier this year at Tennessee Tech’s Golden Eagle Invitational. Valpo has now won 27 in-season tournament titles under head coach Carin Avery, and this season marks the 11th time in her tenure the program has claimed multiple in-season tournament championships in the same season.

Balanced Team Effort: Not only did Valpo sweep its pair of matches last weekend, it did so with contributions up and down the roster. 14 different players saw action over the course of the pair of wins, with 13 of those appearing in at least three sets. Eight different players racked up at least 10 attacks on the day, and no player racked up more than 10 kills in either of the matches. Notably, against Western Illinois, Mallory Januski set career highs with seven kills and five blocks, Rachel Speck registered a career-best four blocks and Elise Swistek led Valpo with a career-high eight kills.

Cookerly On the Verge: Fifth-year libero Rylee Cookerly enters this weekend on the verge of yet another myriad of milestones. The two-time MVC Libero of the Year entered this season 16th in NCAA history in career digs, but has already moved up to sixth on the all-time chart with 2,743 career digs.. Cookerly, who ranked 10th in the nation in digs/set last year and currently sits 11th this year, is just nine digs shy of Taylor Root’s Valpo career record (fifth in NCAA history) and 35 digs away from Courtney Pence’s MVC career record (fourth in NCAA history). She is also just 37 digs shy of third and 48 from second on the NCAA all-time chart.

Ravotto Stands Out: Junior outside hitter Bella Ravotto led the balanced team effort in the wins over Western Illinois and SIUE last weekend, and for that was rewarded as MVP of the Cougar Classic. Ravotto notched seven kills, six digs and three blocks in Valpo’s win over WIU, and followed with a team-high 10 kills without an attack error, hitting .417, and six more digs in the sweep of SIUE. Over the two matches, the junior averaged 2.83 kills/set on .340 hitting - committing just one total attack error - and an even 2.00 digs/set. It was the first All-Tournament Team accolade of her career in addition to her first Tournament MVP honor. On the season, Ravotto ranks second on the team with 2.51 kills/set and third with 2.73 digs/set.

Kuckkan Enjoys Clean Weekend: Junior Gretchen Kuckkan has made an immediate impact on the Valpo offense in her first season on campus, and last weekend joined Ravotto as an All-Tournament Team honoree. Kuckkan was clean on the attack over the course of both sweeps, hitting .519 and averaging 2.33 kills/set while not committing a single attack error. She picked up seven kills on 15 swings in the WIU match, and followed with seven more kills on 13 swings against SIUE while also tying for team-high honors with three blocks. For Kuckkan, it was her second career All-Tournament Team honor, as she previously earned All-Tournament accolades as a freshman playing for Indiana State at the Wright State Invitational.