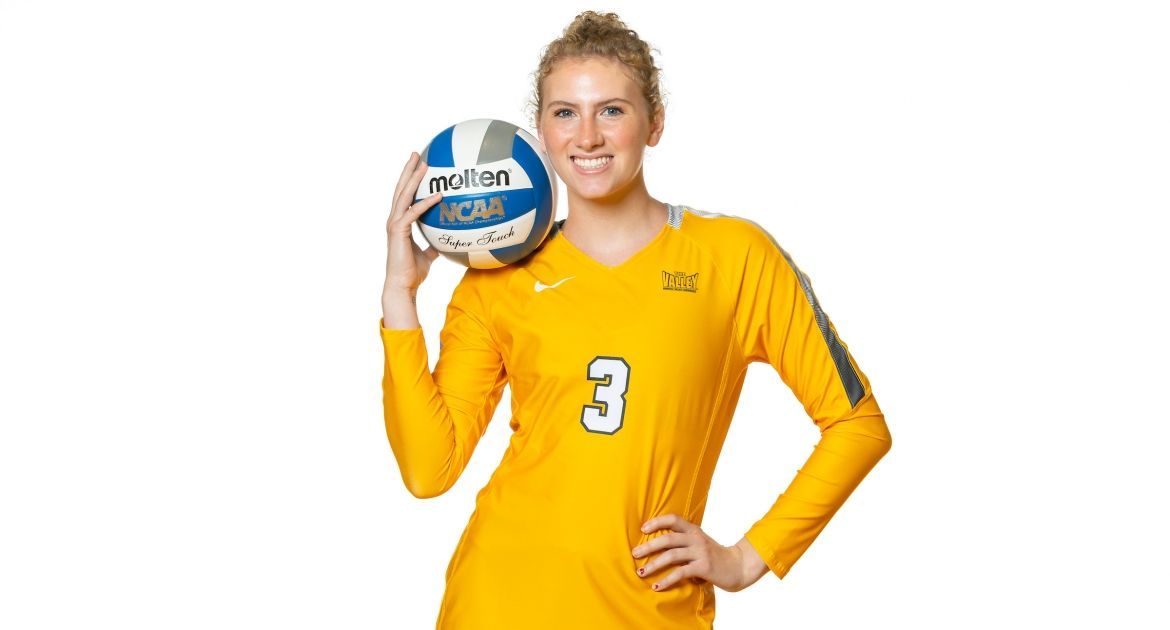 This Week in Valpo Volleyball: Valpo moves past the halfway mark of the MVC schedule this weekend as it returns home to the ARC to host a pair of matches during the campus’ Family Weekend. The Beacons will welcome Missouri State to the ARC Friday evening and Southern Illinois on Saturday evening. The program will be raising money for the Rin Seibert Scholarship both nights.

Previously: Valpo dropped a pair of matches in central Illinois last weekend, falling in four sets at Bradley and in five sets at Illinois State.

Looking Ahead: Valpo hits the road again next weekend with visits to its two in-state foes, facing Evansville Friday night and Indiana State Saturday evening. The three-match weekend concludes at home on Monday, Nov. 1 versus UNI.

Following the Beacons: Friday night’s match with Missouri State will be broadcast live on ESPN+. Links for the live video, as well as live stats for all matches, are available via ValpoAthletics.com.

Head Coach Carin Avery: In her 20th season as head coach at Valparaiso, Carin Avery has won 436 matches (436-213, .672) at the helm of the program and has led Valpo to three league regular season and tournament titles, as well as three NCAA Tournament appearances. A two-time league Coach of the Year, Avery has coached 55 All-League recipients over her tenure at Valpo. She is Valpo’s all-time leader in both victories and winning percentage, and owns a 491-237 (.674) record overall as a head coach.

Series History: Missouri State - The Bears hold an 9-3 advantage in the all-time series and are 7-3 since Valpo joined the MVC. MSU has won the last four in a row, including a four-set victory earlier this season in Springfield. Haley Hart led the Valpo effort in that match with 12 kills and four blocks.

Southern Illinois - Valpo holds a slight 7-5 edge in the all-time series against the Salukis, but is 7-2 versus SIU since joining the MVC. That includes a four-set win in the first meeting between the two squads this season down in Carbondale. Rylee Cookerly broke Valpo’s career digs record in that win, while Hart stood out with 15 kills on .538 hitting and six blocks.

Scouting the Opposition: Missouri State - The Bears enter Friday night’s match at 14-6 overall and 5-3 in MVC play, taking down Southern Illinois in four sets in their lone match last weekend. Maddy Bushnell paces the Valley with a .358 hitting percentage, while Morgan Sprague ranks second in the conference with 10.36 assists/set.

Southern Illinois - The Salukis are 5-16 overall and 0-8 in the Valley, with a Friday night match at Loyola prior to their visit to the ARC. Freshman setter Anna Jaworski ranks third among MVC setters with 10.23 assists/set.

Digging Deep: Valpo continued its long tradition of strong back row play in the spring 2021 season, finishing the season ranked third nationally and second in the Valley with 20.37 digs/set. Valpo has ranked among the top-30 nationally in digs/set in each of the last 10 seasons, including leading the nation with 20.03 digs/set in 2017 to go along with a fourth-place rank in 2010 and a sixth-place finish in 2015. Since the move to 25-point scoring, only seven teams have averaged more than 20 digs/set over the course of a season, and Valpo is the only program to have done it twice. 2018 saw Valpo lead the nation with 2,613 total digs - a mark which set a program single-season record and a Division I record in the 25-point era. Valpo currently sits 20th nationally in digs/set this season with 16.89/set and leads the MVC in the category.

Closing In On a Winning Record: With a 13-6 record, this year’s squad finds itself on the verge of clinching a winning record in 2021, something which has been a standard for this program. With two more wins, Valpo would guarantee finishing above .500, which the program has done in 17 of head coach Carin Avery’s 19 seasons. A 20-win season is within reach as well, something Avery’s teams have accomplished 15 times.

Fifth Set Run Ends: The queens of the fifth set saw their final frame luck finally run out in Saturday’s loss at Illinois State, falling 15-13 in the fifth to the Redbirds. Prior to that loss, Valpo had won its first six five-set matches of the season and had won nine consecutive matches dating back to last year which had gone the distance - ironically, a streak which started with February’s dominant 15-2 fifth-set win at Illinois State. Of this year’s five-set wins, Valpo was down 2-0 in two of those matches - UCSB and South Alabama - before rallying to win, and faced a match point in two of those matches - Tennessee Tech and South Alabama - as well.

Cookerly Continues to Dig: Fifth-year libero Rylee Cookerly has checked numerous milestones off her lists of things to chase this season. First, she broke Valpo’s career digs record, previously held by Taylor Root, on Sept. 24 at Southern Illinois. One week later, on Oct. 1 against Indiana State, Cookerly surpassed former Illinois State standout Courtney Pence as the MVC’s career digs record holder. Finally, the next night against Evansville, Cookerly moved past Minnesota’s Paula Gentil for second place in NCAA history in career digs. The two-time MVC Libero of the Year next has her sights on the 3,000 career dig milestone, a mark which she enters this weekend 117 digs shy of. The ultimate goal would be making a run at the NCAA all-time record of 3,176, held by Chattanooga’s Lara Newberry.

McCarthy Leads the Way: Fifth-year middle Peyton McCarthy has been in double figures in kills in five straight matches, most recently posting 10 kills on .269 hitting at Bradley and tying for team-high honors with 14 kills at Illinois State. McCarthy has now led Valpo in kills in four of the team’s last five matches.Her first kill against Drake on Oct. 4 was the 1,000th of her career, and she now ranks 16th in program history with 1,049 career kills, just 28 away from 15th position. Also strong on the block, McCarthy is averaging 0.86 blocks/set this year and continues to move up among Valpo’s all-time leaders in that category as well. She picked up eight blocks over last weekend’s pair of matches and now owns 394 career blocks, sixth-best in program history and just 10 outside the top-five.

Hart Out to Strong MVC Start: Senior middle Haley Hart has posted some of her best performances in a Valpo uniform over the first half of MVC play. She is currently hitting .304 with 2.94 kills and 1.09 blocks per set over Valpo’s first eight MVC matches, and was honored as the MVC Player of the Week on Oct. 4 for her performances against Indiana State (match-high 15 kills on .500 hitting, four blocks) and Evansville (16 kills - tying career best - on 355 hitting, four blocks). Most recently, Hart tied for team-high honors with 14 kills and was one off her career best with seven blocks at Illinois State. Hart currently ranks among the conference’s top-10 this season in both hitting percentage (.293, 6th) and blocks/set (0.97, 7th), while her .256 career hitting percentage is tied for sixth in program history.

Anderson Moves On Up: Fifth-year setter Brittany Anderson is also making her mark among the Valley’s all-time best. With 4,257 career assists, Anderson is third in Valpo history and moved into the top-20 in MVC history in the category last weekend. She is also moving up Valpo’s all-time digs leaders as well, as she has pushed her career digs total to 1,165 entering play this weekend - 18th-most in program history.

Boyer Enjoys Strong Weekend: Junior right side Maddy Boyer entered last weekend with just two career matches of 10 or more kills to her credit in her time at Valpo, but doubled that total with a pair of strong efforts. Boyer notched a team-high 11 kills on .304 hitting - the first time in her career she has paced the Beacons in kills - at Bradley, and followed with 10 kills the next evening at Illinois State. She is averaging 2.03 kills/set in MVC play, third on the team behind Valpo’s two middles.