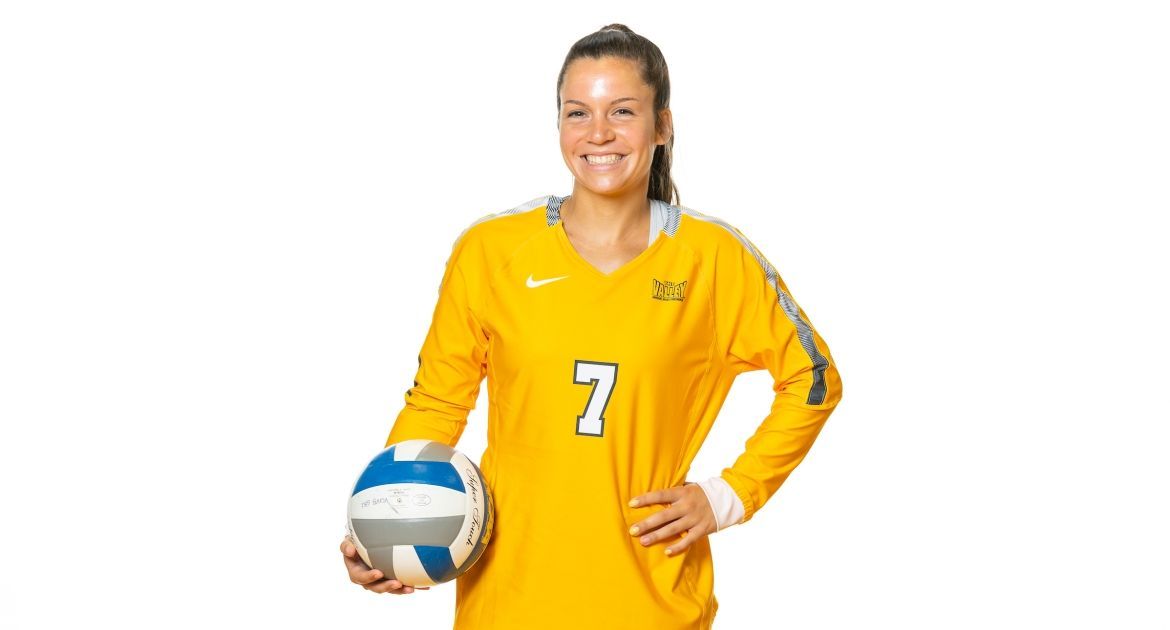 This Week in Valpo Volleyball: The Valpo volleyball team heads to the MVC Championship after finishing in a tie for third place in the final regular season standings. The Beacons will be the fourth seed for the tournament and will open play Thanksgiving afternoon against fifth-seeded Evansville, needing three victories to claim the title.

Previously: Valpo closed the regular season with a strong weekend of play in Iowa, taking down both UNI and Drake in four sets apiece to finish in a tie for third place. Haley Hart and Maddy Boyer stood out, as each combined for 15 blocks over the two victories.

Looking Ahead: The winner of the tournament earns the MVC's automatic bid to the 2021 NCAA Tournament. The NIVC is also a potential postseason landing spot for Valley teams.

Following the Beacons: Every tournament match will be broadcast live on ESPN+. Links for the live video, as well as live stats for all matches, are available via ValpoAthletics.com.

Head Coach Carin Avery: In her 20th season as head coach at Valparaiso, Carin Avery has won 444 matches (444-215, .674) at the helm of the program and has led Valpo to three league regular season and tournament titles, as well as three NCAA Tournament appearances. A two-time league Coach of the Year, Avery has coached 55 All-League recipients over her tenure at Valpo, which has spanned three different conferences. She is Valpo’s all-time leader in both victories and winning percentage, and owns a 499-239 (.676) record overall as a head coach.

Valpo In the Postseason: In 15 of head coach Carin Avery’s 18 seasons (not counting last season’s tournament withdrawal), Valpo has advanced to at least its conference tournament semifinal match. Valpo is 2-3 as an MVC member in the conference tournament and has advanced to the semifinals in each of the last two tournaments it has participated in. In 10 years in the Horizon League, Valpo was 11-10 in the HL Tournament and advanced to the semifinals nine times - including four berths in the title match. Prior to that, Valpo went 7-2 in its final five years in the Mid-Continent Conference in the Mid-Con Tournament, winning three tournament titles.

Looking to Go 3-0: Valpo’s matchup with Evansville is an opportunity for the Beacons to go 3-0 against the Purple Aces this season, as Valpo claimed 3-1 victories in both regular season matchups. While the old adage says it’s tough to beat the same team three times in one season, that hasn’t been the case for Valpo under Coach Avery. The program has had 10 matchups in conference tournament play in her tenure against teams it beat twice in the regular season, and Valpo posted a 9-1 record in the third matchups — including a perfect 3-0 record when Valpo was the fourth seed facing the fifth seed in a first-round meeting.

Clinching the Best Finish: The Beacons’ win at Drake on Saturday secured the program’s best finish since joining the MVC, as Valpo finished in a tie with Bradley for third place at 12-6. Valpo’s 12-6 record is also its best record in conference play since joining the MVC. After opening conference play 4-4 through the first eight matches, the Beacons closed the MVC slate with an 8-2 record over its last 10 matches.

Look at the RPI: Valpo came in at #50 in the NCAA’s initial release of the 2021 volleyball RPI on Oct. 4, and the Beacons have maintained a spot in the top-100 ever since. In the most recent RPI release on Nov. 22, Valpo checked in at #70 — tops among all MVC programs.

Standards Maintained: Posting winning records and winning 20 matches in a season have been standards for the Valpo volleyball program under Coach Avery, and this year’s team has maintained those standards. The Beacons secured a winning season with their Oct. 23 win against Southern Illinois, the program’s 18th winning season in Avery’s 20 seasons at the helm. Last Friday’s win at UNI was Valpo’s 20th of the season, the 16th time in the last 20 years the program has won at least 20 matches.

Digging Deep: Valpo continued its long tradition of strong back row play in the spring 2021 season, finishing the season ranked third nationally and second in the Valley with 20.37 digs/set. Valpo has ranked among the top-30 nationally in digs/set in each of the last 10 seasons, including leading the nation with 20.03 digs/set in 2017 to go along with a fourth-place rank in 2010 and a sixth-place finish in 2015. Since the move to 25-point scoring, only seven teams have averaged more than 20 digs/set over the course of a season, and Valpo is the only program to have done it twice. 2018 saw Valpo lead the nation with 2,613 total digs - a mark which set a program single-season record and a Division I record in the 25-point era. Valpo currently sits 26th nationally in digs/set with an MVC-best 16.79 digs/set.

Winning With Defense: Valpo had a number of standout performances defensively as it passed the 20-win mark and secured a tie for third place in the final weekend of regular season play. Haley Hart was named the MVC Defensive Player of the Week, but it could have easily gone to Maddy Boyer as well, as both players combined for 15 blocks over the two matches. Both Boyer and Hart recorded six blocks in the win at UNI, and then each set career highs with nine blocks in the win at Drake — tied for the fourth-most blocks in a four-set match by a Valpo player in the 25-point era. As a team, Valpo recorded 15 blocks in the victory over the Bulldogs — a season high and the program’s most in a four-set match since September 2017. Meanwhile, Elise Swistek was named MVC Freshman of the Week as she posted a pair of double-doubles, highlighted by a season-high 27 digs at Drake.

Chasing .300: Only four players in program history have posted a hitting percentage of .300 or better for a full season, and only two of those efforts have come in the rally-scoring era. But both of Valpo’s middles this year are currently on pace to challenge that mark. Haley Hart has boosted her hitting percentage to .306 this year, which would rank fourth in a season in program history, while Peyton McCarthy comes in just under the .300 mark at .292.

Cookerly Continues to Dig: Fifth-year libero Rylee Cookerly has checked numerous milestones off her lists of things to chase this season. First, she broke Valpo’s career digs record, previously held by Taylor Root, on Sept. 24 at Southern Illinois. One week later, on Oct. 1 against Indiana State, Cookerly surpassed former Illinois State standout Courtney Pence as the MVC’s career digs record holder. Finally, the next night against Evansville, Cookerly moved past Minnesota’s Paula Gentil for second place in NCAA history in career digs. Most recently, the two-time MVC Libero of the Year reached the 3,000-career dig milestone on Senior Night in the win over Bradley. Cookerly currently ranks 39th nationally with an MVC-best 4.83 digs/set and sits at 3,055 career digs entering the tournament.

McCarthy Stands Out: Fifth-year middle Peyton McCarthy has had a standout season on both sides of the ball for Valpo this year. Offensively, she is swinging at a .292 clip – seventh in the MVC - with a team-high 2.62 kills/set and has improved her career hitting percentage to .252, among the top-10 in program history. Her career total of 1,147 kills ranks 11th in program history and is just 17 away from the top-10. Meanwhile, on the block, McCarthy ranks 10th in the Valley with 0.96 blocks/set. With 437 career blocks, McCarthy is just six away from second place in program history.

Hart Racks Up the Points: Whether it’s been on the attack or on the block, senior middle Haley Hart has been prolific at ending rallies this season for Valpo. After entering this year having led Valpo in kills just five times over her first three seasons, Hart has paced Valpo in kills nine times and has been in double figures in the category 16 times. She also finds herself leading the Beacons with over a block per set. Hart especially stood out within MVC-only play, as she hit .316 with 3.00 kills/set and 1.09 blocks/set – all team-high marks. She was the only player within Valley play to rank among the top-10 in the conference in both kills and blocks.

Moving On Up: Fifth-year setter Brittany Anderson tallied 41 assists over last week's pair of matches, pushing her career total to 4,478 helpers. With one of her final assists against Drake, Anderson — who ranks third in program history in the category — ascended into 14th place in MVC history in career assists. She also ranks 17th in program history with 1,233 career digs.