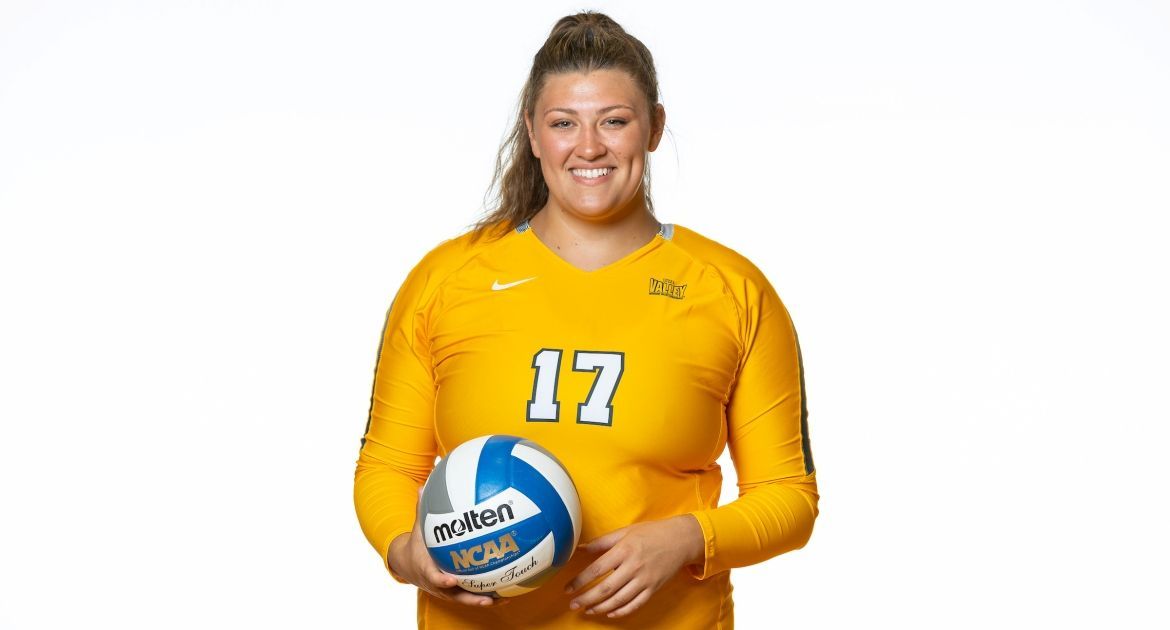 This Week in Valpo Volleyball: The Valpo volleyball team heads to postseason play for the eighth time in program history and hosts postseason tournament action for the first time at the ARC this week as it welcomes Toledo, Indiana State and Butler to town for the first and second rounds of the 2021 National Invitational Volleyball Championship (NIVC). The Beacons start their tournament play against Butler on Thursday evening at 7 p.m.

Previously: Valpo posted a 1-1 record at the 2021 MVC Tournament and advanced to the tournament semifinals for their third consecutive participation, beating Evansville in four sets before falling to top-seeded Loyola in a five-set battle.

Looking Ahead: The winner of the Valpo pod of the tournament will face the winner of the Chicago State pod - which features Evansville, Sam Houston and Bradley in addition to the host Cougars - in the quarterfinals of the NIVC.

Following the Beacons: All three matches over the course of Thursday and Friday will be broadcast live on ESPN+. Links for the live video, as well as live stats for all matches, are available via ValpoAthletics.com.

Head Coach Carin Avery: In her 20th season as head coach at Valparaiso, Carin Avery has won 445 matches (445-216, .673) at the helm of the program and has led Valpo to three league regular season and tournament titles. The program has made five postseason appearances under Avery, including three NCAA Tournament appearances. A two-time league Coach of the Year, Avery has coached 55 All-League recipients over her tenure at Valpo, which has spanned three different conferences. She is Valpo’s all-time leader in both victories and winning percentage, and owns a 500-240 (.676) record overall as a head coach.

Series History: Butler - A longtime rival of the Valpo program, the Bulldogs hold a 27-10 advantage in the all-time series, but Valpo owns the 8-6 edge since Carin Avery took over as head coach. The two teams split 12 matchups in their time together in the Horizon League, the most notable a Butler victory in the 2010 Horizon League Tournament title match. The last meeting came in neutral-site action early in the spring season, a matchup which saw Valpo claim a 3-0 win as it held the Bulldogs to .038 hitting.

Toledo - A series which dates back to 1982, Valpo holds an 8-5 edge all-time over the Rockets. Valpo has won all four meetings under Coach Avery, including a thrilling five-set win earlier this year at Toledo’s Blue & Gold Tournament. Jillie Grant led four Valpo players in double figures in kills in that match with 22 kills on .340 hitting, while Rylee Cookerly notched 30 digs.

Indiana State - While Valpo and ISU are an even 16-16 in the all-time series, Valpo enjoys an 11-6 advantage since Coach Avery took over in 2002 and has won six of 10 matchups since joining the Valley. The two squads split the season series this year, each winning on its respective home floor – Valpo in straight sets and the Sycamores in four. Haley Hart hit .333 with 3.71 kills/set over the two contests, while Peyton McCarthy averaged 1.71 blocks/set.

Scouting the Opposition: Butler – The Bulldogs ended the regular season with a 16-15 overall record and went 10-8 in Big East play, good for a fifth-place finish in the conference standings. They come into postseason play with an RPI of 161. Three Bulldogs earned All-Big East recognition, highlighted by the selection of Jaymeson Kinley — who averages 5.41 digs/set — as the conference’s Libero of the Year.

Toledo - Toledo comes into postseason competition with a 19-12 record and a 10-8 mark in the MAC, tying for third in the West division. The Rockets’ RPI entering the tournament is 150. Three Rockets received All-MAC honors, including First Team recognition for Taylor Alt, who is averaging 4.06 kills/set.

Indiana State - Indiana State owns an 18-12 overall mark and went 9-9 in MVC play to tie for fifth place. The Sycamores’ RPI sits at 126. Melina Tedrow ranks third in the Valley with 4.58 digs/set, while the Sycamores boast two of the top four servers in the MVC – Chloe Mason (0.39 aces/set; 2nd) and Madeline Williams (0.33 aces/set; 4th).

Defending the Home Court: Not only does Valpo get the chance to play at home in postseason tournament play for the first time in program history, it does so on a court on which it has been nearly perfect this season. Valpo closed the 2021 regular season with an 8-1 record at home, its lone loss coming in four sets to MVC tournament champion Illinois State. It marked Valpo’s best home record since posting a 10-1 mark at the ARC in 2009.

500 Times a Winner: Head coach Carin Avery reached a coaching milestone with the quarterfinal win over Evansville last week, as that was the 500th win of her collegiate coaching career. 445 of Avery's victories have come at the helm of the Valpo volleyball program. Avery became one of just 32 active Division I head coaches with at least 500 wins.

Clinching the Best Finish: The Beacons’ win at Drake on the final day of the regular season secured the program’s best finish since joining the MVC, as Valpo finished in a tie with Bradley for third place at 12-6. Valpo’s 12-6 record is also its best record in conference play since joining the MVC. After opening conference play 4-4 through the first eight matches, the Beacons closed the MVC slate with an 8-2 record over its last 10 matches.

Look at the RPI: Valpo came in at #50 in the NCAA’s initial release of the 2021 volleyball RPI on Oct. 4, and the Beacons have maintained a spot in the top-100 ever since. In the most recent RPI release on Nov. 22, Valpo checked in at #65 — tops among all MVC programs.

Standards Maintained: Posting winning records and winning 20 matches in a season have been standards for the Valpo volleyball program under Coach Avery, and this year’s team has maintained those standards. The Beacons secured a winning season with their Oct. 23 win against Southern Illinois, the program’s 18th winning season in Avery’s 20 seasons at the helm. Last Friday’s win at UNI was Valpo’s 20th of the season, the 16th time in the last 20 years the program has won at least 20 matches.

Digging Deep: Valpo continued its long tradition of strong back row play in the spring 2021 season, finishing the season ranked third nationally and second in the Valley with 20.37 digs/set. Valpo has ranked among the top-30 nationally in digs/set in each of the last 10 seasons, including leading the nation with 20.03 digs/set in 2017 to go along with a fourth-place rank in 2010 and a sixth-place finish in 2015. Since the move to 25-point scoring, only seven teams have averaged more than 20 digs/set over the course of a season, and Valpo is the only program to have done it twice. 2018 saw Valpo lead the nation with 2,613 total digs - a mark which set a program single-season record and a Division I record in the 25-point era. Valpo currently sits 23rd nationally in digs/set with an MVC-best 16.92 digs/set.

Spreading the Ball Around: For the most part this season, Valpo’s middles have carried the majority of the load on the attack, as Peyton McCarthy and Haley Hart have combined to lead Valpo in kills 20 times and tallied 10+ kills on 34 combined occasions. But last weekend at the MVC Tournament, the Beacons had a real balance to their attack. In the win over Evansville, McCarthy did lead the way with 14 kills, but she was backed up by 10 kills from Bella Ravotto, nine by Kara Cooper and eight from Hart.

Then, in the tight loss to Loyola, the Valpo attack took it to another level. Five different players reached double digits in kills, including all four pin hitters: Maddy Boyer (15), Cooper (12), Ravotto (11), McCarthy (10) and Elise Swistek (10). Valpo had previously had four players in double figures in kills in a match just four times this season, but all four of those occasions included both middles. The last time Valpo placed five players in double figures in kills was on Oct. 4, 2019 at Evansville, while it’s unknown if the program has ever had four different pin hitters all reach double digits in the same match.

Cookerly Continues to Dig: Fifth-year libero Rylee Cookerly has checked numerous milestones off her lists of things to chase this season. First, she broke Valpo’s career digs record, previously held by Taylor Root, on Sept. 24 at Southern Illinois. One week later, on Oct. 1 against Indiana State, Cookerly surpassed former Illinois State standout Courtney Pence as the MVC’s career digs record holder. Finally, the next night against Evansville, Cookerly moved past Minnesota’s Paula Gentil for second place in NCAA Division I history in career digs. Most recently, the two-time MVC Libero of the Year reached the 3,000-career dig milestone on Senior Night in the win over Bradley. Cookerly currently ranks 33rd nationally with an MVC-best 4.88 digs/set and sits at 3,105 career digs entering the tournament, just 71 digs shy of the all-time D-I record of 3,176.

Hart Racks Up the Points: Whether it’s been on the attack or on the block, senior middle Haley Hart has been prolific at ending rallies this season for Valpo. After entering this year having led Valpo in kills just five times over her first three seasons, Hart has paced Valpo in kills nine times and has been in double figures in the category 16 times. She also finds herself leading the Beacons with over a block per set. Hart especially stood out within MVC-only play, as she hit .316 with 3.00 kills/set and 1.09 blocks/set – all team-high marks. She was the only player within Valley play to rank among the top-10 in the conference in both kills and blocks.

Moving On Up: Fifth-year setter Brittany Anderson tallied 47 assists over Valpo’s two matches at the MVC Tournament, pushing her career total to 4,525 assists. With one of her final assists in the regular season at Drake, Anderson — who ranks third in program history in the category — ascended into 14th place in MVC history in career assists. She also ranks 17th in program history with 1,252 career digs, just 13 shy of the top-15.