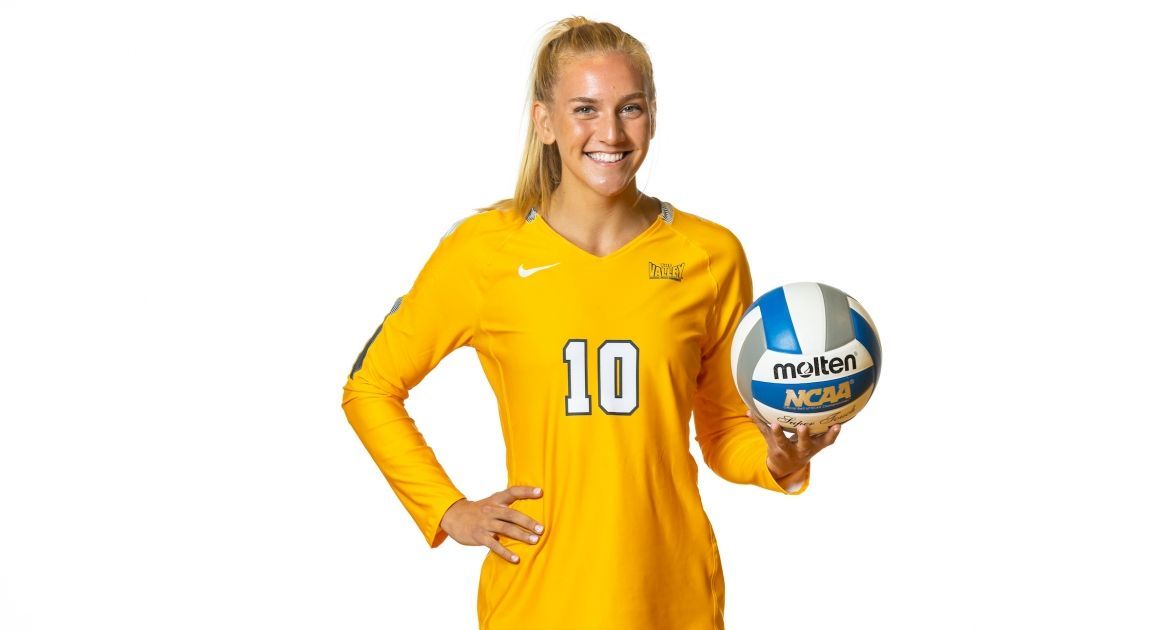 This Week in Valpo Volleyball: The Valpo volleyball team looks to continue its run in the 2021 National Invitational Volleyball Championship on Monday night, as the Beacons host a quarterfinal match at the ARC against fellow MVC program Evansville for a spot in the tournament semifinals.

Previously: Valpo swept its way through the first two rounds of this year's NIVC, taking down longtime rival Butler in straight sets on Thursday evening in the first round before earning its second win of the season over Toledo on Friday night.

Looking Ahead: On Valpo's side of the NIVC bracket, North Florida is through to the quarterfinals, while UConn and Boston College will play on Sunday for the other quarterfinal berth.

Following the Beacons: Monday's match against the Purple Aces will be broadcast live on ESPN+. Links for the live video, as well as live stats for all matches, are available via ValpoAthletics.com.

Head Coach Carin Avery: In her 20th season as head coach at Valparaiso, Carin Avery has won 447 matches (447-216, .674) at the helm of the program and has led Valpo to three league regular season and tournament titles. The program has made five postseason appearances under Avery, including three NCAA Tournament appearances. A two-time league Coach of the Year, Avery has coached 55 All-League recipients over her tenure at Valpo, which has spanned three different conferences. She is Valpo’s all-time leader in both victories and winning percentage, and owns a 502-240 (.677) record overall as a head coach.

Series History: It's a familiar foe for Valpo in the quarterfinals, as this will mark the fourth meeting of the season with Evansville. The Beacons hold a 14-12 advantage in the all-time series with the Purple Aces, but have dominated under Coach Avery, winning 12 of 14 meetings - including all three so far this year. Peyton McCarthy hit .412 with 3.83 kills/set over the three victories this year, while Haley Hart hit .325 with 3.25 kills/set and 1.17 blocks/set.

Scouting the Opposition: The Purple Aces enter Monday's quarterfinal match with a 21-11 overall and finished 9-9 in MVC regular season play. In the first two rounds of the NIVC, Evansville swept Sam Houston before defeating Bradley in four sets. The Purple Aces boast the top two players in the Valley in kills/set in First Team All-MVC honoree Alondra Vazquez (4.25 kills/set) and MVC Freshman of the Year Giulia Cardona (4.00 kills/set).

A Sweep-y Start: Valpo made quick work of both of its first two opponents in this year's NIVC, taking care of both Butler and Toledo in the minimum three sets. Each of Valpo's last three postseason victories have come via the sweep. The back-to-back sweeps came after the Beacons had entered the tournament with just one sweep victory in their last 10 matches.

Four Of a Kind?: Valpo has the chance to achieve a program first when it takes on Evansville on Monday, as with a victory, the Beacons will have beaten the Aces for the fourth time this season. Valpo's win over Evansville at the MVC Tournament improved the program's record under Coach Avery to 10-1 when facing a team for the third time it had beaten twice during the regular season.

Back to December: This year's NIVC run is Valpo’s fifth venture to playing in the month of December. Valpo previously played in December in the three NCAA Tournament appearances from 2003 through 2005, as well as the 2018 NIVC. The latest Valpo has ever played a match (excepting last season's COVID schedule shift) came on Dec. 6, 2018 in the NIVC quarterfinal at Tulane, meaning that Monday's match will be tied for the latest in the calendar in program history.

Defending the Home Court: Valpo has taken full advantage of getting the opportunity to play at home in postseason tournament play for the first time in program history. With the wins over Butler and Toledo to start off the NIVC, the Beacons now own a 10-1 record at the ARC this year - their lone loss coming in four sets to MVC tournament champion Illinois State. It ties the 2009 squad, which also went 10-1 at home, for the program's best home record since the 2005 NCAA Tournament team went 13-0 at the ARC.

500 Times a Winner: Head coach Carin Avery reached a coaching milestone with the quarterfinal win over Evansville in the MVC Tournament, as that was the 500th win of her collegiate coaching career. Avery now owns 502 career wins, 447 of which have come at the helm of the Valpo volleyball program. Avery is of just 32 active Division I head coaches with at least 500 collegiate wins.

Clinching the Best Finish: The Beacons’ win at Drake on the final day of the regular season secured the program’s best finish since joining the MVC, as Valpo finished in a tie with Bradley for third place at 12-6. Valpo’s 12-6 record is also its best record in conference play since joining the MVC. After opening conference play 4-4 through the first eight matches, the Beacons closed the MVC slate with an 8-2 record over its last 10 matches.

Look at the RPI: Valpo came in at #50 in the NCAA’s initial release of the 2021 volleyball RPI on Oct. 4, and the Beacons have maintained a spot in the top-100 ever since. In the most recent RPI release on Nov. 28, Valpo checked in at #65 — tops among all MVC programs.

Standards Maintained: Posting winning records and winning 20 matches in a season have been standards for the Valpo volleyball program under Coach Avery, and this year’s team has maintained those standards. The Beacons secured a winning season with their Oct. 23 win against Southern Illinois, the program’s 18th winning season in Avery’s 20 seasons at the helm. The win at UNI on the final weekend of the regular season was Valpo’s 20th of the year, the 16th time in the last 20 years the program has won at least 20 matches.

Digging Deep: Valpo continued its long tradition of strong back row play in the spring 2021 season, finishing the season ranked third nationally and second in the Valley with 20.37 digs/set. Valpo has ranked among the top-30 nationally in digs/set in each of the last 10 seasons, including leading the nation with 20.03 digs/set in 2017 to go along with a fourth-place rank in 2010 and a sixth-place finish in 2015. Since the move to 25-point scoring, only seven teams have averaged more than 20 digs/set over the course of a season, and Valpo is the only program to have done it twice. 2018 saw Valpo lead the nation with 2,613 total digs - a mark which set a program single-season record and a Division I record in the 25-point era. Valpo currently sits 18th nationally in digs/set with an MVC-best 17.03 digs/set.

Spreading the Ball Around: Over Valpo's two MVC Tournament matches and two NIVC matches to date, setters Brittany Anderson and Victoria Bulmahn have done a great job spreading the ball around to Valpo's six attackers offensively. Over the four matches, all six attackers are averaging at least five swings per set, while none are averaging more than 8.3 swings/set (Bella Ravotto).

Cookerly Continues to Dig: Fifth-year libero Rylee Cookerly has checked numerous milestones off her lists of things to chase this season. First, she broke Valpo’s career digs record, previously held by Taylor Root, on Sept. 24 at Southern Illinois. One week later, on Oct. 1 against Indiana State, Cookerly surpassed former Illinois State standout Courtney Pence as the MVC’s career digs record holder. Finally, the next night against Evansville, Cookerly moved past Minnesota’s Paula Gentil for second place in NCAA Division I history in career digs. Most recently, the two-time MVC Libero of the Year reached the 3,000-career dig milestone on Senior Night in the win over Bradley. Cookerly currently ranks 29th nationally with an MVC-best 4.92 digs/set and tallied 34 digs in the first two NIVC matches, leaving her at 3,139 career digs entering Monday's match, just 37 digs shy of the all-time D-I record of 3,176. Last time out, she surpassed the 600-dig mark for this season, making her the first player in program history with four seasons of 600+ digs.

McCarthy Among the Best: Fifth-year middle Peyton McCarthy has had a standout season on both sides of the ball for Valpo this year to cap a stellar career. Offensively, she is swinging at a .289 clip – fifth in the MVC – with a team-high 2.62 kills/set and has improved her career hitting percentage to .253, among the top-10 in program history. McCarthy, who has reached double figures in kills in seven straight matches, has 1,191 career kills, good for 10th in program history and just a few away from moving up to eighth. Meanwhile, on the block, McCarthy ranks 10th in the Valley with 0.94 blocks/set. With 449 career blocks, McCarthy now ranks second in program history in that category as well. She is one of just three players in program history to hold spots in the top-10 in both career kills and blocks.

Hart Racks Up the Points: Whether it’s been on the attack or on the block, senior middle Haley Hart has been prolific at ending rallies this season for Valpo. After entering this year having led Valpo in kills just five times over her first three seasons, Hart has paced Valpo in kills 10 times and has been in double figures in the category 17 times. She also finds herself leading the Beacons with over a block per set. Hart especially stood out within MVC-only play, as she hit .316 with 3.00 kills/set and 1.09 blocks/set – all team-high marks. She was the only player within Valley play to rank among the top-10 in the conference in both kills and blocks.

Moving On Up: Fifth-year setter Brittany Anderson tallied 37 assists over Valpo’s wins in the first two rounds of the NIVC, pushing her career total to 4,562 assists. With one of her last assists in the regular season finale at Drake, Anderson — who ranks third in program history in the category — ascended into 14th place in MVC history in career assists. Last time out, she also cracked Valpo's all-time top-15 in career digs, as she now has 1,267 career digs.