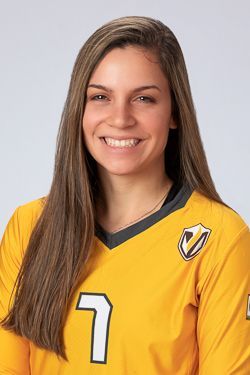 2019: Started all 34 matches at libero and appeared in all 127 sets ... Missouri Valley Conference Libero of the Year and a First Team All-MVC honoree ... earned AVCA Honorable Mention All-Region accolades as well ... tallied 667 digs, good for ninth nationally ... dig total ranks ninth in Valpo's single-season record book and 14th in the MVC's annals ... finished year third in the Valley and 19th nationally with an average of 5.25 digs/set ... bumped average up to 5.66 digs/set within conference play ... ended junior year with 2,092 career digs, good for 12th nationally among active players at that point ... was the only junior among the top-25 active players and owned 299 more digs than the second-highest junior ... sits fourth in program history in career digs through three years and is the first player to have reached the 2,000-dig milestone in just three seasons ... is just the third player in MVC history to tally at least 600 digs in each of her first three years and already ranks among the top-10 in MVC history in career digs as well ... posted 10 or more digs in all 34 matches, leading Valpo on 32 occasions ... recorded at least 20 digs 15 times and surpassed the 30-dig mark three times ... also paced Valpo from the service line, totaling 29 service aces ... ranked third on the team with 119 assists as well and posted a team-best serve reception percentage of .966 ... committed just 10 serve reception errors in MVC play ... earned All-Tournament Team honors at the Hampton Inn Invitational Aug. 30-31 to open the season, registering 50 digs and 10 assists over the three matches ... posted 25 digs against Central Michigan Sept. 14 ... tallied 25 digs at Evansville Oct. 4 ... set season high with 36 digs against Drake Oct. 28, tied for fifth-most in a five-set match in program history ... matched career high with eight assists to go with 17 digs in sweep of Evansville Nov. 2 ... named MVC Defensive Player of the Week Nov. 4 after averaging 6.27 digs/set over three matches the previous week and not committing a serve reception error ... totaled at least 23 digs in five consecutive matches Nov. 8-22 ... recorded 33 digs at Missouri State Nov. 9 ... helped Valpo to come-from-behind five-set win at Drake Nov. 22 with 26 digs ... posted 33 digs as Valpo earned five-set quarterfinal win at MVC Tournament over Bradley Nov. 28, tied for eighth-most in a single match in MVC Tournament history ... earned All-Tournament Team accolades at the MVC Tournament as she averaged 5.67 digs/set over the two contests ... also strong in the classroom, was named a CoSIDA First Team Academic All-District recipient and received MVC Scholar-Athlete First Team honors as well.

2018: Started all 38 matches at libero and appeared in all 146 sets ... finished the year with 739 digs, third-most in a single season in program history and third-most in the NCAA ... average of 5.06 digs/set ranked fourth in the MVC and 45th nationally ... moved up to third in MVC-only play in digs, averaging 5.29/set ... led the way as Valpo set a new NCAA D-I 25-point rally scoring record with 2,613 total digs ... moved into 10th place in program history in career digs after just two seasons (1,425) ... led Valpo in digs on 31 occasions ... reached double figures in digs 36 times, including 16 efforts of at least 20 digs ... also handed out 137 assists and tallied 26 service aces, both of which ranked second on the team ... posted serve reception percentage of .967 on the year and improved the mark to .976 in MVC play, committing just nine serve reception errors in conference action ... handed out a career-high eight assists twice on the year: Aug. 24 against Saint Francis and Nov. 23 in the MVC semifinals against UNI ... named to All-Tournament Team at Air Force for her efforts Sept. 7-8 ... had stretch of three straight matches with at least 20 digs Sept. 15-21, including a 27-dig effort in Sept. 18 win at Purdue Fort Wayne ... surpassed the 1,000-dig milestone for her career as part of a 18-dig performance in Sept. 28 sweep of Drake ... was perfect on serve reception over seven consecutive matches Oct. 12-29, handling 132 serves over that stretch without an error ... reached 20+ digs in six of eight matches Oct. 29-Nov. 23 ... racked up 27 digs against Missouri State Oct. 29 ... posted 29 digs in regular season finale at Southern Illinois Nov. 17 ... registered a season-high 30 digs in first-round MVC Tournament win over Missouri State Nov. 22 ... followed the next day with 29 digs in semifinal action against UNI ... a Second Team CoSIDA Academic All-District honoree and a First Team MVC Scholar-Athlete selection.

2017: Honored as Midwest Region Freshman of the Year by the AVCA - one of just 10 freshmen in the nation to earn the regional Freshman of the Year accolade, and the lone libero among that group ... also a member of the MVC All-Freshman Team ... stepped right into the starting libero spot for the Crusaders from day one, appearing in all 117 sets ... recorded 686 digs on the season – a new Valpo freshman record and fourth-most overall in a single season in program history ... average of 5.86 digs/set ranked second in the MVC, ninth nationally and topped all Division I freshman, as Cookerly was one of just two rookies to rank among the top-25 in the nation in digs ... led the way as Valpo averaged 20.03 digs/set as a team to lead the nation in the category ... reached double figures in digs in 31 of her 33 matches, including 18 outings with at least 20 digs ... also ranked second on the team in service aces (26) and ranked 10th in the conference in aces/set in MVC-only play ... committed just 12 serve reception errors in MVC play, posting a reception percentage of .969 ... stood out with her play in the back row when the opposition was toughest, highlighted by her debut as a Crusader at Notre Dame Aug. 25, when she set a new school record with 43 digs in a single match ... over five matches against the AVCA’s top-50 teams, raised her average to 7.20 digs/set, while over eight total matches against the AVCA’s top-100 teams, she came in at 6.75 digs/set – well above her overall average ... 43-dig effort at Notre Dame not only set a new program single-match record, but was the third-highest total in a four-set match nationally in 2017 ... earned All-Tournament Team accolades at Notre Dame's Golden Dome Invitational opening weekend ... named MVC Freshman of the Week Sept. 5 after averaging 7.10 digs/set in three matches at SDSU's Jackrabbit Invitational Sept. 1-2, including a 28-dig effort in a three-set match against Northern Arizona ... posted a season-high six assists on three occasions (Sept. 9 versus Binghamton; Oct. 7 at Illinois State; Oct. 20 at Drake) ... tallied a season-best three service aces Oct. 6 in win at Bradley ... registered at least 20 digs in 10 matches against MVC opposition, including a high-water mark of 29 digs at #25 UNI on Oct. 21.

Personal: Daughter of Al and Wendy Cookerly ... major is nursing.