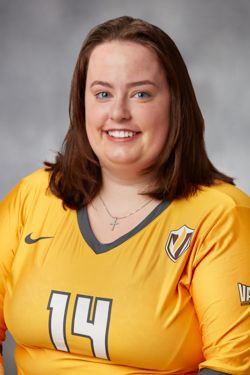 2019: Appeared in 34 sets over 19 matches as a sophomore ... finished year with 24 digs ... had standout effort Nov. 22 in come-from-behind win at Drake, tallying 12 digs over the final three sets to help Valpo rally from two-set deficit ... also handed out an assist and received eight serves without an error in the win over the Bulldogs ... tallied five digs the next night at UNI ... recorded a pair of digs in MVC Tournament semifinal win over Bradley Nov. 28 ... registered a service ace Nov. 15 against Illinois State.

2018: Appeared in 51 sets over 22 matches in her first year at Valpo ... finished season with 28 digs, seven service aces and three assists ... 22 of her 28 digs came in the season's final six matches, as she averaged an even dig per set over that stretch ... debuted Aug. 24 against Saint Francis, picking up a dig ... recorded an assist and a service ace Aug. 25 in win over Iona ... registered a pair of service aces against UNI Sept. 29 ... set season high with eight digs in regular season finale win at Southern Illinois Nov. 17 ... picked up three digs in MVC semifinal against UNI Nov. 23 ... recorded three digs in NIVC first-round win over Ball State Nov. 29 and five digs in second-round victory at Miami (Ohio) the next night.

Personal: Daughter of Patrick and Mary Daniels ... major is nursing.