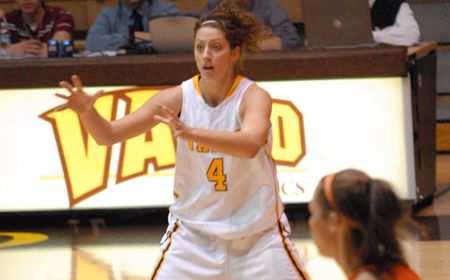 Lauren Kenney had 11 points and 15 rebounds against the Irish. (Ray Acevedo)
#8/8 Notre Dame at Valparaiso | December 13, 2008
Related Links
Related Links
Valparaiso rallied from a 12-point first half deficit, and took a three-point lead with 6:50 to play, but Notre Dame held off the Crusaders’ upset bid closing the game with a 17-6 run as the eighth-ranked Fighting Irish defeated the Brown and Gold 63-55 on Saturday afternoon in front of more than 2,000 fans at the Athletics-Recreation Center.

“I am proud of our kids and their effort today,” head coach Keith Freeman said.  “These games are hard and it takes a lot of out of you.”

The Crusaders missed 16 straight shots in the first half to fall behind, but battled back throughout the second half while looking to defeat its second straight top-25 foe.

Valpo started the game blazing from the floor, making six of its first seven shots while racing out to a 15-8 lead at the 15:24 mark following an offensive put-back by Ashley Varner (South Bend, Ind./Washington H.S.).

At that point the Crusaders went cold from the floor, missing their next 16 shot from the field over a span of 12:46 which saw Notre Dame go on a 20-1 run and build a 28-16 lead with 2:55 to play before intermission.

The Crusaders chipped away, and Agnieszka Kulaga’s (Tarnow, Poland/I Liceum Ogolnoksztalcace H.S.) three-pointer with 12 seconds to play before break brought Valpo within 32-24 at halftime.

Notre Dame scored on the first possession out of the locker room, but Valpo went on a 7-0 run, capped by a pair of free throws from Lauren Kenney (Mooresville, Ind./Mooresville H.S.) brought Valpo to within three, 34-31, with 17:53 to play.

Notre Dame pushed the lead back to seven on a jumper by Ashley Barlow before the Crusaders made another run.  Kulaga’s lay-up at the 10:39 mark cut the lead to one and Aimee Litka’s (South Bend, Ind./Saint Joseph’s H.S.) three-pointer tied the contest at 42 with 9:47 to play.

With the crowd into the game, Kenney retied the contest at 44 and Kulaga’s two free throws at the 7:28 mark put the Brown and Gold in front for the first time since the 10-minute mark of the first half.  Melissa Lechlitner tied the game on the Fighting Irish’s next possession, only to have Launa Hochstetler (Berlin, Ohio/Hiland H.S.) drain a triple to put the Crusaders up by three with 6:50 to play.

Lechlitner scored on back-to-back possessions before Hochstetler’s pull-up jumper gave Valpo its final lead of the game, 51-50, with 5:38 to play.

“I thought we battled back to make it a five-minute game,” added Freeman.  “It comes down to a loose ball here, a bounce there.”

Ashley Barlow scored inside and followed with a three-pointer that bounced on the rim several times before falling for Notre Dame’s only triple of the contest, to put the Fighting Irish up by four.

Whitney Farris (Kokomo, Ind./Kokomo H.S.) picked up loose ball as the shot clock wound down and laid it to draw within two, but that would be as close as the Crusaders would get.

Three straight baskets by Notre Dame put the game out of reach.

“We have to get defensive stops,” concluded Freeman.  “The last five minutes we were unable to control the dribble penetration from Lechlitner.”

Kenney registered her first double-double with the Crusaders, scoring 11 points and registering a game-high 15 rebounds, including six on the offensive end.  Kulaga led the Crusaders with 12 points.

Valparaiso’s (4-3) challenging schedule continues a week from Sunday as the Crusaders head to Brookings, S.D. for a 2 p.m. contest against South Dakota State.  The Jackrabbits were on the verge of the top-25 last week, and may enter the polls prior to the contest with Valpo.  The game can be heard live on WVUR (95.1-FM, Valparaiso) and online at www.valpoathletics.com.

“We couldn’t have scheduled much tougher than we have this year,” ended Freeman.

Game Notes: Valpo played top-25 teams in back-to-back games for just the second time in program history … this marked just the second time the Crusaders have hosted two top-25 teams in the same year … Varner scored a career-high seven points against her hometown team … Sylwia Zabielewicz (Warsaw, Poland/Generala Wladyslawa Andersa H.S.) scored a season-high six points … the Crusaders held Notre Dame to just 1-of-9 from three-point range after the Irish entered the game shooting 43.6% from three-point range … rebounding ended even 39-39 … Notre Dame has won all 22 meetings between the two schools … 2,046 were in attendance on “Pack the ARC” day.