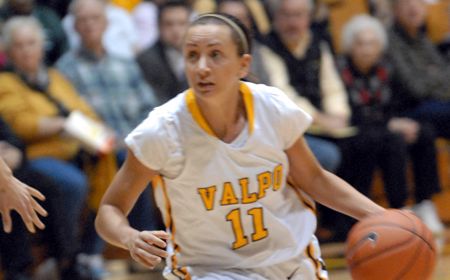 Kulaga, an Academic All-District V Second Team selection a year ago, is averaging 11.1 points and 3.3 rebounds per game for the Crusaders this season.  The senior guard currently leads the Horizon League and is sixth in the nation in free throw shooting percentage, making 89.8% of her attempts this year.  Her 836 career points rank her in a tie for 20th all-time at Valpo in scoring.

In the classroom Kulaga had a 3.80 grade point average in undergraduate work in international business and currently maintains a 3.91 GPA as a business administration master’s student.  She has been named to the Horizon League’s Fall Academic Honor Roll this year as well.  Having been voted to the First Team, Kulaga is also eligible to earn Academic All-America honors.

Hochstetler is averaging 10.6 points and 4.4 assists per game for the Brown and Gold this year.  A senior guard, she leads the Horizon League in assists.  Second in free throw shooting behind Kulaga in the conference, Hochstetler’s 87.2% shooting ranks her 18th in the nation.  She is sixth all-time at Valpo with 309 career assists.

To be eligible for Academic All-District and Academic All-America, student-athletes must hold at least sophomore status, own a minimum grade-point average of 3.20, and be either a starter or key reserve.  District V consists of schools in Indiana, Illinois, Wisconsin, Minnesota, Ontario, and Manitoba.