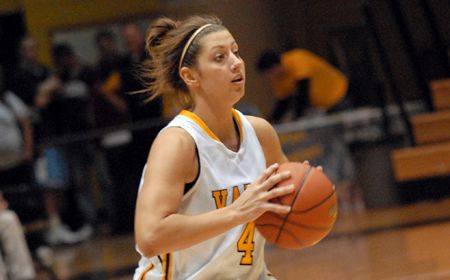 Valparaiso shot just 26.7% from the floor for the game and went more 11:40 without a field goal in the first half, falling 62-47 to Detroit on Friday evening at the Athletics-Recreation Center.

“You have to give Detroit credit,” head coach Keith Freeman said.  “They are slightly bigger than us and they contested shots.  (Heather) Hatter bothered us, getting all of our posts in foul trouble.”

Things started off strong for the Brown and Gold, as Valpo raced out to a 13-3 just over eight minutes into the game.  The Crusader defense held the Titans without a field goal for the first 9:11 of the game, as Detroit started 0-of-7 from the floor while committing seven turnovers, five coming on Valpo steals.

“I thought we got off to a good start,” Freeman added.  “I think we just lost confidence offensively.”

From there Valpo went cold, not scoring again from the floor until Sylwia Zabielewicz (Warsaw, Poland/Generala Wladyslawa Andersa H.S.) converted on a lay-in in the paint with 1:11 to play before intermission.

A 14-3 run put Detroit on top for the first time, 17-16, with 2:30 to play following a three-pointer by Lauren Allen.  The game remained tight the rest of the half and the teams went into the locker room tied at 23.

Out of the break, the Titans built a 30-25 lead in the first five minutes of the second stanza following a triple by Chanica Hall.  The Crusaders answered with six straight points, taking a 31-30 lead on a three by Leah Hochstetler (Berlin, Ohio/Hiland H.S.).

Detroit answered with a Hatter lay-up on the next possession to start a 10-0 over the next two-and-a-half minutes and Valpo would not lead again the rest of the way.

Valpo whittled the lead down to three, 44-41, following a three-pointer by Aimee Litka (South Bend, Ind./Saint Joseph’s H.S.) with 7:08 to play before Detroit scored 10 straight points yet again to put the game out of reach.

Kenney led Valpo with her third double-double as a Crusader, scoring 13 points and 10 rebounds, while Launa Hochstetler added 12 points.

Brigid Mulroy and Hatter had 13 points to pace Detroit (7-14, 3-7 Horizon League), while Hall added 11 points and eight assists.  Sandi Brown grabbed a game-high 12 rebounds, five on the offensive end, and had all eight of her points in the second half.

After committing just seven turnovers in the first half, Valpo committed 10 in the second, leading to 11 Detroit points.

Valparaiso (10-10, 5-5) will remain at home on Sunday afternoon for a 1:35 p.m. contest as the Crusaders welcome Wright State to the ARC.  The game can be seen live on the Horizon League Network and will also be carried live on WVUR (95.1-FM, Valparaiso).