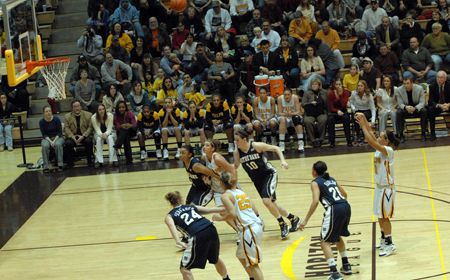 Coming Up in Crusader Hoops: Valparaiso heads to the Windy City of Chicago on Thursday evening to begin a two-game road trip at Loyola.  The Crusaders are coming off of a six-point victory against Wright State on Sunday afternoon, and will look to maintain momentum heading into the final month of the regular season.  Valpo remains in a tie for fifth in the Horizon League standings, but is just a game out of the third spot.

On the Air: Thursday’s game against Loyola will be carried live on the Horizon League Network at horizonleaguenetwork.tv or through the link at valpoathletics.com.  In addition, the game can be heard live on WVUR (95.1-FM, Valparaiso) and through the Valpo athletics website.  Adam Amin and Adam Tein will call all of the action live from the Gentile Center.  Live stats are also available via Gametracker through valpoathletics.com.

Series Notes: Valparaiso leads the all-time series against Loyola 13-1, including holding a 6-1 advantage in Chicago.  The Crusaders have won the last two meetings between the two schools, including a 69-52 win at the ARC earlier this season on January 17.  Loyola’s lone win came on January 12, 2008, a 64-60 win at the Gentile Center in the first meeting as Horizon League foes.  In this year’s first meeting, Launa Hochstetler scored 18 points and Aimee Litka added 17 for the Brown and Gold as the Crusaders forced 26 Loyola turnovers.  Shannon Finnegan led the Ramblers with 11 points off of the bench.

Wrapping Up Wright State: The Crusaders got 22 points and six assists from Launa Hochstetler and had four players score in double figures on Sunday afternoon on the way to a 64-58 victory over the Raiders.  Aimee Litka added 14 points for Valpo while Whitney Farris had 10 points and seven rebounds.  Shey Peddy led Wright State with 15 points.

Scouting Loyola: The Ramblers have dropped 11 of their last 12 games following a 64-50 setback at UIC on Saturday.  Elyse VanBogaert leads Loyola in scoring, and ranks ninth in the Horizon League, averaging 11.6 points per game.  Maggie McCloskey adds 10.5 points per game, and leads the league making 2.8 three-pointers per game while shooting 43.3% from beyond the arc.

Super Woman: Launa Hochstetler played all 40 minutes on Sunday against Wright State for the second time this season, scoring 22 points and dishing out six assists.  She also went the distance in Valpo’s upset victory against Purdue back on December 10.  For her career, she has played the entire game five times at Valpo, including all 45 minutes of an overtime contest last year against Green Bay.

Farris Finds Double Figures in Scoring: Whitney Farris scored 10 points on Sunday afternoon for her third double-figure scoring day of the season.  The junior forward had not registered a double-digit effort since posting back-to-back 12 and 14-point efforts to open the month of January against Youngstown State and Cleveland State.

Shooting Well Since Returning to the Court: Lauren Kenney has made a difference since returning to the lineup following and ankle injury that sidelined her for six games.  The junior is shooting 60.9% from the floor since her return and averaging 6.6 points per game while playing 15.4 minutes per night.  On the year Kenney is scoring 10.7 points per game and shooting 52.6% from the field.

Taking Care of the Ball in League Play: Valpo is averaging just 17.0 turnovers per game during Horizon League action after committing 18.5 miscues during non-conference action.  Last weekend against Detroit and Wright State, the Crusaders committed just 31 total turnovers between the two games.  Valpo’s turnover margin of +3.6 in conference play is second best in the league.

Shooting Percentage a Telling Tale: Valpo has posted a 9-3 record this season when shooting better than its opponents from the floor.  However, the Brown and Gold is just 2-7 when trailing in that category.

Outrebounded of Late: After starting the season crashing the glass, Valpo has been outrebounded in seven straight games and nine of its last 10 after being outboarded 32-29 on Sunday against Wright State.

From Downtown: Valpo leads the Horizon League averaging 6.1 three-pointers per game this season.  The Crusaders have already made 128 triples this year, led by Aimee Litka who has made 48 (2.3 per game).  The senior is second in the Horizon League in triples per game individually.

Among the Nation’s Best at the Free Throw Line This Year...: Agnieszka Kulaga and Launa Hochstetler rank 6th and 25th respectively in all of NCAA Division I at the free throw line this season through games of February 8.  Kulaga also leads the Horizon League shooting 90.2% (55-of-61) from the line this year while  Hochstetler is an 85.7% (78-of-91) shooter this year.

... and Also All-time at Valpo: Launa Hochstetler and Agnieszka Kulaga both have surpassed the 225 attempt minimum from the free throw line to qualify on the all-time free throw percentage charts at Valpo.  Hochstetler enters the game tops all-time as an 84.5% career free throw shooter while Kulaga ranks second making 83.8% of her attempts.  Entering this season, Mo Drabicki (1994-1998) was at the top of the list shooting 83.0% for her career.

Litka and Kulaga Move Into Top-20 All-Time at Valpo in Scoring: Aimee Litka has moved into 19th place all-time at Valpo with 855 career points.  She is 13 points shy of Kathryn Knoester (2000-2004) for 18th on the Crusaders’ all-time scoring charts.  Agnieszka Kulaga has moved into 20th place on the all-time list, trailing Litka by seven points.

Surpassing 300 Assists: Launa Hochstetler’s feed to Whitney Farris with 13:53 to play in the second half against Loyola made the senior just the sixth Crusader in school history to reach the 300 assist mark for a career.  Hochstetler currently has 317 career assists and needs just 23 more helpers to move into the top-five all-time wearing the Brown and Gold.

Kulaga Moves Into Top-15 in Assists: Agnieszka Kulaga had one assist against Wright State and now has 234 career assists to rank 13th all-time wearing the Brown and Gold.  She now trails Jeanette Gray (1999-2003) by just four helpers for 12th on the all-time list.

Litka Moves Into Top-5 All-Time in Triples: Aimee Litka made two more three-pointers against Wright State on Sunday afternoon and has now passed Jamie Gutowski (2002-2006) to move into fifth place tie all-time at Valpo for triples made in a career.  Litka now has 153 treys in four seasons, and is 18 triples shy of Sarah Lenschow’s fourth place total of 171 threes.