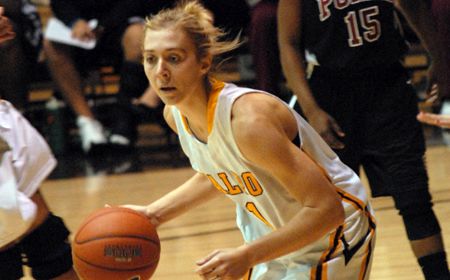 Coming Up in Crusader Hoops: After moving into fourth place in the Horizon League standings following a 25-point victory over Loyola (Chicago) on Thursday evening, the Valparaiso Crusaders return to the Windy City on Saturday night for a Valentine’s Day game against UIC.  The two schools have identical 12-10 records overall and are separated by just one-half game in the Horizon League standings.

On the Air: Saturday’s game against UIC will be carried live on the Horizon League Network at horizonleaguenetwork.tv or through the link at valpoathletics.com.  In addition, the game can be heard live on WVUR (95.1-FM, Valparaiso) and through the Valpo athletics website.  David Schroeder and Adam Tein will call all of the action live from the UIC Pavilion.  Live stats are also available via Gametracker through valpoathletics.com.

Series Notes: Valparaiso leads the all-time series against UIC 18-11 and has won the last seven meetings between the two schools including a 66-64 victory at the ARC back on January 15.  The Flames hold a slim 7-6 series edge in Chicago, but have not defeated the Crusaders since March 10, 1994, a 65-62 win in DeKalb, Ill. in the Mid-Continent Conference Tournament.  In the first meeting this season, Launa Hochstetler led all scorers with 24 points for Valpo, which saw its 16-point second half lead reduced to just two in the final minute.  Meghan Hutchens led the Flames with 16 points.

Wrapping Up Loyola (Chicago): The Crusaders made 11 first half three-pointers on the way to a 29-point halftime lead and defeated the Ramblers 85-60 on Thursday evening in Chicago.  Aimee Litka made five first half triples on her way to a team-high 15 points and seven rebounds while Agnieszka Kulaga added 14 points and six assists for the Crusaders.  Brittany Boeke led all scorers with 18 points for Loyola.

Scouting UIC: The Flames have dropped three of their last four games following a 68-49 setback at home against Butler on Thursday night.  UIC has been a solid home team all season, posting a 9-4 mark at the UIC Pavilion.  Jessie Miller leads three Flames that average double figures in scoring with 12.9 points per game, ranking fourth in the Horizon League.  The Flames are the league’s top rebounding team grabbing 39.7 boards per night as well as blocking 4.0 shots per game.

Dialing Long Distance: Valpo’s 13 three-point field goals against Loyola on Thursday night tied for the seventh most in school history for a single game.  The Crusaders made 11-of-15 triples in the first 20 minutes, and shot 59.1% for the game, tied for the 10th best long range percentage all-time (minimum 10 attempts).

Litka From Deep: Aimee Litka hit five first half three-pointers against Loyola to lead the long range barrage.  The senior is second in the Horizon League averaging 2.4 triples per game this season, and also ranks 38th nationally in that category.  Thursday was the fifth time this year Litka has connected on at least four treys in a game.

Add Another to Double Digits: Rashida Ray scored a season-high 11 points for Valpo on Thursday evening against Loyola and became the 11th different Crusader this season to score in double figures for the Brown and Gold.  The sophomore guard made 3-of-4 from three-point range while playing a season-high 20 minutes.

Taking Care of the Ball: Valpo is averaging just 16.4 turnovers per game during Horizon League action after committing 18.5 miscues during non-conference action.  The Crusaders committed a season-low 10 miscues at Loyola on Thursday, and over the last three games have averaged just 13.7 per game.

Lineup Shuffling: Coach Keith Freeman unveiled his eighth different starting lineup of the season against Loyola.  The Crusaders started the season using the same lineup for the first nine games, but have used seven different ones over the past 13 contests.  Aimee Litka and Launa Hochstetler are the only two Crusaders to have started every game this year.

Getting Out on the Break: Valparaiso outscored Loyola 19-0 on fast break points on Thursday evening.  The Crusaders had not had more than 10 fast break points in a game all season prior to facing the Ramblers, but had 15 by halftime in that game.

Big Homestand On Deck: After travelling to Chicago, the Crusaders will return to the ARC for the final homestand of the year.  Valpo will play four straight home games beginning on February 17, including contests with the top two teams in the league, Butler and Green Bay.

Think Pink: The Saturday, February 21 games against Butler has been designated as “WBCA Pink Zone” to raise awareness against breast cancer.  Prior to the game, breast cancer survivors will be honored and the first 200 fans will be given pink t-shirts.

Looking to Match Longest Win Streak of the Season: Valpo looks for its third straight win against UIC on Saturday, which would match its longest winning streak of the year.  The Crusaders also won three straight from January 10-17.

Among the Nation’s Best at the Free Throw Line This Year...: Agnieszka Kulaga and Launa Hochstetler rank 5th and 23rd respectively in all of NCAA Division I at the free throw line this season through games of February 12.  Kulaga also leads the Horizon League shooting 90.2% (55-of-61) from the line this year while  Hochstetler is an 6.0% (80-of-93) shooter this year.

... and Also All-time at Valpo: Launa Hochstetler and Agnieszka Kulaga both have surpassed the 225 attempt minimum from the free throw line to qualify on the all-time free throw percentage charts at Valpo.  Hochstetler enters the game tops all-time as an 84.6% career free throw shooter while Kulaga ranks second making 83.8% of her attempts.  Entering this season, Mo Drabicki (1994-1998) was at the top of the list shooting 83.0% for her career.

Surpassing 300 Assists: Launa Hochstetler’s feed to Whitney Farris with 13:53 to play in the second half against Loyola made the senior just the sixth Crusader in school history to reach the 300 assist mark for a career.  Hochstetler currently has 321 career assists and needs just 19 more helpers to move into the top-five all-time wearing the Brown and Gold.

Kulaga Moves Into Top-15 in Assists: Agnieszka Kulaga had six assist against Loyola and now has 240 career assists to move past rank Jeanette Gray (1999-2003) into 12th place all-time wearing the Brown and Gold.  She now trails Megan Newcomer (1996-2000) by just seven helpers for 11th on the all-time list.

Litka Moves Into Top-5 All-Time in Triples: Aimee Litka made five more three-pointers against Loyola on Thursday evening and has moved into fifth place tie all-time at Valpo for triples made in a career.  Litka now has 158 treys in four seasons, and is 13 triples shy of Sarah Lenschow’s fourth place total of 171 threes.