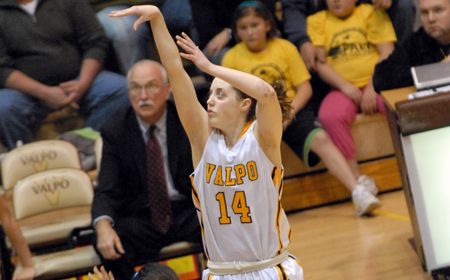 Jessie Miller scored 16 of her 20 points in the second half and UIC held Valparaiso to just 32.7% shooting for the game as the Flames defeated the Crusaders 61-50 on Saturday night at the UIC Pavilion in Chicago, Ill.

“Miller was the difference in the game tonight,” head coach Keith Freeman said.  “She was active, and a moving prescence on both offense and defense.”

As hot as the Crusaders were on Thursday in the win at Loyola, they started just the opposite on Saturday night.  Valpo made just three of their first 14 shots from the floor, falling behind 17-10 following five straight points by the Flames’ Shameia Green.

Agnieszka Kulaga (Tarnow, Poland/I Liceum Ogolnoksztalcace H.S.) snapped an eight-minute scoring drough from the floor with a three-pointer and Lauren Kenney (Mooresville, Ind./Mooresville H.S.) followed with a three-point play inside to bring the Crusaders within one.

A 10-foot jumper by Kulaga at the 3:05 mark gave the Crusaders their first lead of the game, capping an 8-0 Valpo run.

UIC finished the half with a flourish though, and a jumper at the horn by Kristin Petrinec gave the Flames a 23-20 advantage at intermission.

The Flames got to the glass in the first 20 minutes, outrebounding Valpo 21-14, grabbing eight offensive boards.

An Aimee Litka (South Bend, Ind./Saint Joseph’s H.S.) brought Valpo to within two, 27-25, with 17:52 to play, but that would be as close as the Crusaders would get the rest of the way.

UIC went on a 17-6 run with Miller scoring 10 of the points as the Flames built a 13-point lead with 10:25 to play.  The Crusaders were able to get back within eight, 46-38, with just under eight minutes to play, but could not get any closer the rest of the way.

Launa Hochstetler (Berlin, Ohio/Hiland H.S.) led the Crusaders with 17 points while tying her career high with nine rebounds.  The senior guard also dished out four assists on the night.  Kulaga added 14 points as the only other player for Valpo to tally double figures.

“We need to play with greater energy,” added Freeman.  “They won all of the intangibles.  We didn’t compete at the level we needed to compete at.”

Miller finished 9-of-16 from the floor and also dished out six assists without committing a turnover for UIC (13-10, 7-5 Horizon).  Green added 13 points while Meghan Hutchens scored 10 points and had seven boards.

The Flames outrebounded Valpo 41-31 for the game, grabbing 12 offensive boards on the night.

Valparaiso (12-11, 7-6) will return to the Athletics-Recreation Center on Tuesday evening to begin their final homestand of the season hosting Chicago State.  Tip-off in the final non-conference tilt of the season, and the first of four straight games at the ARC is set for 7:05 p.m. with all of the action carried live on the Horizon League Network and on WVUR (95.1-FM, Valparaiso).