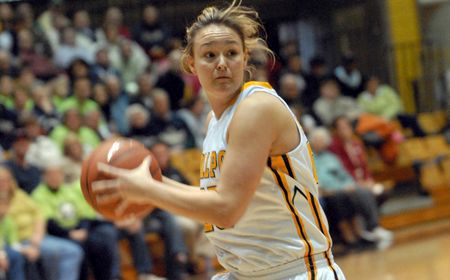 Coming Up in Crusader Hoops: Winners of four of their last five games, including a 10-point victory over second place Butler on Saturday afternoon, the Valparaiso Crusaders continue their homestand on Thursday evening entertaining first place Green Bay at the ARC.  Valpo will be looking to end the Phoenix 15-game winning streak.  Tip-off is 5:30 p.m. and is part of a doubleheader with the men’s team.

On the Air: Thursday’s game against Butler will be carried live on the Horizon League Network at horizonleaguenetwork.tv or through the link at valpoathletics.com.  In addition, the game can be heard live on WVUR (95.1-FM, Valparaiso) and through the Valpo athletics website.  Danny Robertson and Adam Amin will call all of the action live from the ARC.  Live stats are also available via Gametracker through valpoathletics.com.

Series Notes: Green Bay leads the all-time series against the Crusaders 17-4, and holds an 8-2 advantage in Valparaiso.  The Phoenix have won the last two meetings between the two schools, including a 76-45 win in Green Bay earlier this year on January 31.  In that game, Heather Golden led all scorers with 13 points for the Phoenix while Leah Hochstetler led Valpo with nine points off of the bench.  Valpo’s last win in the series came on January 19, 2008, a 90-88 overtime win at the ARC in a game that marks Green Bay’s last Horizon League regular season loss.

Wrapping Up Butler: Valpo shot nearly 61% from the floor in the first half and withstood several second half runs by the Bulldogs in defeating Butler 75-65 on Saturday afternoon at the ARC.  Launa Hochstetler tied a career high with 24 points while Aimee Litka added 13 for the Brown and Gold.  Lade Akande led the Bulldogs with 16 points as Valpo outscored Butler 32-26 in the paint.

Scouting Green Bay: The Phoenix have the nation’s third longest winning streak, having won 15 straight games, following an 88-44 victory over Loyola (Chicago) on Saturday.  Seven players are averaging seven or more points per game for Green Bay, led by Lavesa Glover, who ranks 12th in the Horizon League in scoring averaging 11.1 points per game.  As a team, the Phoenix lead the conference in scoring offense (66.2 ppg), scoring defense (50.1 ppg), and field goal percentage (.460).  Green Bay has clinched at least a share of the Horizon League title.

Matching a Career High Yet Again: Launa Hochstetler tied a career high with her 24 points against Butler on Saturday afternoon.  The senior guard first tallied 24 points at South Dakota State and then matched the total at home against UIC.  She leads Valpo in scoring on the season, averaging 12.0 points per game, ranking eighth in the Horizon League.  In conference games only, Hochstetler has bumped her production up to 13.3 points per game, fifth most in the conference.

Scoring Machines: Agnieszka Kulaga and Launa Hochstetler are both paving the way offensively for the Crusaders as of late.  Kulaga has scored 10 or more points in five straight contests after tallying 11 against Butler on Saturday afternoon.  Hochstetler’s streak of double figure games has reached six following her 24-point effort on Saturday as well.

A Tight Race: With four games remaining in the regular season, Valpo currently sits in fourth place, one game ahead of UIC in the race to host the final quarterfinal in the Horizon League Tournament.  The middle of the standings are bunched though, as the Crusaders are just a game-and-a-half up on sixth and seventh place, with the seventh place finisher having to host an opening round game two nights prior to the quarterfinals.

That’s A Lot of Games Played: With two more appearances, Launa Hochstetler will move into the top-10 all-time at Valpo for games played.  Thursday’s game against Green Bay will be the 114th of her career, one shy of Cheryl Wilbrandt’s (1989-1993) 10th place mark of 115 games.

Home Court Advantage: Valpo has posted an 8-3 mark at home this season to continue its stellar play at the Athletics-Recreation Center.  The Crusaders have not lost more than four home games in a season since 2000-2001 and have posted a 79-23 (.775) record at the ARC since then.  This year, Valpo defeated #23/21 Purdue at home and opened the year with a win against Bowling Green.  Since that game, the Falcons have not lost, winning 23 consecutive games.

Among the Nation’s Best at the Free Throw Line This Year...: Agnieszka Kulaga and Launa Hochstetler rank 5th and 22nd respectively in all of NCAA Division I at the free throw line this season through games of February 22.  Kulaga also leads the Horizon League shooting 89.9% (62-of-69) from the line this year while  Hochstetler is an 85.6% (89-of-104) shooter this year.

... and Also All-time at Valpo: Launa Hochstetler and Agnieszka Kulaga both have surpassed the 225 attempt minimum from the free throw line to qualify on the all-time free throw percentage charts at Valpo.  Hochstetler enters the game tops all-time as an 84.5% career free throw shooter while Kulaga ranks second making 83.9% of her attempts.  Entering this season, Mo Drabicki (1994-1998) was at the top of the list shooting 83.0% for her career.

Kulaga and Litka Move Into Top-20 All-Time at Valpo in Scoring: Agnieszka Kulaga and Aimee Litka continue to chase one another on the all-time scoring charts.  Kulaga has moved into 16th place passing Heidi Diefenthaler (1992-1996) with 899 career points after scoring 11 against Butler on Saturday.  Litka has moved into 18th place all-time at Valpo with 886 career points, passing Michelle Russell (1991-1994).  Kulaga needs 21 more points to match Sarah Schmoyer’s (1992-1996) 15th place mark of 920 points while Litka needs 10 to match Diefenthaler and 13 to match Kulaga.

Kulaga Moves Into Top-15 in Assists: Agnieszka Kulaga had three assists against Butler and now has 245 career assists to move past rank Jeanette Gray (1999-2003) into 12th place all-time wearing the Brown and Gold.  She now trails Megan Newcomer (1996-2000) by just two helpers for 11th on the all-time list.

Litka Moves Into Top-5 All-Time in Triples: Aimee Litka made two more three-pointers against Butler last Saturday afternoon and has moved into fifth place all-time at Valpo for triples made in a career.  Litka now has 161 treys in four seasons, and is 10 triples shy of Sarah Lenschow’s fourth place total of 171 threes.