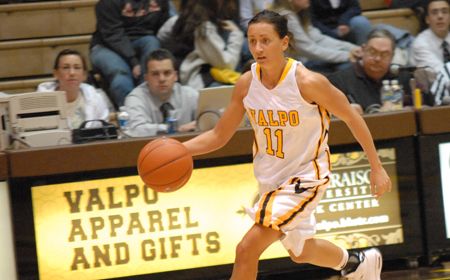 Agnieszka Kulaga (Tarnow, Poland/I Liceum Ogolnoksztalcace H.S.) made a career-high seven three-pointers on nine attempts, and finished with 23 points, as Valparaiso secured a home quarterfinal in next week’s Horizon League Tournament with a 70-52 victory over Cleveland State on Thursday evening in Cleveland, Ohio.

Kulaga made her first six from long range as the Crusaders finished the night 11-of-21 (52.4%) as a team from beyond the arc.

“It’s just a magnificent performance when you shoot like that,” head coach Keith Freeman said of Kulaga.  “She did a good job of taking the shots she was given.”

The Crusaders got off to an early lead, 12-7, six minutes into the contest as Aimee Litka (South Bend, Ind./Saint Joseph’s H.S.) hit a three-pointer as the shot clock expired from about 24 feet.

Cleveland State scored the next 10 points to take its first lead of the game as Shawnita Garland scored eight of the Vikings’ first 17 points points of the game.  The Crusaders had seven turnovers in the first 11 minutes to allow the Vikings to take the 17-12 lead.

The lead grew to 26-20 with 4:23 to play before back-to-back triples by Kulaga tied the game at 26 with 2:30 to play as the Crusaders connected on six of their first 10 threes in the game.

Kulaga took over to start the second half.  Her drive and scoop pushed the lead to six, and, after a Cleveland State three, hit back-to-back triples to put the Crusaders up nine, 40-31, with 16:27 to play.

Both sides traded baskets, with Valpo keeping the lead between seven and nine when Launa Hochstetler (Berlin, Ohio/Hiland H.S.) connected on back-to-back baskets to give the Crusaders a 46-37 advantage with 11:37 to play.  She had been on the passing end, dishing out seven assists in the first 28 minutes.

A Litka triple pushed the lead to 11, the first of seven straight Crusaders points the senior would score.  Her last, a driving lay-in, made it 54-41, with 7:17 to play when the scoreboards went out, causing a brief delay.

The stoppage did not slow the Crusaders, as they continued their run with Whitney Farris (Kokomo, Ind./Kokomo H.S.) scoreing inside to make it 61-42 with 5:27 to play in the game, capping an 11-3 spurt.

The Vikings could not get any closer than 16 the rest of  the way, as the Crusaders clinched at least a tie for fourth place in the conference standings, and have the tie-breakers with Wright State to host a first round game next Wednesday.  Valpo will face the winner of Saturday’s Wright State-UIC contest.

“We played good team defense tonight,” said Freeman.  “We rebounded the ball against a good rebounding team.  We moved the ball well and took care of it.  It was just a good complete game on both sides of the basketball.”

“Launa continues to play a good all-around floor game for us,” said Freeman.

“Aimee did a solid job on Klein,” said Freeman.  Klein entered the game second in the Horizon League in scoring averaging 17.2 points per night.

Valpo held a 35-30 advantage on the glass and outscored the hosts 26-10 in the paint.  The Crusaders also shot nearly 46% from the field compared with the Vikings’ 35%.

Valparaiso (16-12, 10-7) will wrap up the regular season on Saturday afternoon in Youngstown, Ohio  Tip-off is set for 1:05 p.m. CST, with all the action carried live on the Horizon League Network as well as on WVUR (95.1-FM, Valparaiso). against the Penguins of Youngstown State.

Game Notes: Valpo has clinched its 17th winning season in the last 19 years … the Crusaders hold a 12-4 series lead against the Vikings and are a perfect 8-0 in Cleveland … Hochstetler played in her 116th game all-time at Valpo, tied for eighth most in school history … Kulaga now has 950 career points, 15th most in school history … Litka passed Sarah Schmoyer (1992-1996) into 16th place on the all-time scoring list with 923 career points.