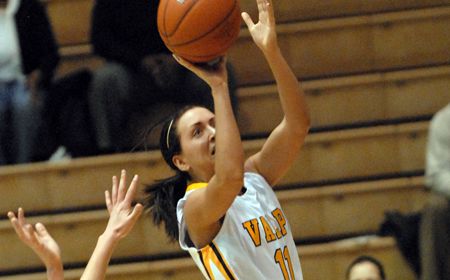 Valparaiso committed 23 turnovers and gave up 18 offensive rebounds, 13 in the second half, and saw its season come to a close on Wednesday evening, falling 64-59 to Wright State in the quarterfinals of the 2009 Speedway Horizon League Championships at the Athletics-Recreation Center.

The Raiders converted the 18 second chance opportunities into 16 points, including 12 in the second half, to overcome an eight-point deficit with 10 minutes to play.

“This was the type of game I thought it would be,” head coach Keith Freeman said.  “It was very physical.  Second shots hurt us. That was the difference in the game, second chance points.”

Wright State got off to an early 6-0 lead as the Crusaders committed five turnovers and missed two shots on their first seven possessions of the game.  After Valpo clawed back within one, Wright State went on a 9-1 run to take a 17-8 lead with 9:14 to play in the first half.

Valpo answered with seven straight points to pull within 19-17, following a lay-up by Lauren Kenney (Mooresville, Ind./Mooresville H.S.).  A 10-2 run to close the first half, keyed by a three-point play by Aimee Litka (South Bend, Ind./Saint Joseph’s H.S.) as well as a triple by the senior, put Valpo on top 27-23 at the break.

“I think we showed a lot of guts how well we finished the half based on how we started,” said Freeman.  “I’m really proud of these kids.”

The Raiders tied the game at 27 just a minute into the second half on four second chance points.

“Where we got beat was on possessions like at the start of the second half.  We gave them three chances to begin the half and then they scored.  On the next possession we give up a rebound and then foul them.”

Wright State took the lead, 37-35, following a three-pointer by Kanisha Ward, but Valpo responded.  A 14-4 run, including six points inside from Kenney, gave the Brown and Gold its biggest lead of the game, 49-41, with 10:07 to play.

The Crusaders would manage just two field goals the rest of the way, though, and did not score for the next five minutes.  The Raiders tied the game at 51 with 4:21 to play, but Valpo would take its final lead of the game, 54-53, at the 2:34 mark on a free throw by Launa Hochstetler (Berlin, Ohio/Hiland H.S.), who wrapped up her career in a Crusader uniform.

Ta-Myra Davis scored inside on the next possession for Wright State, and following a Valpo miss, Shey Peddy drained a deep three-pointer with 1:10 to play as the shot clock wound down.

Valpo turned the ball over and was forced to foul the rest of the way.

“I thought Wright State made some great adjustments in the second half based upon how we were guarding them,” said Freeman.  “We didn’t wrap up possessions like we needed to to win games.”

Senior Agnieszka Kulaga (Tarnow, Poland/I Liceum Ogolnoksztalcace H.S.) finished with a game-high 19 points.  Litka, who also saw her career come to a close, added 14 points, making 5-of-8 from three-point range, while Kenney also had 14 points and a team-high six rebounds.

Davis led Wright State (15-15) with 17 points and a game-high eight boards while LaShawna Thomas added 16 points on 8-of-12 shooting.  Peddy added 12 points and six steals for the Raiders.

Valparaiso, the tournament’s fourth seed, wraps up its season 16-14 overall, with the 16 victories tying for the 10th  This was also the Crusaders’ 17th winning campaign in the last 19 years.  Wright State, the fifth seed, advances to Friday’s semifinals against top-seeded Green Bay. most in school history.

Game Notes: Valpo leads the all-time series 9-5, but Wright State has won four of the last five contests … the Raiders’ Thomas was named the U.S. Army Player of the Game … Launa Hochstetler finished with seven assists to move past Lisa Diefenthaler (1992-1996) on Valpo’s all-time list with 369 career helpers … Kulaga finished 11th on the career list with 256, one shy of Kathryn Knoester (2000-2004) … Hochstetler finished sixth all-time at Valpo playing in 118 career games … Litka made three three-pointers to tie Sarah Lenschow (1996-2000) for fourth place on the all-time charts with 171 career treys … Hochstetler and Kulaga finish 1-2 on Valpo’s career free throw shooting percentage list making 83.8% and 83.7% of their attempts over the last four years … Mo Drabicki (1994-1998) previously held the record at 83.0% … Litka ranks fifth on the all-time three-point percentage list shooting 36.3% for her career … Kulaga set Valpo’s single season free throw percentage record shooting 88.6% on the year … Hochstetler’s 83.9% shooting on the season ranks fifth all-time … Litka’s 66 triples on the season rank her eighth on the yearly charts … Leah Hochstetler (Berlin, Ohio/Hiland H.S.) was the fourth Crusader senior wrapping up her career on Wednesday.