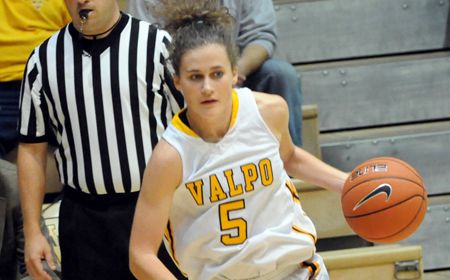 Betsy Adams (Monticello, Ind./Twin Lakes H.S.) tallied career highs with 20 points and six steals to lead four Crusaders in double figures as Valparaiso coasted to an 86-57 victory over Indiana Tech in the 2009-2010 season opener at the Athletics-Recreation Center on Saturday night.

The Crusaders poured it on in the second half, using a 20-4 run to push the lead over 30, and never looked back on the way to their second straight season-opening victory while running their win steak in home openers to five straight seasons.

“I thought we had a segment of the second half, maybe five, six minutes, where we played really good basketball,” Freeman added.

Adams made 6-of-10 three-point attempts in 29 minutes of action, the most of any Valpo player.  Lauren Kenney (Mooresville, Ind./Mooresville H.S.) added 12 points for the Brown and Gold while Sylwia Zabielewicz (Warsaw, Poland/Generala Wladyslawa Andersa H.S.) pulled down a career-best 10 rebounds while scoring seven points in just 14 minutes of action off of the bench.

“Betsy gets back and makes good choices in transition not to give up layups and got some steals today,” Freeman said.  “She’s playing better defense than she did last year.”

Valpo used its size advantage to outrebound the Warriors 44-30, grabbing 19 boards on the offensive end of the floor.

The Crusaders shot 57% from the field in the second half to finish at 45% for the game while holding Indiana Tech (0-3) to just 38% shooting on the night.

Valparaiso (1-0) will continue its season-opening three-game homestand on Wednesday evening hosting SIU Edwardsville at the ARC.  Tip-off is set for 7:05 p.m.