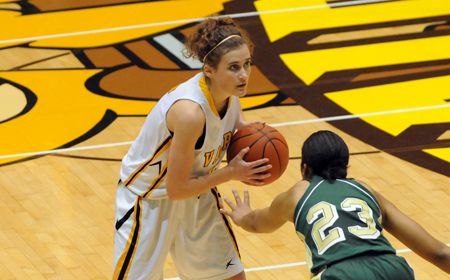 Betsy Adams had a game-high 18 points for the Crusaders. (Ray Acevedo)
Valparaiso at Chicago State | December 02, 2009

Fifteen second half turnovers by the Crusaders led to 13 points allowed the Cougars to earn the win after the game was tied at halftime.

“They were better than us tonight,” head coach Keith Freeman said. “We have to do a better job handling the ball and making better passes.”

Valpo started the game cold from the floor, making just one of its first 11 shots over the first seven minutes, falling behind 9-6.  The defense kept the Crusaders in the game though, forcing six turnovers, five on steals during the same stretch.

Chicago State answered with a 9-2 run to take a four-point advantage, but that would be the largest advantage by either team in the opening stanza and the teams went into the locker room tied at 30.

The game stayed tight throughout the opening 20 minutes, with seven ties and eight lead changes, as Valpo made just 2-of-15 three-point attempts in the half.  The Crusaders did get to the glass, grabbing eight offensive rebounds which led to nine second chance points.

The Crusaders finished the half shooting 37.5%, but forced 11 turnovers.  Chicago State was 50% from the floor, but connected on 6-of-11 from downtown as Courtney Waldon hit four triples on her way to 16 first half points.

An Adams three-point play the old-fashioned way gave Valpo a 36-35 lead with 14:12 to play in second half.

Ten turnovers in the first 10 minutes of the stanza allowed Chicago State to go on a 6-0 run over the next five-and-a-half minutes while building a 41-36 advantage.

Skyler Gick’s (Otterbein, Ind./Benton Central H.S.) triple at the 8:10 mark tied the game at 41.  After Chicago State retook a four-point lead, 51-47, with 3:01 to play, Lauren Kenney (Mooresville, Mooresville H.S.) scored back-to-back baskets inside to retie the contest with two minute to play.

Courtney Waldon answered with a triple though to put the Cougars on top for good and Chicago State made six free throws down the stretch.

Adams finished with 18 points for the Crusaders while Kenney added 11 more as both players finished in double figures for the fifth straight game.  Ashley Varner (South Bend, Ind./Washington H.S.) added 10 points and a game-high seven boards.

Alyssa Waldon led Chicago State (3-5) with 20 points while Courtney Waldon had 19 points, six boards, and three blocks for the Cougars.

“Our biggest problems tonight were turning it over 15 times in the second half, not executing on offense on about eight key possessions, not shooting the ball particularly well, and not defending to key three-point shooters all night,” Freeman concluded.

Valparaiso (3-2) will return home to the Athletics-Recreation Center on Saturday afternoon as the Crusaders host Chicago State.  Tip-off is set for 1:35 p.m. for the final home contest in the 2009 calendar year.

Game Notes: Valpo and Chicago State met for the 39th time, the most games ever for the Crusaders against a single opponent … Valpo leads the series 34-5, but Chicago State has won the last four meetings in the Windy City … the Crusaders made more free throws (12) than the Cougars attempted (11), something Valpo has accomplished for the season as well … Gick had a season-best five assists … the Crusaders had a season-high 15 steals, including four by Kelly Watts (Gary, Ind./East Chicago Central H.S.) after she had just three all season to date.