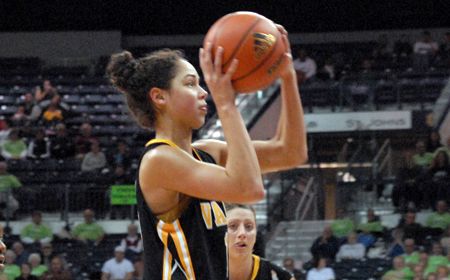 Raegan Moore (Girard, Pa./Girard H.S.) scored a career-high 20 points to pace four Crusaders in double figures, but Valparaiso came up on the short end of a 71-68 decision against Cleveland State on Saturday afternoon at the Wolstein Center in Cleveland, Ohio.

“Raegan has a lot of talent,” head coach Keith Freeman said.  “Today she showed glimpses of what she can be.  I am really proud of her defense.  When she went into the game (Kailey) Klein had 11 points, and she only finished with 18.”

Klein was a factor early, scoring 11 of Cleveland State’s first 20 points as the Vikings too a 20-14 lead just seven-and-a-half minutes into the contest.  Valpo fought back, and a triple by Betsy Adams (Monticello, Ind./Twin Lakes H.S.) tied the game at 27 with 6:27 to play in the half.

Ashley Varner (South Bend, Ind./Washington  H.S.) followed with a three of her own, to give the Crusaders the lead, and Adams second trey of the run caps Valpo’s 12-0 spurt to push the advantage to 36-27 with 4:31 to play before intermission.  The Brown and Gold started 6-of-9 from three-point range in the game.

The Crusaders eventually pushed the lead to 12, 44-32, with just under a minute to play in the half on a Moore three, but Cleveland State scored the final two baskets of the half, and Valpo took an eight-point advantage into the locker room.

“We were making shots, got the ball in the lane, and made open threes,” Freeman commented on the first half.  “It was a carry over from the second half at Youngstown.”

The Vikings came out of the locker room, cutting the Valpo advantage to five four minutes into the stanza.  A pair of Moore free throws pushed the advantage back to nine with 14:36 to play before Valpo went cold from the floor.  The Crusaders went seven minutes between field goals, and the hosts cut the lead to one, 51-50, at the 10:16 mark.

Shalonda Winton gave the Vikings the lead 54-53 with just under seven minutes to play, and an Angel Roque triple capped a 19-4 Cleveland State run, making it 59-55.

Valpo kept its deficit between four and six until the final minute when Adams hit a three with 1:08 to play to pull the Crusaders within 69-66.  After a defensive stop, Kelly Watts (Gary, Ind./East Chicago Central H.S.) scored on a lay-in with 34.4 seconds remaining to pull the Crusaders within one.  Following a timeout, Cleveland State threw the ball out of bounds, giving Valpo one final chance.

“We did a great job denying the ball inbounds twice and then they threw it away,” Freeman said.

Whitney Farris (Kokomo, Ind./Kokomo H.S.) had her shot roll out with just over 10 seconds to play and Shawnita Garland raced down floor for a lay-in with 7.7 seconds to play.  Adams had a chance to tie at the buzzer, but came up short.

“They did a good job defending,” Freeman said of Farris’ attempt.  “They took away our angle.”

After shooting 53% from the floor in the first half, the Crusaders connected on just 31% over the final 20 minutes to finish at 42% for the game.  Valpo made 8-of-13 first half threes and finished 9-of-18 for the night.

“We missed an awful lot of layups and three to four foot shots,” Freeman said.  “The biggest thing in the second half was rebounding.  They were aggressive and we seemed to be watching.”

Adams made four triples to finish with 14 points for the Brown and Gold while Watts scored 12 points and pulled down eight rebounds.  Farris scored 11 points, one off of her season-high.

Shawnita Garland led Cleveland State (9-8, 4-2 Horizon) with 24 points while Klein had six rebounds in addition to her 18 points.  The Vikings finished shooting 46% from the floor for the game.

“I’m proud of our kids,” Freeman concluded.  “We did some really good things.  We need to continue to work to improve.”

Valparaiso (5-11, 2-3) will return home to the Athletics-Recreation Center on Thursday evening as the Crusaders host Detroit.  Tip-off against the Titans is set for 7:05 p.m.

Game Notes: Valpo’s 44 first half points were them most in an opening 40 minutes this season … Moore’s previous career high was 16 points at Notre Dame … Laura Richards (Connersville, Ind./Connersville H.S.) tied a career-high with seven assists and had just one turnover … this was Cleveland State’s first home win against Valpo in nine games … the Crusaders lead the overall series 12-5.