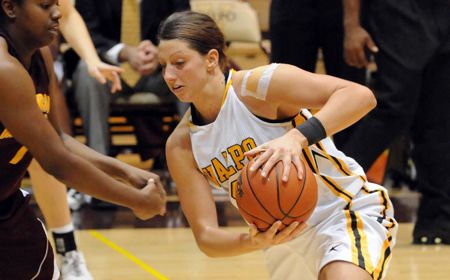 Lauren Kenney (Mooresville, Ind./Mooresville H.S.) scored a season-high 24 points and pulled down nine rebounds while Kelly Watts (Gary, Ind./East Chicago Central H.S.) added a season-high 14 points and nine boards, but it was not quite enough on Thursday evening as Valparaiso was defeated by Detroit 72-70 in overtime at the Athletics-Recreation Center.

The Titans rallied from six points down with just 38 seconds remaining to force the extra session and then scored the first seven points of overtime.

A Betsy Adams (Monticello, Ind./Twin Lakes H.S.) jumper with 38.4 seconds in regulation left put Valpo on top 64-58.  Brigid Mulroy answered for the Titans with 28.7 seconds remaining before Laura Richards (Connersville, Ind./Connersville H.S.) split a pair of free throws for the Brown and Gold.

Sierra Spaude hit a triple with 22.6 seconds to play, and following a Crusader turnover, Yar Shayok tied the game with a lay-in with 15 seconds remaining.  Each team traded turnovers in the final seconds and the game went to overtime.

“Unfortunately we turned the ball over too much down the stretch,” head coach Keith Freeman said.  “They had us in deadball situations and we were playing with two freshmen and a sophomore on the floor.  It’s a challenge.”

In the overtime, Demeisha Fambro opened the scoring with a three-pointer for Detroit (7-10, 5-1 Horizon) and followed with a jumper on the following possession.  A Lauren Allen layup with 2:27 to play put Detroit up 72-65 before Valpo tried to rally. Whitney Farris (Kokomo, Ind./Kokomo H.S.) drilled a triple with 1:33 to play and after a defensive stop, Kenney scored inside with 38.8 seconds to play.  Valpo forced a miss by Detroit, but an offensive rebound forced Valpo to foul with 2.8 seconds to play.  Despite a miss by the Titans, Valpo could not get off a final shot attempt.

After Valpo fell behind early 13-6, six quick points brought the Crusaders within one, and the two teams battled back-and-forth the rest of the half, with the lead changing hands 13 times in the first 20 minutes.  A late 7-0 run by the crusaders, keyed by an Adams triple and four points from Kenney allowed Valpo to take a 35-30 lead into the locker room.

“We did not defend them well in the second half,” Freeman added.  “We can’t let teams shoot 48% like they did both halves.”

Adams finished with 12 points while Farris added 10 for the Crusaders as Valpo put four players in double figures for the second straight game.  Mulroy led Detroit with 19 points while Fambro added 15 off of the bench for the Titans.  Shayok and Allen each had 10 points as well for the visitors.

“We have to get tougher defensively if we want to be a championship team,” Freeman concluded.

Game Notes: Valpo had won five straight overtime games prior to Thursday night … Detroit leads the all-time series 5-4 … Raegan Moore (Girard, Pa./Girard H.S.) and Richards each pulled down a career-high eight rebounds … this was the first time this season Valpo had back-to-back games with four double figure scorers … Kenney made her first eight shots from the floor and finished 10-of-13 … Valpo outrebounded Detroit 48-35, including a 19-8 advantage on the offensive end.