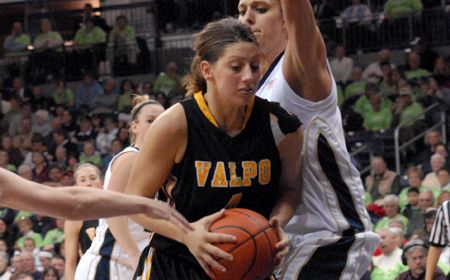 Kenney tied a career-high with 26 points, 21 in the second half, while grabbing 13 rebounds.  Watts tallied 12 points, eight in the first half, and pulled down 11 boards.

“Kenney and Watts did a good job scoring inside and rebounding well,” head coach Keith Freeman said.  “Offensively we didn’t have effective movement or screens though, and it took us a long time to get into the game.”

The Crusaders struggled shooting the ball, connecting on just 30% of its tries from the floor, including just 22% in the opening half.  Valpo went 0-for-16 from three-point range, scoring all but two of its points either in the paint or at the free throw line.

Valpo opened up missing its first 12 shots, being held scoreless for six minutes, but the defense kept the Brown and Gold in the game, as the Crusaders trailed just 4-0.  Trailing 8-2, Valpo cut the lead to two, 10-8, at the 9:14 mark following back-to-back baskets by Watts.

After the Panthers pushed the lead back to seven, Watts answered with two more hoops to bring Valpo within 15-12 with 7:10 to play before intermission.

The Crusaders would not score from the floor again for nearly seven minutes, as Milwaukee opened up a 10-point advantage before a Kenney cut the lead to eight at the break, 23-15.

“In the first half we missed a lot of easy shots,” Freeman added.

A Kenney three-point play followed by a full-court press steal and lay-in by Laura Richards (Connersville, Ind./Connersville H.S.) pulled Valpo within four, 38-34, with 6:58 to play, capping a 9-0 Crusader run.

Milwaukee scored the next five points to push the lead back to nine, before Watts and Kenney scored inside to pull within five, 47-42, with 1:17 to play.

The Panthers made 12 straight free throws down the stretch to offset the fact they made just one field goal in the final 11:11 to secure the victory.

Valparaiso (6-13, 3-5) will wrap up the first half of Horizon League play on Saturday afternoon, staying in the state of Wisconsin to face #24/22 Green Bay.  Tip-off is slated for 7 p.m.

Game Notes: Milwaukee leads the all-time series 9-4 … Valpo committed just two second half turnovers and 11 total for the game … the Panthers became just the second Horizon League team to outrebound Valpo, doing so 40-37 … eight of Kenney’s 13 boards were offensive … Kenney’s double-double was her fourth of the year while Watts’ was her second … Kenney tied a career-high with four steals.