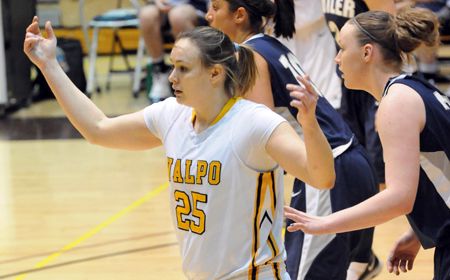 Valparaiso rallied from 17 points down with 8:46 to play, cutting the deficit to one in the final minute, but could not complete the comeback, falling to Wright State 54-51 on Thursday evening at the Ervin J. Nutter Center in Dayton, Ohio.

The Crusaders fell behind 46-29 with 8:46 to play before trying to claw back.  Six straight points in just over a minute, four by Gick, brought Valpo within 46-35 as the Crusaders extended the defensive pressure full court.

Kanisha Ward, who led the Raiders with 16 points, slowed the run momentarily with a triple to push the lead back to 14 with just over seven minutes to play.

“They made some tough shots at the end of the shot clocks tonight,” Freeman added.

Valpo continued to work, and a triple by Farris with 3:24 to play pulled the Crusaders within single digits for the first time since intermission, 51-44.  A 10-footer in the lane by Gick followed by a turnover and score from Farris made it 51-48 at the 2:33 mark.

Another forced turnover allowed Gina Lange (Forest Lake, Minn./Forest Lake H.S.) to knock one in off the window with 1:11 to play, making it a one-point deficit for the Brown and Gold, capping a 21-5 Valpo run.

“The group we had on the floor at the end of the game really competed hard,” Freeman said.  “We turned them over a lot and it created scoring opportunities.  I was really proud of how hard we played.”

Valpo forced a defensive stop and had a chance to tie in the final 20 seconds, but Wright State blocked the shot and made two free throws with 7.7 seconds to play.  Gick was fouled with 5.2 seconds remaining and split a pair of free throws.  Molly Fox made one of two at the other end with 2.4 seconds to play, and Valpo’s half court heave at the buzzer came up short.

Valpo’s defense forced turnovers on Wright State’s first two possessions of the game, turning them into a quick 4-0 Crusader lead.

With Valpo up 6-2, the Raiders scored 12 unanswered points over a six minute span to build a 14-6 lead at the 12:13 mark.  The Crusader defense stiffened once again, holding the hosts scoreless for 5:30, closing the gap to within two following a jumper by Farris.

Valpo was still within three, 21-18, with 1:20 to play before intermission, but two triples by the Raiders, including one by Maria Bennett as time expired, gave Wright State a 27-18 halftime lead.

“At the end of the first half we had two opportunities we botched and gave up a three at the buzzer,” said Freeman.

Both teams committed 13 first half turnovers but the Raiders shot 44% from the floor, including 5-of-11 from three-point range.  Valpo did grab seven offensive rebounds, but was only able to convert them into two second chance points.

The Raiders scored the first seven points of the second half, building the advantage to 34-18 before Kelly Peller (Chesterton, Ind./Chesterton H.S.) scored Valpo’s first points of the second  half at the 14:40 mark.  Farris followed with a three, but Wright State pushed the lead out to 17 before the Crusaders made their late run.

Valpo finished the game forcing 27 Wright State (9-15, 5-9 Horizon) turnovers, converting them into 26 Crusader points.  The Raiders did shoot 45.5% from the floor though while holding Valpo to just 34.6%.

Valparaiso (7-17, 4-9) will close out its road trip on Saturday afternoon in the Motor City taking on Detroit.  Tip-off against the Titans is set for 12 p.m. CST at Calihan Hall.