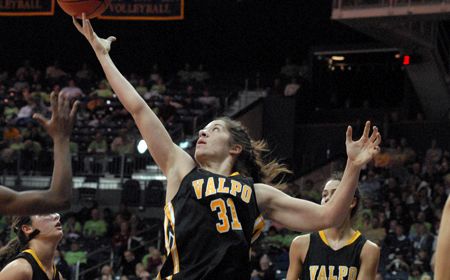 Valparaiso scored the first 12 points of the game on Tuesday evening and never looked back, on its way to a 70-46 victory over Grace at the Athletics-Recreation Center in the first exhibition game of the season for the Crusaders.

“This team has great chemistry and works hard at getting better every day,” head coach Keith Freeman said after the game.  “We have a lot of freshmen that were playing tonight and we did some good things.”

The Crusaders jumped out to the early lead, holding the Lancers scoreless for nearly nine minutes.  A jumper by Maegan Callaway (Mooresville, Ind./Mooresville H.S.) increased the lead to 19-5 before Grace scored five straight points to cut the Valpo advantage to single digits for the only time.

Callaway added four points sandwiched around a Rashida Ray (Fort Wayne, Ind./Harding H.S.) triple to push the lead back to 16 before Valpo took a 30-18 edge into the locker room.

A 10-0 Valpo spurt midway through the second half increased the advantage to 26, 54-28, and the Crusaders never looked back.

Valpo shot 41.8% from the floor for the game and 35% from three-point range, committing just 12 turnovers offensively.

“We didn’t shoot as well as I’d have liked us to, but part of that is that we are trying to figure out what to look for offensively,” Freeman added.  “Our posts can all shot, but they need to learn to be more active.”

Valpo held Grace to just 31.5% shooting and forced 20 turnovers, converting the miscues into 21 points.  The Crusaders outscored the Lancers 34-10 in the paint.

“We did a good job taking away their low post game,” Freeman concluded.

Valparaiso will close out exhibition play on Saturday afternoon, hosting Lewis. Tip-off is set for 1:30 p.m. at the ARC.