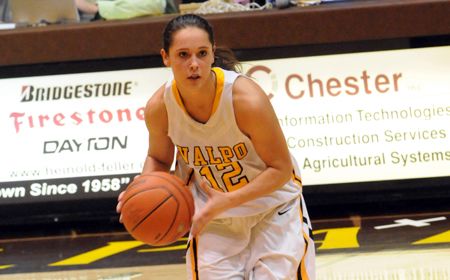 Freshman Tabitha Gerardot (Fort Wayne, Ind./Canterbury H.S.) tallied a double-double with 14 points and 16 rebounds on Saturday afternoon as Valparaiso closed its exhibition play with a 64-44 victory over Lewis at the Athletics-Recreation Center.

Gerardot went 9-of-11 from the free throw line and grabbed seven offensive rebounds in 27 minutes of action.

Laura Richards (Connersville, Ind./Connersville H.S.) also had 14 points for the Crusaders while pulling down seven boards and dishing out four assists.

Lewis led for most of the first 12 minutes of the game before Valpo took the lead for good on a traditional three-point play with 7:55 to play.  The Crusaders extended their lead to 31-26 at intermission.

“We were weak in our transition defense early, allowing them to get some good looks at the basket,” head coach Keith Freeman said.  “We also have to do a better job boxing out.  We gave up too many offensive rebounds (17) today.”

Eleven straight points early in the second half allowed Valpo to pull away, as the Brown and Gold built a 42-28 lead following a Stefanie Lang (Valparaiso, Ind./Valparaiso H.S.) jumper with 10:39 to play.  The 11 straight points were part of an 18-1 Crusader run in which Valpo extended the lead to 49-29 with just over eight minutes to play and the Crusaders never looked back.

Valpo shot just 36.4% from the floor and only 21.4% from three-point range.  The Crusaders did outrebound Lewis 56-37 though and forced 17 turnovers.

Lang had nine points and eight rebounds for the Crusaders in just 14 minutes of action.

Jenny Turpel led Lewis with 13 points and seven rebounds as the Flyers shot just 22.6% from the floor, including 19.2% from long range.

“I thought our defense really got better as the game wore on,” Freeman added.  “Our interior defense really stepped up and made it hard for Lewis to score in the paint.  We did a great job putting Lewis in position to have to make tough shots.”

Valparaiso will open the regular season on Friday evening as the Crusaders head to Chicago, Ill. for the first round of the Preseason WNIT.  The Crusaders will battle DePaul with tip-off set for 7 p.m.