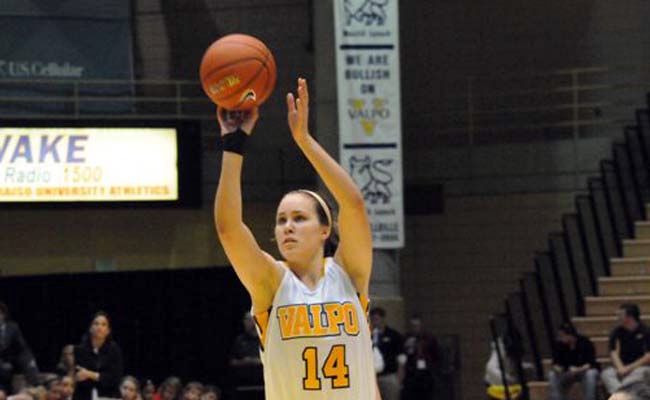 Betsy Adams (Monticello, Ind./Twin Lakes H.S.) led Valparaiso with 15 points and two freshmen added 10 points a piece but DePaul used its speed and athleticism to defeat the Crusaders 84-53 on Friday evening in the first round of the Preseason WNIT and season opener for both schools at McGrath Arena in Chicago, Ill.

Adams scored all 15 of her points in the first half on five three-pointers while Tabitha Gerardot (Fort Wayne, Ind./Canterbury H.S.) and Stefanie Lang (Valparaiso, Ind./Valparaiso H.S.) both added 10 points a piece in their collegiate debuts.

“I thought this was a good learning experience for our kids today,” head coach Keith Freeman said.  “They play at a tempo that is hard to manage when you can’t simulate it.  We had freshmen on the floor for 70 of 200 minutes tonight.”

The Crusaders committed 31 turnovers though, 19 on Blue Demon steals, which led to 38 DePaul points.

“The difference in the game was the number of turnovers that we committed with their size and athleticism,” Freeman added.  “We didn’t handle the ball the way we needed to.”

DePaul (1-0) jumped out to a 25-8 lead just nine minutes into the game before Valpo settled down and got its offense going.  Adams drained three triples as part of an 11-0 run, pulling the Crusaders within 25-19 at the 8:46 mark.

Valpo kept the deficit around 8-12 points the rest of the half before heading into the locker room trailing 43-31.

“We did a good job of getting ourselves into a position where it was 12 points at halftime,” Freeman added.

The Blue Demons scored the first five points of the second half and the Crusaders were unable to cut the deficit under 13 the rest of the way.  Valpo fell behind by 22, 64-42 before scoring seven straight points to pull within 15 with eight minutes to play, but DePaul pulled away down the stretch.

Keisha Hampton led DePaul with 27 points, 24 of which came in the first half while Felicia Chester added 18 points and a game-high 10 rebounds.

DePaul shot 42% from the floor compared with Valpo’s 36%.

Valparaiso (0-1) will return to action in the consolation round of the WNIT next Friday and Saturday.  The pairings and sites for those rounds will be determined by Sunday.

Game Notes: Gerardot was the true freshman in four seasons to start the season opener for the Crusaders … Valpo is now 12-27 all-time in season openers … DePaul leads the all-time series 17-0 … Gerardot was 5-of-7 from the floor … this is Valpo’s second appearance in the WNIT (1998) … Gick’s seven assists were a career high … Gina  Lange (Wyoming, Minn./Forest Lake H.S.) made her first collegiate start.