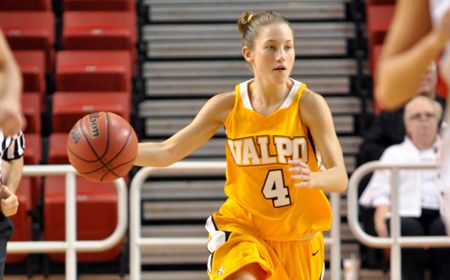 Led by 20 points from Betsy Adams (Monticello, Ind./Twin Lakes H.S.) and 16 more from Ashley Timmerman (Pontiac, Ill./Pontiac H.S.), Valparaiso earned its first victory of the season on Friday evening, defeating Austin Peay 72-57 in the consolation round of the Preseason WNIT held in Beaumont, Texas.

“For us to get a win against a team that went to the NCAA Tournament last year is great for our young kids,” head coach Keith Freeman said.  “Playing with as many freshmen and newcomers as we have, we are going to learn something from every game, win or lose.”

Adams scored 15 points in the second half as the Crusaders took control after leading 34-30 at the break.

A 9-2 Valpo run, capped by back-to-back trips from Timmerman, pushed the lead to nine and the Crusaders never looked back, slowly extending its advantage the final margin of 15 points.

“Timmy’s production off of the bench gave us a boost today with her efficient play,” Freeman added.

An Adams three two minutes into the game gave Valpo a 5-2 advantage, its first lead of the 2010-2011 season.  After Austin Peay tied the game at seven, the Crusaders went on a 10-1 run, and maintained a five to nine point advantage until the final four minutes of the half.

“Betsy Adams made big plays for us today when the game could have gone either way,” said Freeman.  “She’s our leader and needs to be the one stepping up for us.”

Adams finished the night as the game’s high scorer, making 7-of-13 from the floor.  Timmerman connected on 6-of-11 as Valpo shot 44.1% from the field in the contest.

Gerardot led the Crusaders on the boards with eight while Timmerman pulled down seven more.  Austin Peay had a 40-36 rebounding edge though, and the Lady Govs grabbed 18 rebounds on the offensive end.

Valpo forced 21 turnovers from the Lady Govs, including four steals by Laura Richards (Connersville, Ind./Connersville H.S.), part of 11 Crusader thefts on the night.

Valparaiso (1-1) returns to action in Beaumont on Saturday afternoon when the Crusaders face the winner of Friday night’s second contest between host Lamar and Utah Valley.  Tip-off is set for 3 p.m.

Game Notes: Valpo leads the all-time series 3-0 against Austin Peay … the win was the first ever for the Crusaders in the Preseason WNIT … the win for Coach Freeman was number 399 in his career … freshman Maegan Callaway (Mooresville, Ind./Mooresville H.S.) scored seven points in 12 minutes of action.