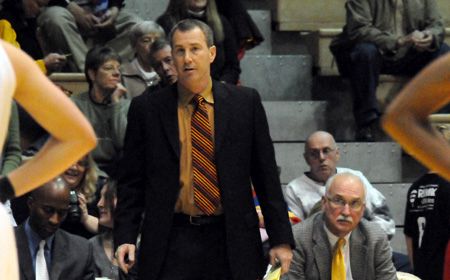 It took an extra five minutes of basketball on Saturday afternoon, but it was worth it in the end for Valparaiso head coach Keith Freeman as he earned his 400th career win coaching women’s basketball as the Crusaders defeated Coastal Carolina 59-54 in overtime in the consolation game of the Aces Classic held at Roberts Stadium in Evansville, Ind.

“I think of the number of players I have had the opportunity to coach,” Freeman said after the win.  “It has always been the players and the coaches that I have had on my staff.  I have been fortunate to have been surrounded by such great people.”

Ashley Timmerman (Pontiac, Ill./Pontiac H.S.) scored seven of her 14 points in the extra session and Rashida Ray (Fort Wayne, Ind./Harding H.S.) scored all five of her points in overtime as Valpo overcame a nine-point second half to earn the win.

“Rashida Ray came up bit in overtime with a backdoor layup and hit a big jump shot,” Freeman said.  “Timmy made her free throws down the stretch.”

The Crusaders earned the win despite going the first 10 minutes of the second half without scoring and shooting just 27.6% from the floor for the game, including just 15.4% over the second 20 minutes.

“We’ve got some gritty kids, Freeman added.  “They logged some heavy minutes and played two tough games within 15 hours.”

Betsy Adams (Monticello, Ind./Twin Lakes H.S.) led Valpo with 15 points and seven rebounds, the sixth time this season the junior has tallied 15 or more points in a game.  She was named to the All-Tournament Team for her efforts on the weekend.

Both team started the game slowing offensively before the Crusaders went on an 8-0 run midway through the half to take a 15-10 lead.  The Chanticleers answered with back-to-back three-pointers to retake the lead

Coastal Carolina’s defense held Valpo without a field goal for nearly seven minutes before Gina Lange (Wyoming, Minn./Forest Lake H.S.) scored down low.  Valpo hung in the game at the free throw line though, making nine straight during the scoring drought from the floor.

Adams, who scored 11 first half points, hit two three-pointers late in the first half to extend Valpo’s advantage to 30-22, the largest lead of the first half for either school before Coastal Carolina closed with five straight points, pulling the Chanticleers within 30-27 at intermission.

Valparaiso could not find the basket to start the second half, missing its first 12 shots from the floor and committing six turnovers over the first 9:53 as the Chanticleers scored the first 12 points of the half to build a 39-30 lead.

A Gerardot three-pointer ended the Crusaders’ scoreless stretch.  The freshman then scored eight of Valpo’s first 10 points of the second half to pull Valpo close.  A Timmerman three at the 6:36 mark capped an 8-0 Crusader run, and gave Valpo the lead back 43-42.

“We were in a bad position late in the game and our kids fought way back,” Freeman said.  “I’m proud of the kids.”

The Crusaders would go scoreless for the three-and-a-half minutes before a pair of Adams free throws with 2:57 to play gave Valpo a 45-44 lead.  Coastal Carolina managed just one free throw the rest of the way though, and the Crusaders could not score again in regulation after making just 4-of-26 field goals in the half, and the teams went to overtime tied at 45.  The Chanticleers managed just one field goal in the final 9:14 of regulation as well, while shooting just 28.4% for the game.

After Coastal Carolina scored first in the extra session, Ray answered with back-to-back baskets, giving the Crusaders a 49-47 advantage which they would not relinquish.  Timmerman followed with a three-pointer, pushing the lead to five.  After a Chanticleer basket, Adams scored on a backdoor feed from Laura Richards (Connersville, Ind./Connersville H.S.), one of a career-high eight assists for the sophomore.  Valpo then made five of six free throws down the stretch to secure the win.

“In the overtime we executed really well,” Freeman added.  “We nearly scored as many points as we did the entire second half.  When we needed a basket, we came down and executed multiple times.”

Valparaiso (2-5) wraps up its three-game road trip on Wednesday even as the Crusaders head east to Fort Wayne, Ind. to battle IPFW.  Tip-off is slated for 7 p.m. CST at Memorial Coliseum.

Game Notes: This was the first time Valpo ever faced a team from the Big South Conference … Richards’ previous career high for assists was seven … Adams averaged 18.5 points and 7.5 rebounds in the tournament while Gerardot averaged 15 points and 13 boards … there were 11 lead changes in the game … Freeman now has a 400-254 career record coaching women’s basketball, including a 271-207 mark at Valpo.