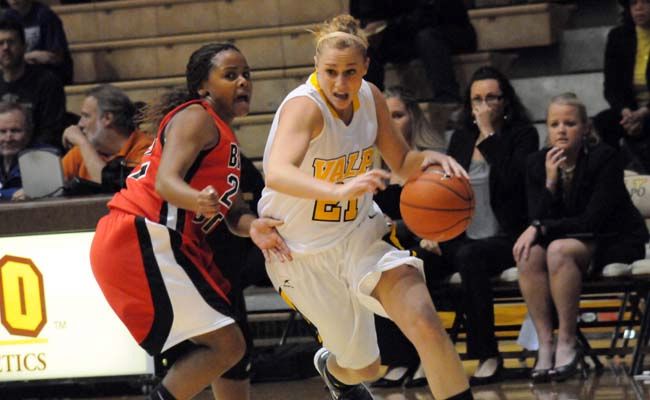 Valparaiso rallied from 20 points down with seven minutes to play and closed within four in the final minute, but IPFW made four free throws in the final 22.5 seconds to secure a 73-65 victory over the Crusaders on Wednesday evening at Memorial Coliseum in Fort Wayne, Ind.

“We battled at the end,” head coach Keith Freeman said.  “We were way down and the kids out there battled.”

Ashley Timmerman (Pontiac, Ill./Pontiac H.S.) scored 17 of her career high 19 points in the second half, making 5-of-6 three-pointers, most during the closing run.

“She worked to get open to get her shots, got her shots, and made the shots,” Freeman said.

The Crusaders answered with a 9-2 run of their own, making four straight shots from the floor.  A Betsy Adams (Monticello, Ind./Twin Lakes H.S.) three-pointer at the 11:32 mark pulled Valpo within 15-11.

IPFW held Valpo scoreless the final 6:32 of the first half though, closing the half on a 9-0 run to take a 29-17 lead into the locker room.  Valpo committed 14 turnovers in the first half while attempting just 18 shots from the field.

“We’re much better than we played in that first half,” Freeman added.  “We turned the ball over on five of our first seven possessions.”

The Mastodons extended the lead to 36-20 right out of the break before a Skyler Gick (Otterbein, Ind./Benton Central H.S.) three-point play pulled Valpo within 13.

IPFW extended the lead back out to 20, 56-36, with seven minutes to play, converting at the free throw line.  The Mastodons made 11-of-12 over a 10 minutes span from the charity stripe.

Valpo then tried to rally.  Down 18 at the six minute mark, Timmerman made a pair of three-pointers to jump start a 12-3 run to cut the lead to single digits.  A three-pointer from Tabitha Gerardot (Fort Wayne, Ind./Canterbury H.S.) and free throw by the freshman as well made it 63-54 with 3:14 to play.

After the Mastodons pushed the lead back to 12, Adams scored on a driving lay-up, and a steal by Laura Richards (Connersville, Ind./Connersville H.S.) allowed her  to dish to Timmerman in the lane to cut the deficit to eight.  After another IFPW turnover, Richards made two free throws to make it 66-60 with two minutes remaining.

A three-point play by Stephanie Rosado pushed the lead back to nine before Timmerman drained her fifth three of the half.  IPFW then turned the ball over again and Adams was fouled, converting two free throws with 1:12 to play, making it 69-65 with 1:12 to play.

The Crusaders got a steal by Richards and a chance to cut further into the lead, but a miss forced Valpo to foul and Jordan Zuppe made four free throws down the stretch to secure the win for the Mastodons.

“Unfortunately the last five minutes don’t matter as much if we don’t play the first 35,” Freeman added.

Timmerman led Valpo with her 19 points, making 7-of-8 overall from the floor.  Adams and Gerardot both added 13 points for the Crusaders, as Valpo went 8-of-11 from three-point range in the second half as a team.

The Crusaders finished the game with 20 turnovers leading to 27 Mastodon points and were outrebounded 29-20, including 11-4 on the offensive end.

“I’m disappointed that we turned the ball over as much as we did,” Freeman concluded.  “There was a 28 point differential between us and them combined between points of turnovers and second chance points.”

Valparaiso (2-6) will return home to the Athletics-Recreation Center on Saturday afternoon to begin a three-game homestand.  The Crusaders will host Big East foe Pittsburgh beginning at 1:35 p.m.

Game Notes: Timmerman’s previous career high was 16 points against Austin Peay … Adams has tallied double figures in seven of the eight games this year … Adams played all 40 minutes on Wednesday night … Gerardot finished with her 13 points on 4-of-9 shooting, had three rebounds and a block in 30 minutes in her return to her hometown … Rashida Ray (Fort Wayne, Ind./Harding H.S.) made her final appearance in her hometown, started, and had two rebounds, two assists and a steal in 16 minutes of  action … Valpo finished the game 9-of-19 from three-point range … the Crusaders lead the all-time series 8-5 but the Mastodons snapped Valpo’s four-game winning streak in the series … IPFW’s last win over Valpo came Jan. 19, 1984.