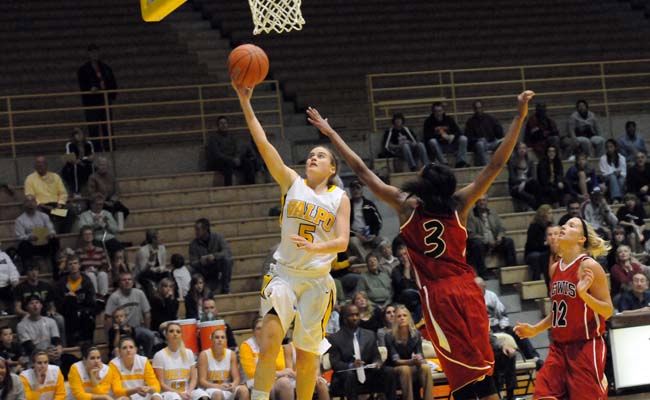 Four lengthy scoring droughts by Valparaiso proved to be the difference on Sunday afternoon as Butler defeated the Crusaders 61-49 at Hinkle Fieldhouse in Indianapolis, Ind. in the Horizon League opener for both schools.

Four times Valpo went four minutes or longer without a basket from the floor, the longest for nearly eight minutes and the Crusaders shot just 32.1% from the floor for the day.

“Their defense is very good and very solid,” head coach Keith Freeman said.  “They made it tough to get the type of shots we want to get.  We had a good nucleus of players playing hard though in a physical game.”

Valpo jumped on top early, taking an 8-3 lead as the Bulldogs were just one-of-six from the floor over the first five-and-a-half minutes of the contest.

The Bulldogs tied the game at 10 before the Crusaders retook the lead with the next four points.  All five of the Valpo starters had found the scorebook in the first nine minutes for Valpo, accounting for the first 12 points for the Brown and Gold.

A 6-0 Butler run put the Bulldogs in front 16-14 at the 8:33 mark, their first lead since 1-0.  Valpo tied the game at 16 before Brittany Bowen scored the next 10 Bulldog points, building a 26-22 lead for the hosts.  Valpo’s offense went quiet late in the half, as the Crusaders were unable to score from the floor over the final 5:10 of the stanza, and trailed at halftime 28-24.

Valpo shot just 29.6% from the floor in the opening 20 minutes, but forced 10 first half turnovers from Butler though to stay in the game.

“We missed a lot of open shots and had too many segments without scoring,” Freeman said.

Betsy Adams (Monticello, Ind./Twin Lakes H.S.) made a three-pointer to start the scoring in the second half, and Valpo’s first triple of the game after 10 misses from long range.  She followed with a driving lay-in to put the Crusaders on top 29-28 just over two minutes into the period.

Butler answered with four straight points to take the lead for good.  Trailing 32-30 at the 16:25 mark, the Crusaders went nearly eight minutes without a field goal as the Bulldogs used a 10-0 run to open up a double digit advantage.  Valpo started the second half just 2-of-13 from the floor.

“It was a grind it out game,” Freeman said.  “We just missed some open shots to begin the second half.”

Another four minute stretch without a field goal allowed Butler to extend the lead to 55-41, and the Crusaders did not pull within 10 until the final minute on an Ashley Timmerman (Pontiac, Ill./Pontiac H.S.) triple to make it 58-49.

Bowen led Butler (7-6, 1-0) with a game-high 18 points and 10 boards while Chloe Hamilton added 12 points.  Sarah Hamm came off the bench to contribute 10 more points for the Bulldogs.

Butler finished the game with 18 turnovers but shot 39.2% from the floor and made 15-of-20 free throws.  Valpo committed just 13 miscues.

“We did a pretty good job of guarding them,” Freeman added.  “We didn’t rebound as well as we needed to.  We handled the ball well today, and that was a positive winning the points off of turnovers.

Valparaiso (3-10, 0-1) continues its road trip on Thursday evening, heading to Calihan Hall in Detroit, Mich.  Tip off against the Titans of Detroit is set for 6 p.m. CST.

“This league is very, very good this year,” Freeman concluded.  “It is as deep as it has ever been.”

Game Notes: Valpo is now 2-2 all-time in Horizon League openers … the first half was the first time this season the Crusaders did not make a three-pointer in a half … Adams now has 109 three-pointers, 10 shy of the Crusaders’ all-time three-point list … Timmerman made two free throws and is now 13-for-13 on the season from the stripe … Valpo’s 13 turnovers were the second fewest committed this season … Butler leads the all-time series 19-5 and has won three straight meetings.