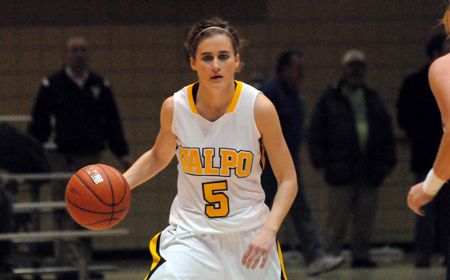 Betsy Adams (Monticello, Ind./Twin Lakes H.S.) scored 19 of her 21 points in the second half, but a 14-0 run by Wright State midway through the final 20 minutes broke the game open as the Raiders defeated the Crusaders 90-67 at the Nutter Center in Dayton, Ohio on Saturday afternoon.

The Crusader defense allowed the Raiders to connect on 13 three-pointers, including eight in the second half as Wright State shot 51.5% from the floor and 52.0% from long range in the game.

Valpo hung in the game early.  The game changed hands five times and was tied three others before Valpo took an 11-9 lead at the 13:35 mark.  Tabitha Gerardot (Fort Wayne, Ind./Canterbury H.S.) collected her fifth offensive rebound in the first seven minutes and hit a jumper from 12 feet in the lane.

“It’s the same old story,” head coach Keith Freeman said.  “We played 8-10 minutes to start the game at high intensity and got the shots we wanted.  The game resembled what it should.”

Wright State answered with a 12-0 run as a trio of players did all of the damage.  LaShawna Thomas, who had 14 first half points, Molly Fox, and Maria Bennett accounted for the first 26 Raider points.

“We just have a hard time with shot selection and that led to transition buckets,” Freeman added.

The hosts made nine of their first 15 shots from the floor, including 6-of-8 inside the arc while Valpo made just six of its first 23 attempts from the field.

Trailing 28-15 with 6:15 to play, the Crusaders fought back.  Gerardot, who finished the first half with 11 points and seven boards, scored down low with 15 seconds to play before intermission, pulling Valpo within 36-29.  However, Bennett’s third triple of the stanza as time expired gave Wright State a 10-point halftime advantage.

Adams tried single handedly to keep Valpo in the game offensively in the second half.  She hit a pair of triples and added a conventional three-point play to pull the Crusaders within seven, 45-38 at the 17:12 mark.

Fox answered inside for the Raiders, scoring eight of Wright State’s first 10 second half points.  With Valpo within seven, the hosts went on a 28-10 run, including a 14-0 spurt over three minutes to take a 73-48 lead and put the game out of reach.

Adams continued to provide Valpo’s offense, scoring 19 of its first 21 points in the stanza before coming out of the game.

“In the second half we did a pretty good job offensively to start,” Freeman said.  “Betsy scored quite a few points in a four minute span but we didn’t do anything defensively to take away their stuff.”

Gerardot finished the game with 13 points and nine rebounds, one shy of her sixth double-double of the season.  Gina Lange (Wyoming, Minn./Forest Lake H.S.) added 11 points and six boards.

“We didn’t do a good job guarding Bennett,” Freeman added.  “Thomas hurt us on penetration and Fox hurt us inside.  We didn’t take anything away from them.”

Valparaiso (3-12, 0-3) returns to the Athletics-Recreation Center for the first time since Dec. 20 on Thursday evening as the Crusaders host Youngstown State.  Tip-off is set for 7:05 p.m. against the Penguins.

Game Notes: Ashley Timmerman (Pontiac, Ill./Pontiac H.S.) made her first start at Valpo against  the Raiders … this was the first time the Crusaders had changed their starting lineup since opening  night … Valpo committed 13 turnovers in the game while Wright State had just 10 … Stephanie Thomas (Avon, Ind./Avon H.S.) tied a career high with four points and had a career best five rebounds … Valpo went 10-of-11 from the free throw line … the Crusaders had 18 offensive boards, including six by Gerardot, but just 12 second chance points … Valpo leads the all-time series 10-7 but Wright State has won two straight meetings.