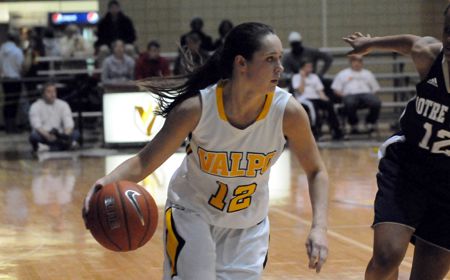 Four players scored in double figures and Valparaiso got several key defensive stops on Saturday afternoon as the Crusaders earned their first Horizon League victory of the season on Saturday afternoon, defeating Loyola (Chicago) 65-58 at the Joseph G. Gentile Center in Chicago, Ill.

“We put together a good solid effort today,” head coach Keith Freeman said.  “We got a lot of production offensive from a lot of different people and had a collective defensive effort.  We worked hard as a team.”

Betsy Adams (Monticello, Ind./Twin Lakes H.S.) had two key plays late in the second half, a steal followed by a layup and a three-pointer in the final minute, to offset an off-shooting game from the floor.  The defense stepped up late as well, never surrendering the lead in the final 32 minutes even though the Ramblers cut the Valpo advantage to one seven times.

Laura Richards (Connersville, Ind./Connersville H.S.) got the Crusaders started offensively, scoring five straight points to give Valpo its first lead of the game, 8-6, four minutes into the contest.

The Crusaders then went into a four minute scoring drought, only to have the defense step up and keep the Crusaders in the game.  An Ashley Timmerman (Pontiac, Ill./Pontiac H.S.) three-point put the Crusaders back on top, 11-10, a lead Valpo would never give up.

Rashida, Laura, and Betsy did a good job communicating on defense today,” Freeman commented.  “Lots of people then stepped up and scored as well.”

Back-to-back triples by Rashida Ray (Fort Wayne, Ind./Harding H.S.) and Timmerman increased the lead to six as the Crusaders started the game five-of-nine from beyond the arc.

Another 3:30 scoring drought by the Crusaders was ended by another Timmerman three, making it 20-16 with seven minutes to play.

Maegan Callaway (Mooresville, Ind./Mooresville H.S.) added a three-point play inside with three minutes to play before break increasing the lead to six and the Crusaders ended up taking a 29-24 lead into the locker room.

Adams scored four straight out of halftime as the Crusaders tallied seven of the first nine points of the second half to build a 10-point advantage, Valpo’s largest of the game to that point.

Loyola answered with an 11-2 run, pulling within one, 38-37 with 13:07 to play in the game.  The Ramblers had missed their first nine three-point attempts prior to a Monica Albano triple late in the run.

Four more times during the second half the hosts would pull within one, but each time the Crusaders had an answer.  Leading by two, 50-48, with just under seven minutes to play, Adams registered a steal and score that jump-started the offense again.  A 9-0 run put the Brown and Gold on top 59-48 with 4:10 to play.

The Ramblers cut the Crusader lead down to two, 60-58, with 52.4 seconds to play after scoring seven straight points in less than a minute.

With the shot clock expiring, Adams drained her only triple of the game with 20.9 seconds to play, pushing the lead back to five and Tabitha Gerardot (Fort Wayne, Ind./Canterbury H.S.) added to free throws to help snap Valpo’s six-game losing skid as the Crusaders earned their first win in 2011.

“We could have folded at the end but our kids stepped up,” Freeman said.  “We had lots of positives.  We were able to hold them under 60 and that is a key number for us.”

Gerardot led the Crusaders offensively with 14 points and nine rebounds while Adams, Timmerman, and Richards each added 11 points.  Richards matched her career high at Valpo with her 11 points while Callaway also tied her career high with seven more.

“Tabitha and Maegan helped us offensively inside,” Freeman added.  We got to the line 19 times, including 16 in the second half.  We got the ball in the lane more and were able to do something with it.”

Valpo outrebounded the Ramblers 40-37, and capitalized on 13 Loyola turnovers by scoring 16 points off of them.  The Crusaders turned the ball over just 12 times on the afternoon.

Valparaiso (4-15, 1-6) returns home to the Athletics-Recreation Center on Thursday evening to begin a four-game homestand.  Tip-off against Milwaukee is set for 7:05 p.m.

Game Notes: Richards had scored just two points in her last five games total before scoring 11 on Saturday … Gerardot led Valpo in scoring for the fourth time this season … the freshman has also had eight or more rebounds now in 10 of 19 games … Valpo has held its opponents below 60 points in all four wins this year … Valpo is now 16-2 all-time against Loyola and 8-2 against the Ramblers in Chicago.