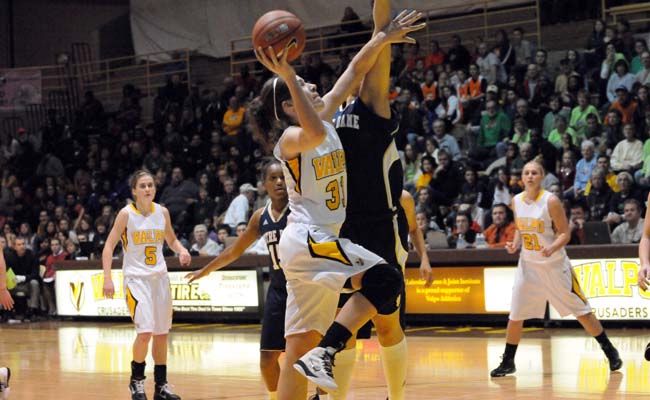 Valparaiso used solid defense and rebounding to start the second half of the Horizon League schedule in a positive manner on Thursday evening as the Crusaders defeated Wright State 73-64 at the Athletics-Recreation Center for the Brown and Gold’s first home victory of the season.

The Crusaders also atoned for a 23-point loss to the Raiders earlier this season in Dayton, a game in which Valpo allowed 90 points.

“I was really pleased with our focus and the contributions from everyone on the floor tonight,” head coach Keith Freeman said.  “We had lots of positive energy from everyone.”

Valpo’s defense was stingy, especially in the first half, allowing just 18 Wright State points before intermission.  Leading 8-7 six minutes into the game, Valpo held the Raiders without a field goal for nearly six minutes while slowly building a six-point advantage, 14-8.

An 8-0 spurt by the Crusaders, including a pair of three-pointers by Betsy Adams (Monticello, Ind./Twin Lakes H.S.), pushed the Valpo advantage to 12, 24-12, with 2:36 to play before halftime.  Wright State answered, cutting the lead in half before break, scoring the final six points of the stanza to pull within 24-18 at intermission.

Neither team shot 30% in the first half, but Wright State was held to 0-of-9 shooting from three-point range in the period.  The Raiders would go on to miss their first 18 triple tries of the game.

Out of the locker room the Crusaders got a pair of defensive stops and answered on the offensive end.  A three-pointer by Laura Richards (Connersville, Ind./Connersville H.S.) followed by a second chance trey by Adams pushed the lead back to 12 less than a minute into the second half.

“They missed a couple of shots and we hit a couple of big shots which gave us a cushion,” Freeman commented.  “It really gave us the momentum.”

Valpo held Wright State off of the scoreboard for the first four minutes of the stanza, and capped a 10-0 run with a jumper by Stefanie Lang (Valparaiso, Ind./Valparaiso H.S.) to extend the lead to 34-16.

The Crusaders maintained a 14 to 18 point advantage for most of the second half, and still led by 16, 47-31, with under 10 minutes to play.  Wright State clawed to within 12 three times in the next five minutes, but each time Valpo had an answer and the closest the Raiders would get down the stretch would be the final margin of nine on a LaShawna Thomas triple with three seconds to play.

Valpo made 20-of-24 free throws in the game, all in the second half, including 14-of-16 in the final four minutes to help preserve the victory.  Wright State finished the game just 6-of-28 from long range, with five of the threes coming in that final two minutes of the game.

Thomas led Wright State (13-8, 6-4 Horizon) with 27 points on 9-of-28 shooting and also had seven assists and six rebounds.  Molly Fox added 15 points and nine boards as the duo combined for 24 of the Raiders’ first 27 points of the game.

“In my mind (Thomas) is the most explosive offensive point guard in the league,” Freeman said.  “From the defensive standpoint we did a good job of getting to Fox in the post.”

Valpo outrebounded the league’s top team on the glass 53-40, including a 15-12 edge on the offensive boards.

“For a long period in the game we really executed from a defensive and rebounding standpoint,” Freeman added.  “We did a good job boxing out and didn’t give up a lot of second shots for most of the game.”

Valparaiso (5-17, 2-8) will conclude its four-game homestand on Saturday afternoon, hosting Detroit.  Tip-off is set for 1:35 p.m.

Game Notes: Valpo leads the all-time series 11-7, including an 8-2 advantage at the ARC … Adams matched a season high with five triples … Gerardot tied her career high for the third time with her 13 rebounds … Rashida Ray (Fort Wayne, Ind./Harding H.S.) had a career high with five assists … Adams made two more free throws and has now made 23 straight … Ashley Timmerman (Pontiac, Ill./Pontiac H.S.) made two free throws and is a perfect 21-for-21 at the charity stripe this season … the 73 points scored by the Crusaders were a season high.