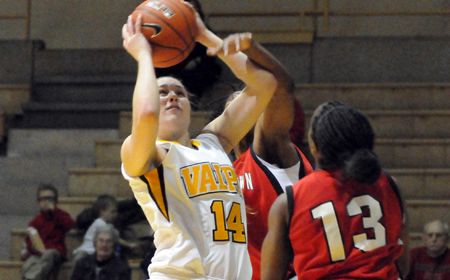 Valparaiso got 29 points from its bench on Saturday afternoon and utilized a 16-0 second half run to defeat Detroit 57-46 at the Athletics-Recreation Center for the Crusaders’ second straight victory.

With the win, the Crusaders have now won back-to-back games for the first time since November of 2009.

“I am really pleased with our kids,” head coach Keith Freeman said.  “They are really trying hard.  It’s difficult when you’ve been struggling like we have been, but we battled today and made plays.  It really shows the character of our kids.  Our bench gave us a lot of energy when they came in the game and I think we’ve played well in four of our last five games.”

Tabitha Gerardot (Fort Wayne, Ind./Canterbury H.S.) registered her sixth double-double as a Crusader, scoring 15 points and grabbing 10 rebounds, and Valpo’s defense limited the Titans to just 15.6% (5-of-32) shooting in the second half to rally from a seven-point deficit.

“Tab really wants to do so well,” Freeman added.  “She is a warrior getting to rebounds.  I like her tough-mindedness.”

Trailing 28-25 at the break, Detroit scored the first four points out of the locker room to take the seven-point advantage, their largest of the afternoon.  The Crusaders began to fight back, scoring 16 straight points after trailing 36-31, shutting out the Titans for seven-and-a-half minutes.

Six straight points by Gina Lange (Wyoming, Minn./Forest Lake H.S.) during the run, as well as five points by Gerardot paced the offense.  Meanwhile, the defense held Detroit scoreless from the floor for more than 11 minutes as the Titans missed 16 straight shots from the field.

By the time the run ended, Valpo held a 47-36 lead with 6:13 to play.  The advantage was still 10, 49-39, before the Titans made one late spurt.  Seven straight points, capped by three straight free throws by Dominique Dixon after she was fouled shooting from long range, pulled Detroit within 49-46 with 1:59 to play.

“They are a good team, a scary team,” Freeman said.  “We were fortunate we gave enough help and they never got in a rhythm in their offense.”

Skyler Gick (Otterbein, Ind./Benton Central H.S.) then found Gerardot down low as the shot clock was winding down made it a two possession game and the Valpo defense would not surrender another point the rest of the way.  Rashida Ray (Fort Wayne, Ind./Harding H.S.) made three free throws down the stretch and Gerardot added three more points as Valpo finished the game on an 8-0 run.

“Our kids battled,” Freeman commented.  “Down the stretch we got the ball inside and finished.”

Detroit jumped out to an early 14-8 lead before the Crusaders scored six straight points to knot the game midway through the first half.  After the Titans again built a five-point lead, Valpo answered a second time.  A 9-0 run by the Brown and Gold, capped by a jumper from Gick, gave the Brown and Gold a 25-21 lead.

As was the case in the first half though, the Titans answered with one more run, scoring the final seven points of the stanza to build the three-point halftime advantage.

“We’re still a long way from being a good offensive team,” Freeman added.  “But our defense is getting better.  I thought we did a good job controlling penetration and got back in transition.”

Lange added nine points and six rebounds for the Crusaders, as Valpo outrebounded Detroit 43-41, including a 27-19 advantage in the second half.  Gick and Stefanie Lang (Valparaiso, Ind./Valparaiso H.S.) each added eight points while Ray has seven more.  Gick also had six assists on the day.

“Skyler had a great floor game,” Freeman said.  “She ran the team well.”

Valparaiso (6-17, 3-8) will take to the road on Thursday evening as the Crusaders head to Cleveland, Ohio to battle Cleveland State.  Tip-off is set for 6 p.m. CST.

Game Notes: Gerardot’s double-double was her sixth of her freshman campaign but just her first in Horizon League play … the 46 points allowed were the fewest the Crusaders have surrendered all season … Gick’s eight points matched a season high … Valpo’s starters scored just five points in the first half and were 1-of-12 shooting from the floor … the win snaps a four-game losing streak against Detroit … the Titans still lead the all-time series 7-5 and hold a 4-2 edge at the ARC.