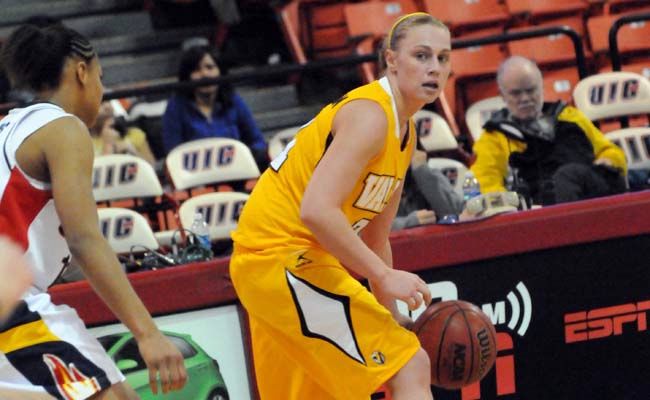 A 9-2 run late in the second half by Cleveland State proved to be the difference on Thursday evening as the Vikings defeated Valparaiso 57-51 at the Wolstein Center in Cleveland, Ohio to snap the Crusaders’ two-game winning streak.

Ashley Timmerman (Pontiac, Ill./Pontiac H.S.) came off of the bench to lead Valpo with 14 points, making three triples, while Tabitha Gerardot (Fort Wayne, Ind./Canterbury H.S.) had her seventh double-double of the year with 13 points and 10 rebounds for the Crusaders.

Valpo’s defense held the Vikings scoreless for the first four minutes of the game, building an early 5-0 lead.  The hosts missed their first five shots from the floor and committed three turnovers to open the game.

“We got off to a good start defensive,” head coach Keith Freeman said.  “We competed hard on that side of the ball.”

Cleveland State battled back as Valpo committed four turnovers over a five minute span and after a Shawnita Garland triple with 8:55 to play before halftime, the Vikings had a 14-12 lead.  Garland had three of her five steals during the spurt.

“When we went to our bench we turned it over a lot,” Freeman added.  “Garland can really get after you.  Everything becomes more rushed because of her.”

The Crusaders fell behind by four before an 11-0 run put the Brown and Gold on top 25-18 with under two minutes to play in the first half.  Back-to-back three-point plays by Timmerman and Gerardot down low followed by a Timmerman triple spearheaded the run.

The Vikings battled back, tying the game at 25 before halftime, but another Timmerman three in the final seconds gave Valpo a 28-25 lead at the break.

Offensive woes to start the second half hurt the Crusaders.  Valpo started just 1-of-8 from the floor while the Vikings made four of their first five to retake the lead, 35-33.  The Crusaders continued to struggle from the field, but made 5-of-6 free throws to offset a 2-for-14 start from the floor, and had the game tied at 37 with 11:31 to play.

A 9-2 run in just over three minutes then proved to be the difference as the Vikings took a 48-41 lead.  Four of Cleveland State’s points came off of Crusader turnovers.

The lead stayed between five and eight over the final six minutes, and was cut to five a final time after Betsy Adams (Monticello, Ind./Twin Lakes H.S.) made her only triple of the game with 36 seconds to play.  Following a missed free throw by the Vikings, Timmerman had another good luck from three in the final 20 seconds, but was just long and Cleveland State held on to win.

“If that shot falls, I feel like we had a chance,” said Freeman.

Valpo finished the game shooting 31.5% from the floor, but just 25% in the second half, including 1-of-9 from three-point range.  The Crusaders finished with 19 turnovers in the game.

“Our depth hurts us when we don’t have it,” Freeman added.  “We need some consistency and need all of our players on the same page.”

Shalonda Winton led Cleveland State (13-10, 6-6 Horizon) with 18 points and 11 rebounds while Destinee Blue also had a double-double with 13 points and 11 boards.  The Vikings shot 34.9% from the floor but committed just 13 miscues.  The hosts also had 12 steals in the game.

“Their defense put a lot of pressure on the ball,” Freeman concluded.  “I’m pleased that from a defensive standpoint we did a better job.  They were at 34% shooting and in the 50s scoring.  We just need to execute better offensively.”

Valparaiso (6-18, 3-9) remains in Ohio on Saturday as the Crusaders head down the road to Youngstown, Ohio to battle the Penguins of Youngstown State.  Tip-off at the Beegley Center is set for 3:35 p.m. CST, a change from the initial scheduled time.