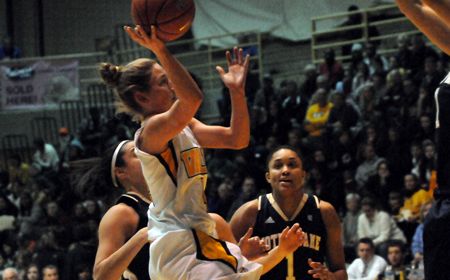 Trailing by 13 points with just over six minutes to play, Valparaiso closed with a 20-3 run, taking the lead on a lay-in by Skyler Gick (Otterbein, Ind./Benton Central H.S.) with 15 seconds to play, and defeated Loyola (Chicago) 72-68 on Thursday evening at the Athletics-Recreation Center.

“I’m really proud of our kids,” head coach Keith Freeman said.  “We were short-handed but we battled all the way back.  When you see kids going after loose balls and have the energy and emotion we did down the stretch, you can feed off of it.”

Valpo was down 65-52 with 6:16 to play after a lay-in by Monica Albano before mounting the comeback.  Rashida Ray (Fort Wayne, Ind./Harding H.S.) hit a triple and Gerardot followed on the next possession with a second chance basket to cut the deficit to eight.

“Rashida hit a big shot then locked in on defense and got a tie up defensively,” Freeman said.

Ashley Timmerman’s (Pontiac, Ill./Pontiac H.S.) three at the 3:49 mark pulled Valpo to within seven, only to have the Ramblers answer with an old-fashioned three-point play down low by Brittany Boeke.

Still trailing by eight going under three minutes, Lang scored inside and, after a defensive stop, Adams nailed a triple to make it 68-65 Loyola with 1:48 remaining.  Lang then poked the ball free on defense and Adams nailed another triple to tie the game with just over a minute to play.

“We had two big shots by Betsy, a big deflection by Stef Lang, and a big recovery by Skye down the stretch,” Freeman added.

Albano missed a three and Valpo moved down court with under 30 seconds to play.  Gerardot, underneath, found Gick on the other side of the basket, and the sophomore laid it in, giving the Crusaders their first lead since 10-8, with just 15 seconds left.

Gick added a steal in the final seconds and Timmerman made two free throws with 2.0 seconds left to seal the victory for the Brown and Gold.

“We did the things we needed to down the stretch to put ourselves in position to come back,” Freeman said.

The first half was tight most of the way until the Ramblers closed the stanza on a 7-0 run over the final 2:06 to take a 39-31 lead into the locker room.

The lead grew to 10 as Loyola hit the first basket of the second half before the Crusaders made their first run of the period.  A triple by Ray followed by her steal and score pulled the Brown and Gold within 45-43 with 15:39 to play.

Loyola answered with a 10-1 run to push the lead to 11 just three minutes later, and had its largest lead, 63-49, with 8:45 to play before the Crusaders began their final rally.

Gerardot led the Crusaders with 13 points and pulled down 11 rebounds for her ninth double-double of the year, and fourth straight.  Lang added 12 points and a career-high 11 boards for her double-double while Adams also added 12 points, all on three-pointers.  Ray had 11 points, making 3-of-4 triples and Maegan Callaway (Mooresville, Ind./Mooresville H.S.) added a career-high eight points off of the bench.

“Callaway had moments where she had an impact on the game in the low post,” Freeman commented.

Gick finished with six points and matched a career high with seven assists.

“I was pleased with our team’s ability to handle the basketball tonight,” Freeman concluded.  “Only eight turnovers and 19 assists is a very good ratio.”

Abby Skube led Loyola (11-13, 5-8 Horizon) with 26 points and nine rebounds, making 10-of-13 shots from the floor.  Albano added 19 points while Brittany Boeke pulled down 12 rebounds.  Katie Kortekamp had a game-high eight assists for the Ramblers.

Valparaiso (7-19, 4-10) will look for its fourth straight home win on Saturday morning as the Crusaders host UIC.  Tip-off is set for 11:05 a.m. at the ARC.  Saturday’s game is the Crusaders’ annual WBCA Pink Zone game, and fans are encouraged to wear pink.

Game Notes: Valpo is now 17-2 all-time against the Ramblers after sweeping the season series … the Crusaders have never lost to Loyola at the ARC … Valpo’s eight turnovers were a season low … Adams now has 143 career triples, passing Heidi Diefenthaler (1992-1996) and moving into eighth all-time on Valpo’s career charts … Adams also now has 65 threes on the season, tied for ninth most all-time at Valpo … Valpo has won three straight at home for the first time since Nov. 14-22, 2009 … Lang’s previous career high in rebounds was 11 … the Crusaders tied a season-high as a team with 10 three-point field goals … Valpo’s 19 assists also were a season high … Timmerman’s consecutive free throw streak to start the season ended at 24 as she missed her first attempt of the game.