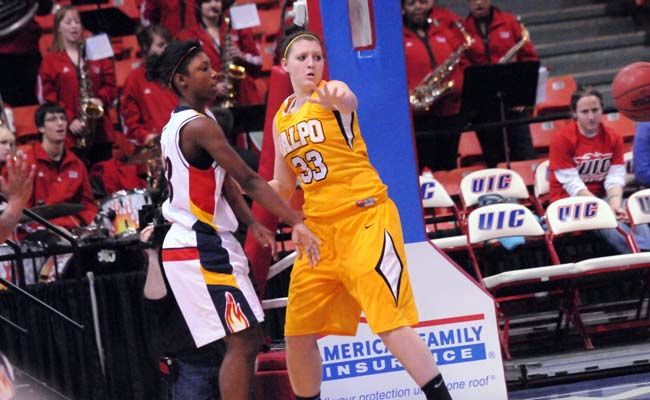 Two runs early in the game broke the game open on Thursday evening as #17/13 Green Bay defeated Valparaiso 75-48 in front of 2,237 fans at the Kress Events Center in Green Bay, Wis.

“Green Bay is a very good team,” head coach Keith Freeman said.  “They are very physical and may be the best defensive team in the country.”

The Phoenix opened the game draining a pair of three-pointers before Tabitha Gerardot (Fort Wayne, Ind./Canterbury H.S.) got the Crusaders on the scoreboard with back-to-back put-back baskets.

Turnovers proved to be Valpo’s downfall though, as the Brown and Gold committed seven miscues in the game’s first five minutes.  A 14-2 Green Bay run pushed the hosts’ advantage to 20-6 eight minutes into the game.

“They make it hard to move the basketball,” Freeman added.  “They pressure every pass.”

Green Bay made nine three-pointers in the opening stanza and the Phoenix forced 16 Crusader turnovers leading to 21 points.

Valpo played nearly even with Green Bay in the second half, cutting the deficit to 22 with under seven minutes to play.  The Phoenix never let the Crusaders get any closer tough, as they claimed their 17th consecutive victory and clinched the Horizon League regular season title.

“We gained a lot from this game though,” Freeman added.  “We played a good second half and handled the pressure better as the game wore on.  They only scored 30 points in the second half after scoring 45 in the first.  I was also pleased with the production from the kids off of the bench.”

Lang led the Crusaders with 11 points and pulled down eight rebounds while Gerardot added 10 points.  Valpo shot 39.5% from the floor but finished the game with 28 turnovers.

“We had two freshmen lead us in scoring,” Freeman concluded.  “We need to continue to build and develop the kids.”

Valparaiso (7-21, 4-12) will close out the road portion of the 2010-2011 regular season on Saturday afternoon when the Crusaders head down the road to face Milwaukee.  Tip-off against the Panthers is set for 2 p.m. at the Klotsche Center.

Game Notes: Green Bay leads the all-time series 22-4 and has won seven straight meetings … Valpo made three three-pointers and now has 194 for the season, tied for fifth most in program history … the 12 attempts from long range give the Crusaders 588 for the year, third most all-time … Stephanie Thomas (Avon, Ind./Avon H.S.) had a career high three steals.