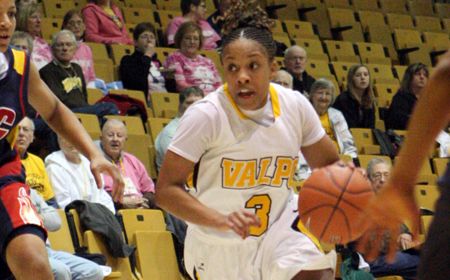 Valparaiso was within one point of Butler with under nine minutes to play on Saturday afternoon, but the Bulldogs pulled away down the stretch to defeat the Crusaders 58-47 at the Athletics-Recreation Center to spoil Senior Day for the Brown and Gold.

The Crusaders outrebounded Butler 45-29, including a 19-6 advantage on the offensive glass, however 19 turnovers and 26.4% shooting for the game proved to be costly for Valpo.

“I was proud of our kids because in the effort stat of rebounding we did well,” head coach Keith Freeman said.  “That’s how we were able to score, second chance points.  We made second and third efforts to get to the ball.”

Valpo hung close with Butler in the first half.  Despite shooting just 29.2% from the floor in the first 20 minutes, the Crusaders trailed by just two, 25-23 at the break.

Butler raced out to a 7-2 lead before Valpo went on a 10-2 run, taking a 12-9 lead following a Stefanie Lang (Valparaiso, Ind./Valparaiso H.S.) jumper just outside of the paint.  The Bulldogs answered and the lead changed hands eight times in the first half before Butler went on an 8-2 run to push its advantage to seven, 25-28.

The Crusaders answered with the final five points before the break, scoring on a three-point play inside by Lang and a pair of free throws by Betsy Adams (Monticello, Ind./Twin Lakes H.S.) to cut the lead to two.

Valpo extended its run out of the locker room with back-to-back three-pointers by Rashida Ray (Fort Wayne, Ind./Harding H.S.) and Adams, taking a 29-25 lead.

Butler again answered with a 12-2 run, building a six-point lead following a triple by Brittany Bowen.

Again the Crusaders clawed back, pulling within a point, 39-38, with 8:51 to go after an offensive put back by Gina Lange  (Wyoming, Minn./Forest Lake H.S.). Lange finished the game with seven offensive rebounds.

“She’s a true blue collar player,” Freeman said.  “She gives you that every day in practice and plays the game the same way.”

Valpo would not score another field goal over the final 7:50 of the game though, as Butler slowly pulled away.  An 8-0 run pushed the advantage to double figures with 4:29 to play and the Crusaders could not bring the deficit closer than six the rest of the way.

“The defensive was there today,” Freeman said.  “We held them in check scoring wise based upon what they have done this year against other conference teams.  We just had trouble scoring.”

Adams led the Crusaders with 10 points, making 7-of-8 free throws.  Her string of 44 consecutive free throws made dating back to Dec. 4 came to an end as the junior missed her final attempt of the game.

“We’re closing the gap from where we were earlier in the year,” Freeman said.  “We’re close to being the competitive team we want to be and have done a much better job the second half of conference play.  In the first half we weren’t.  Everyone starts over at zero and zero now and we have to just go out and compete.”

Valparaiso (7-23, 4-14) will return to action on Monday evening as the 10th seed in the Horizon League Championship.  In the first round the Crusaders will travel to Calihan Hall and face the seventh-seeded Detroit Titans.  Tip-off is set for 6 p.m. CST.

Game Notes: Valpo’s three seniors, Ray, Kelly Watts (Gary, Ind./East Chicago Central H.S.), and Stephanie Thomas (Avon, Ind./Avon H.S.) were all honored prior to the game … Thomas made her first collegiate start on Saturday … Adams moved into a tie with Megan Newcomer (1996-2000) for seventh all-time with 145 career three-pointers … Butler leads the all-time series 20-5 and has won four straight meeting between the instate schools.