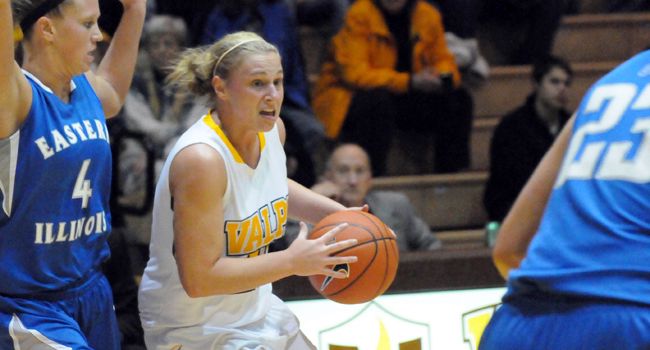 Upcoming in Crusader Basketball: After registering their first Horizon League victory of the season last Saturday afternoon, the Valparaiso Crusaders return to the hardwood on Thursday evening, traveling to the Windy City of Chicago to battle the Ramblers of Loyola (Chicago).  The Crusaders will play five of their next seven games away from the Athletics-Recreation Center beginning on Thursday.

Head Coach Keith Freeman: In his 18th season on the Valparaiso bench, Keith Freeman has a 281-237 (.542) record at the helm of the Brown and Gold.  In his 23rd season overall, Freeman has a 410-284 (.591) career mark.  He is Valpo’s all-time winningest coach and has amassed more than half of the victories in the program’s history.

Series Notes: Valparaiso and Loyola are meeting for the 20th time in a series that dates back to 1994.  The Crusaders hold a 17-2 all-time advantage against the Ramblers and have won six of the last seven meetings against the Ramblers.  Valpo swept the season series last year, winning 65-58 in Chicago on Jan. 22 and 72-68 at the ARC on Feb. 17.  Valpo is 8-2 all-time against Loyola in Chicago.

Wrapping Up Butler: The Crusaders fought back from a seven-point second half deficit and earned their first Horizon League victory of the season on Saturday afternoon at the ARC, downing the Bulldogs 58-53.  Valpo made a season-high eight three-pointers in the win.  Ashley Varner led the Crusaders with 13 points while Tabitha Gerardot and Ashley Timmerman added 12 points each.  Laura Richards tallied nine points, 11 rebounds, eight assists, and four steals.  Mandy McDivitt led the Bulldogs with 18 points off of the bench.

Scouting Loyola: The Ramblers have won two straight games following an 85-67 victory at Cleveland State last Saturday afternoon.  Simone Law leads Loyola offensively scoring 14.0 points per game while pulling down a team-best 7.4 rebounds per night.  Patrice King (13.9 ppg), Monica Albano (12.4 ppg), and Troy Hambric (10.7 ppg) give the Ramblers four double figure scorers this season.  The Ramblers are tallying 67.2 points per night while allowing 64.0 points per contest.  Loyola is the Horizon League’s top three-point shooting team at 39.0% and have blocked a league-high 93 shots (5.5 per game).  The Ramblers are just 2-5 at home this season.

All of the Little Things: Laura Richards may not have led Valpo in scoring last Saturday against Butler, but she sure filled the stat sheet.  The  junior point guard finished the game with nine points, making 7-of-8 from the free throw line.  She pulled down a career-high 11 rebounds, her first double figure rebounding game.  The biggest board was the last, grabbing her own missed free throw with 8.2 seconds remaining to secure the victory.  Richards also tied a career high with eight assists and added four steals while playing 39 minutes.

From Downtown: Valparaiso made a season-high eight three-point field goals in the victory over the Bulldogs on Saturday.  The Crusaders had not made more than six in a game all season prior to the win and had connected on just 2-for-33 from beyond the arc in their previous two games combined.

Timmy Catches Fire: Ashley Timmerman got dialed in from long range against Butler, making 4-of-7 three-pointers, the most triples by a Crusader this season.  Timmerman finished the game with 12 points after having tallied just eight points total since Dec. 28.

No Hotels Needed: Even though Valpo embarks on a two-game road trip beginning on Thursday, the Crusaders will be able to sleep in their own beds.  Valpo will commute up and back to Chicago for both games and will not spend a night away from home the entire month of January.

Gerardot a Consistent Scorer: Tabitha Gerardot continues to be a go-to scorer for the Crusaders this season after tallying 12 points against Butler.  The sophomore post has tallied double figures for the Crusaders in 11 of her last 12 games and now ranks 12th in the conference in scoring averaging 12.6 points per night.  Gerardot has scored at least seven points in every game this year for Valpo.

Playing Defense: Valpo lead the Horizon League in scoring defense this season, allowing just 56.3 points per contest.  The Crusaders have allowed just one opponent to score more than 70 points against them (Montana State, 71) and have held five teams to 50 points or fewer for the game.

Moving Up the Rebounding List: Ashley Varner has continued to climb the Crusaders’ all-time rebounding charts this season.  The fifth-year senior has pulled down 470 career boards, passing Robyn Lippert (1987-1991) for 16th on the all-time list after her nine-rebound effort last Saturday against  Butler.  Varner is just 25 boards behind Denise Dunbar (1982-1986) for a spot in the top-15 all-time.

Richards on Career Assists Chart: Laura Richards has moved into 13th place all-time at Valpo with 240 assists, passing Jeanette Gray (1999-2003) on the career charts.  She is seven assists behind Megan Newcomer (1996-2000) for 12th on the all-time list.  Richards is 17 helpers shy of moving in the career top-10 at Valpo for assists.

Not Much Contact Here: With such a short bench, fouls have become a premium this season for the Crusaders.  Valpo has done a good job of staying out of foul trouble all season, committing just 205 total fouls in 16 games, an average of 12.8 per contest, the seventh fewest in the country.

Who’s in the Lineup Tonight?: Due to injuries and illnesses this season, only three Crusaders have appeared in all 16 games this season.  Gina Lange, Tabitha Gerardot, and Ashley Varner are the only players that have played in and started each contest.

This and That: Ashley Timmerman posted a career high with three steals against Butler ... Ashley Varner grabbed nine rebounds against the Bulldogs and now has pulled down nine or more boards in 10 of the last 12 games ... Laura Richards ranks 33rd in the country averaging 3.0 steals per game and has registered four or more steals in six of her last seven games ... Tabitha Gerardot is averaging 14.0 points per game in Horizon League play.