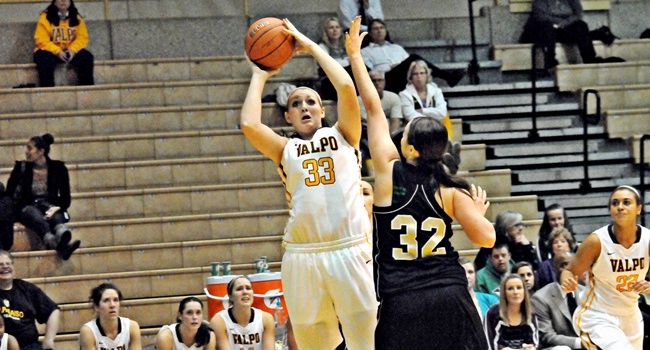 The Valparaiso women’s basketball team shot just 29.7% from the floor on Monday night in dropping a non-league contest at Butler, 69-55, in Indianapolis, Ind.

Valpo placed three players in double figures, led by 12 points in just eight minutes off the bench from redshirt sophomore Maegan Callaway (Mooresville, Ind./Mooresville), but hit just 19-of-64 from the floor, including just 2-of-12 from 3-point range.

Butler led by six early less than four minutes into the game, 9-3, but the Crusaders would score the next 11 points to claim the lead.  Freshman Jessi Wiedemann (Palatine, Ill./Fremd) had five points during the run, while junior Tabitha Gerardot (Fort Wayne, Ind./Canterbury) added four points as Valpo led 14-9 with 10:27 to go in the first half.

But Butler scored the next eight points over a stretch of 95 seconds to re-claim the lead for good.  The Bulldogs led by as many as 11 points in the first half, but back-to-back baskets within the final minute by redshirt junior Charae Richardson (Lafayette, Ind./Jefferson [Vincennes]) closed the deficit to 32-26 at the break.

Sophomore Shaquira Scott (Wilmette, Ill./Loyola Academy) hit a pair of free throws on the Crusaders’ first possession of the second half, and senior Gina Lange (Wyoming, Minn./Forest Lake) added a fast-break layup as an 8-0 run which spanned the two periods closed Valpo to within 32-30 with 19:09 to play.  On multiple occasions in the second half, the Crusaders were within one possession, including twice within one point, the latest coming on a Callaway three-point play with 13:59 to play which cut the lead to 45-44.

Butler extended its lead back out to eight points at 54-46 with 9:20 remaining, but Callaway sandwiched a pair of buckets around a Gerardot basket in the paint to move Valpo back to within 54-52 with 6:56 to play.  But the Bulldogs scored the next nine points over a stretch of 3:45 to secure control of the game.

Butler (2-2) was led by 22 points from Taylor Schippers to go with 16 points from Daress McClung and 13 by Hannah Douglas.  Douglas posted a game-high nine rebounds, while Lexus Murray dished out a game-best six assists off the bench.

Valparaiso (2-2) continues its road trip as it takes on one of its highest-ranked opponents all-time, as the Crusaders travel to Durham, N.C. to take on top-five foe Duke on Friday at 7 p.m. CT.  The game can be heard live on WVUR, 95.1 FM, Valparaiso.  Links for the live audio, as well as live stats, can be found at www.valpoathletics.com.