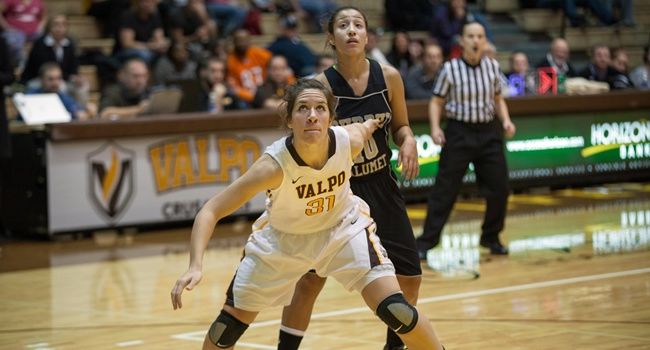 The Valparaiso women’s basketball team went on a 20-5 run over a six-minute span in the second half against IPFW to take a 14-point lead and never looked back in getting its first road win of the season with an 82-73 victory over the Mastodons on Tuesday night.

“We got some key stops and were able to push the ball in transition,” said Crusader head coach Tracey Dorow. “We got the ball down low. There were mismatches that we took advantage of down low. We gained confidence and made some baskets.”

Trailing 49-48, Liz Horton (Cannelburg, Ind./Barr-Reeve) opened the spurt with a basket in the lane. Lexi Miller (Caledonia, Mich./Caledonia) and Maegan Callaway (Mooresville, Ind,/Mooresville) then each made 3-pointers to put the Crusaders up 56-51.

After a pair of free throws from Charae Richardson (Lafayette, Ind./Jefferson [Vincennes]), two baskets from Tabitha Gerardot (Fort Wayne, Ind./Canterbury) sandwiched a layup from Callaway to put Valparaiso up 10. Richardson added a jumper after a defensive stop and then got a steal on the next possession and fed Gina Lange (Wyoming, Minn./Forest Lake) for a layup to give the Crusaders their biggest lead of the game at 68-54.

“She definitely got after people on defense,” Dorow said of Richardson, who finished with a career-high 15 points and also dished out six assists. “She took her time and let the game come to her. She feeds off of others. She made a couple of tough drives and some big shots as well.”

Lange led the Crusaders with 18 points, including 10-of-10 shooting at the free throw line. Gerardot chipped in with 17 points on 8-of-16 shooting from the field. Each player pulled down six rebounds.

“We really tried to get the ball inside,” said Dorow. “At least one of (Lange and Gerardot) had a perimeter player on them at all times, and it was tough to stop them inside.”

Valparaiso finished 27-of-54 from the field and had a 36-20 edge on points in the paint. The Crusaders also totaled a 32-22 rebounding edge.

The Crusaders closed the first half on a 25-13 run over the final 11:15 to take a 34-32 lead into the break. Gerardot had 10 points during the run. Miller finished the final Crusader possession of the half with a layup with 12 seconds to go. Miller and Laura Richards (Connersville, Ind./Connersville) each had offensive rebounds to keep the possession alive.

Richards finished with nine points, while Miller and Shaquira Scott (Wilmette, Ill./Loyola Academy) each chipped in with seven.

Valparaiso (3-5) continues its four-game road trip on Saturday night when the Crusaders visit #8/8 Lousiville at 6:30 p.m. CT. The game can be heard live on WVUR, 95.1 FM, Valparaiso and online at www.valpoathletics.com, which will also have a link for live stats.